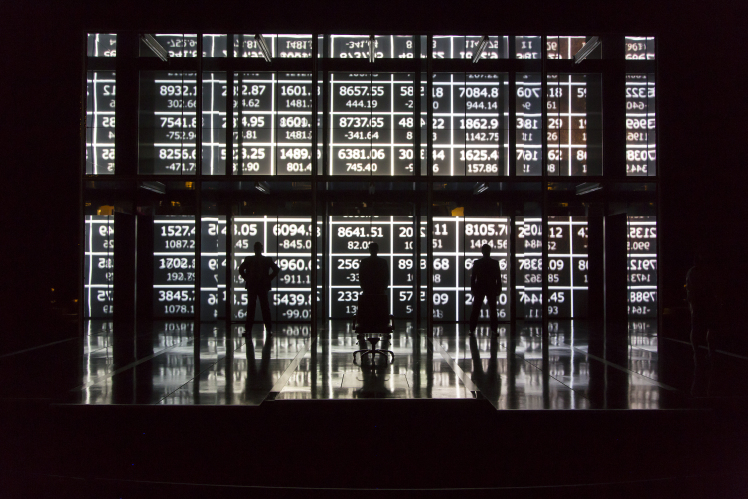 LCT’s Junk: Lots of Money Spent on Some Good Junk

LCT’s Junk: Lots of Money Spent on Some Good Junk 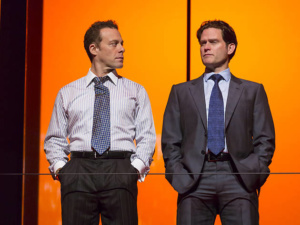 This is a story of Kings, or so we are told. But not the kind of Kings that we would look up to with respect. Definitely not noble ones or gracious ones, because Junk, the new play by Pulitzer Prize winning playwright and novelist, Ayas Akhtar (The Invisible Hand, LCT3’s The Who & The What) is delivering to us a different kind of type of King, one that is all about greed and power. Playing it pretty close to the rise and fall of supertrader Michael Milken, the ‘Junk Bond King’ (of which I know so little about, by design) and emphasizing the ‘greed is good’ mantra of Wall Street in the 1980’s, this royal court, while not lacking in drama and intrigue, has discarded almost all the qualities of ‘doing good’ and ‘being honest’ for the darker shades of duplicity, lies, and betrayal. 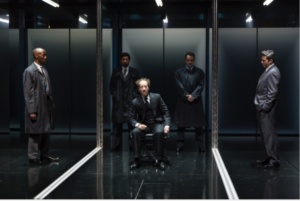 The writing borders on Shakespearean in its decidedly Machiavellian discontent. It’s expansive in its dense storytelling, complex in its plot, and concise in its structure. The production reeks of money well spent in its huge cast and stylistic design. It does seem to lack a certain upending of societal stereotypes that I expected from the man who brought us the complicated and curvy Disgraced. In that play, there were numerous shades of grey and nothing resembled their face value. Here, in Junk, the villains are plentiful but obvious and even the saviors compromised or destructive. Maybe you could say that in this tale of greed, we are given varying shades of black, with not a lot of differing tonal quality to look at. 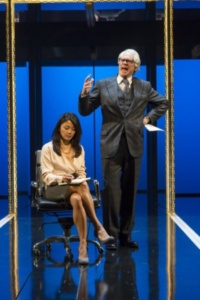 The play, as directed by the always solid Doug Hughes (The Father) is crisp and precise. The whole cast of characters that surrounded Milken back in 1989 when he was indicted for racketeering and securities fraud have been assembled on this glistening stage by Akhtar, with slight name changes but sticking fairly close to the raw and dark material. Instead of Milken, we have the magnetic Steven Pasquale (Encores’ Assassins, The Robber Bridegroom) portraying ‘Junk Bond King’, Robert Merkin with a cocky arrogance that works amazingly well. In the same manner, we have stand-ins for mayor-to-be Rudolph Giuliani, namely Giuseppe Addesso (Charlie Semine), and the infamous stock trader Ivan Boesky in the form of Joey Slotnick (Broadway’s The Front Page) as Boris Pronsky. The pack of royal hanger-ons is filled out with a female reporter, Judy Chen, played by Teresa Avia Lim (PR’s The Moors) trying to shine a bright and accusatory light on the corruption of Merkin’s Junk world, a wealthy old-school trader Leo Tresler, a nuanced Michael Siberry (Broadway’s Spamalot) who finds Merkin so distasteful that he will stop at almost nothing to ruin his deal, a not-to-be trusted shady but smart lawyer, Raúl Rivera, played by Matthew Saldivar (NYTW’s Hadestown), and a loud-mouthed cocky Isreal Peterman (Matthew Rauch). Closest to being the good guys, is the branch that makes up the Steel corporation at the center of this deal: Thomas Everson, Jr, played earnestly and tragically by Rick Holmes (Broadway’s The Visit), his faithful lawyer Maximilien Cizik (Henry Stram), and the more complex Jacqueline Blount, played with cunning and duplicity by Ito Aghayere (PH’s Familiar).  It’s a huge cast of professionals, working their magic on us, telling us this convoluted tale of shysters and criminals in very nice suits in a straight forward manner, in a way almost too well and too straight.

Junk is complicated and compelling, but I would add that Akhtar throws all the clichés and stereotypical behavior straight up and neat without a lot of surprises or twists of character. The one aspect I thought was compelling was in the character development of the Lady Macbeth stand-in, wife Amy Merkin, played impressively by Miriam Silverman (Public’s Hamlet, Tiny Beautiful Things). Although wanting Merkin to be true to her and play it legally safe, she is also the aggressive and smart force of nature behind the man; the Lady who has to inspire her would-be King Macbeth to do the dirty and power-seeking deed. It’s a strong characterization, one that I didn’t expect, but was grateful for the surprise (as there are very few).

For those of us, myself included, who don’t really understand all this Wall Street jargon, (we are told that this was by the establishment’s design, so we don’t comprehend its intricacies) or even want to, this play is as wonderfully sharp as the creative work done by set designer, John Lee Beatty (Sweat, LCT’s Dada Woof Papa Hot), lighting designer, Ben Stanton (Six Degrees of Separation, Fun Home), projections by 59 Productions (War Horse, An American in Paris) with original music and sound design by Mark Bennett (The Coast of Utopia), and costuming by Catherine Zuber (Oslo, War Paint) who thankfully held back from the big shouldered power suit from the 80’s. The time frame is definitely that period, but as our history tells us, this could happen during any decade. The tracking and blocking are like clockwork on that stunning glittery set that echoes the money’d 80’s and the coldness of this world. The production attempts to widen its judgmental gaze by bringing in some steelworkers but the cards are already so solidly stacked against them. This is all about the money, we are told, and we don’t need these workers to understand who’s getting screwed in the end. We all are too well versed in that subject and fully aware from the get-go. The nervousness we sit with is in the here and now, as we watch that industry be deregulated by our current administration. This fact only heightens the tension and deep meaning of this drama. The ending is witty though, as we see the vision of the future dancing before the dark King’s eyes, and it looks like this could be the beginning of a series of plays, with the first being a sequel, possibly called,  Junk 2: The Bank Collapse. What will Junk 3 be called? Junk 3: The Orange Monster Years? You tell me.

The Stowaway: A Shining Gem for All Ages
School of Rock The Musical – A Joyous Juvenile Jolt