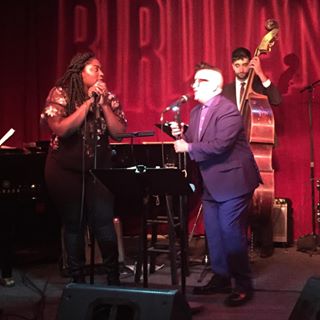 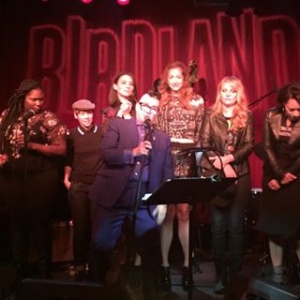 Lea and Orange Is the New Black cast and crew

I attended Lea DeLaria’s David Bowie tribute show at Birdland Jazz Club, last Saturday. Based on her fifth non-comedy album, DeLaria House of David: delaria + bowie = jazz, 12 covers of the icon’s greatest hits, DeLaria’s vocals were accomplished, warm, and in a class of their own. Best known for her role as Boo on “Orange Is the New Black”, her guest that night was the vocally powerful Danielle Brooks. In the audience the “Orange Is the New Black”, cast member cheered her along, as well as some of their crew and producers, who later joined DeLaria on stage.

DeLaria has been a staple on the queer scene for decades and her comedy leans more towards the crass, but her audience eats it up. DeLaria the night I attended was sick as she drank tea and blew her nose, but like a trooper forge on. There was actually more talking than singing, or so it seemed. Starting off with Bowie’s “Boys Keep Swinging”, sung with a bit of camp in the mix adding a sexuality to a new gender. If I hadn’t of known the song “Fame” and known this was a Bowie show I would not have recognized the song. Though the melodies of Bowie get distorted, the lyrics take center stage.

DeLaria’s jazz sensibility on “Ground Control to Major Tom” to “Space Oddity” took on a out of this world presence.

dded to the mix was Muddy Water’s “I live the life I love”, which DeLaria uses as a theme song to her life.

“Sunday Kind of Love” sung by Danielle Brooks was a powerhouse and became more like a “Saturday Night Kind of Love”. 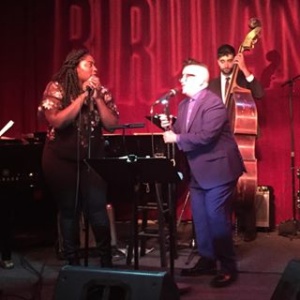 Lea and Danielle who have chemistry got together on”Hallelujah I love her So”, which was under rehearsed.

My favorite of the night was the funky “Let’s Dance”,  a swinging scat.

“Starman,” and “Life on mars” ended the set. With “Young American” sung by Lea and all of the people involved with “Orange Is the New Black”.
The audience left satisfied, but in a sense I missed the Lea who sang one of the best renditions of “The Ballad Of Sweeney Todd”, I have ever heard.
This show played for 5 nights and is now closed, however the CD DeLaria House of David: delaria + bowie = jazz is available on Amazon
Related ItemsBirdland Jazz ClubDanielle BrooksDavid BowieDeLaria House of David: delaria + bowie = jazzLea DeLariaNewOrange is the New Black
Cabaret

Suzanna BowlingMay 6, 2022
Read More
Scroll for more
Tap
Inside Voices For The Voiceless with Jonathan Groff, Danielle Brooks, Jessie Mueller, Stephanie Mills and More
November Events For NYC and Beyond