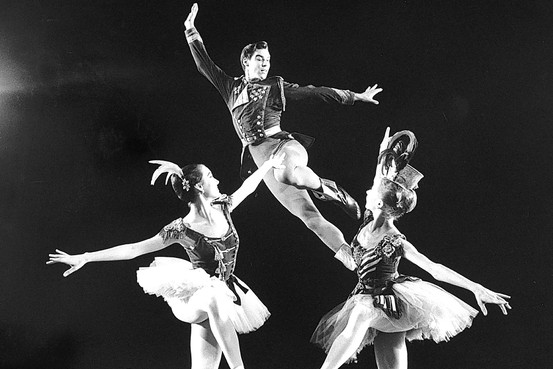 Jacques d’Amboise embodied masculinity as he led New York City Ballet to world fame. He showed his prowess in the MGM musical Seven Brides for Seven Brothers and took Louise’s heart in Carousel. D’Amboise died from complications of a stroke, he was 86. He passes his talent on to his son Christopher d’Amboise (born 1960) is an American danseur, choreographer, writer, and theatre director. Also daughter Charlotte d’Amboise who went on to star in A Chorus Line and Chicago.

d’Amboise believed in passing on the joy of dance to children and founded the National Dance Institute in 1976. He spent the past four-plus decades providing free classes to schoolchildren.

d’Amboise believed in the power of live performance writing; “I found it difficult to sustain enthusiasm [working in the movies] when you stop and start, stop and start, and by the end of the day, you’ve only danced a few steps. Performing with a ballet company, you’re in conversation with the audience, not the camera; it’s immediate, and there’s no going back to redo, repair or camouflage.”

At 12, d’Amboisehe performed with the Ballet Society, then joined the New York City Ballet three years later. In 1950, he made his European debut at Covent Garden in London. d’Amboise performed with the New York City Ballet for about 35 years. As a protégé of George Balanchine, he was seen in a 1955 Canadian broadcast becoming known as a legend of the NYC Ballet along with Tanaquil LeClercq in “Afternoon of a Fawn.” Here Jerome Robbins’ genius is on display in this take on the old Debussy/Nijinsky ballet.

A steamy duet in 1956, Michael Curtiz’s The Best Things in Life Are Free, NBC’s The Bell Telephone Hour dance specials kept him in the public’s eye.

On Broadway he performed in Shinbone Alley as Frankie with Eddie Bracken, Eartha Kitt and George S. Irving.

In the early ’80s he decided to end his dance career. “I was almost 50, there were only a few roles left that I could do. I was waiting to go onstage, and I suddenly thought, I don’t want to go on. I danced, came off, took off my ballet shoes and quit.”

Survivors include daughters, Charlotte and Catherine (they’re twins), and sons George and Christopher.