Legs Diamond Gets a Reprieve at Feinstein’s/54 Below

Legs Diamond Gets a Reprieve at Feinstein’s/54 Below

Feinstein’s/54 Below (254 West 54 Street NYC), Broadway’s Supper Club, presents the Original Broadway cast of the much heralded musical in Legs Diamond 30h Anniversary Reunion Concert on Sunday, December 3 at 7:00 pm and 9:30 pm. The concert, u/hich musicalized the prohibition era, is being produced and directed by original cast member Jonathan Cerullo. For the first time in NYC since its opening in 1989, the original cast of one of Broadway’s biggest and brightest flops, Legs Diamond reunites for one night only! With a beautiful score conceived and written by Grammy and Academy Award winner Peter Allen, and book by Harvey Fierstein and Charles Suppon, the concert features Christine Andreas, Brenda Braxton and Bob Stillman, and original cast members. Songs from the musical that never made it to the Broadway stage will also be highlighted. Carol Baxter is the associate producer. 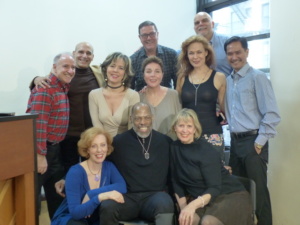 The cast of Legs Diamond

Despite its short run, Legs Diamond received three Tony Award nominations, including “Best Costume Design” for the legendary Willa Kim for her glorious 20’s designs, “Best Choreography” for Alan Johnson, and a nomination for “Best Featured Actress in a Musical” for the divine Julie Wilson for her show stopping number “The Music Went Out of My Life.” Set in a speakeasy during the Prohibilion Jazz age, Legs Diamond presented a fully automated set with computerized scenery, for the first time ever on a Broadway stage. Brenda Braxton’s role was expanded with “Speakeasy” written for her. She went on to perform various roles on Broadway including Jelly’s Last Jam. Smokey Joe’s Cafe (Tony Award Nomination) and Chicago. The unique show featured dancers emerging from a piano to reveal a forbidcten speakeasy, showgirls dripping in diamonds and lounging in giant champagne glasses, and the Gangland Ballet. 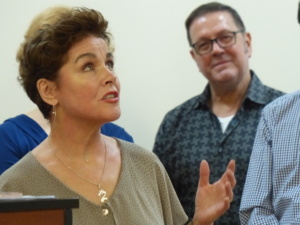 After a 6-week workshop, Legs Diamond went straight to Broadway. The musical opened at the Mark Hellinger Theatre on December 26, 1988, and had a record- breaking 72 previews, where production problems and technical issues were reported endlessly in the media. After another 62 performances, Legs Diamond closed on February 19, 1989. lt was the first time that the closing of a Broadway show was covered in the news. This would mark not only the end of the show, but also the end of the Mark Hellinger Theatre, which became the Times Square Church. 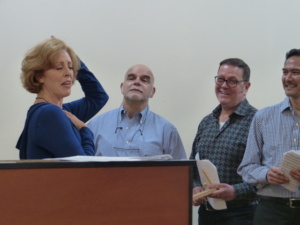 Peter Allen played “Legs” Diamond, based on real-life gangster Jack “Legs” Diamond who, among all other things was a song and dance man. The plot was filled with scenes of unrequited love and jealousy by the women who competed for Legs Diamond’s heart, played by Julie Wilson, Randall Edwards, and Brenda Braxton. Unfortunately, Christine Andreas and Bob Stillman (“Leg’s” wife and brother) whose voices and songs brought tears to cast members in rehearsals fell victim to the many cuts during previews. Their characters never made it to opening night.

ln addition to performing songs from the show, which include “When I Get My Name in Lights,” “Sure Thing Baby,” “Only an Older Woman,” “The Man Nobody Could Love,” “All I Wanted Was the Dream,” “The Music Went Out of My Life,” and “Say it lsn’t So;” cast members will share backstage anecdotes and their personal memories of working with the incomparable and charming Peter Allen.

ln the truest sense of the word, Peter Allen was a consummate song and dance man. As a performer, he was electric, flamboyant, and stopped at nothing to put on a captivating show. Whether it was making an entrance on a camel at his sold-out performances with the Rockettes at Radio City Music Hall, dancing on his baby grand, or strutting and shaking his marimbas wearing gold lame pants, he gave his audience a show to remember. Peter was a living icon. ln the early 1960’s, he began his career as one of the Allen Brothers, who were a popular television and cabaret act. He soon went off on his own, as Peter Allen, performing and writing songs. He was a prolific songwriter, collaborating frequently with Carole Bayer Sager, and also with Jerry Barry, Christopher Cross, Patti l-aBelle and Burt Bacharach, creating songs that climbed the charts and went on to win Academy Awards, such as “Arthur’s Theme.” Although he sang the majority of his songs and recorded ten studio and live albums, many of his songs became instant classic hits for various artists. “Don’t Cry Out Loud” sang by Melissa Manchester, “l Honestly Love You,” by Olivia Newton-John, “l’d Rather Leave While l’m in Love,” by Rita Coolidge, “l Go to Rio” popularized by the group Pablo Cruise and “You and Me (We Wanted it All” by Frank Sinatra. His song, “‘l Still Call Australia Home,” became a popular Patriotic anthem in Australia and was used widely in television commercials especially for Quantas Airlines. Loved by Judy Garland, ex- husband to Liza, and adored by his devoted followers, he performed at Carnegie Hall, Radio City Music Hall, Sydney Opera House for Queen Elizabeth ll, twice for Prince Charles and Princess Diana, at Disneyland’s 30’n Anniversary Celebration and on stages, both great and intimate, across the globe.He worked for years writing his Broadway musical Legs Diamond, inspired by the 1960’s movie that he loved as a teen, “The Rise and Fall of Legs Diamond.” After the unsuccessful run of his Broadway “Legs Diamond” and shortly before his death, he went on the road with Bernadette Peters on a successful concert run. His death in 1992 left a hole in the entertainment world, both as a unique and exciting performer and as a songwriter. His life was the inspiration for the musical The Boy from Oz staning Hugh Jackman, who won a Tony Award for Best Actor in a Musical in 2004.