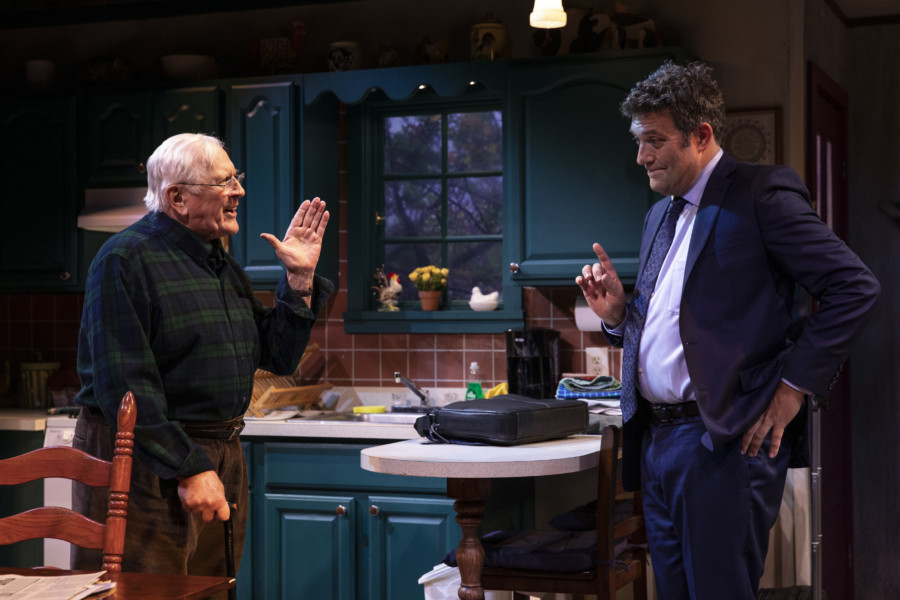 Len Cariou and Craig Bierko create a believable father and son in George Eastman’s Harry Townsend’s Last Stand at New York City Center. For over two hours Cariou proves why he won a Tony and has been playing on Broadway for over 50 years. Craig Bierko started off in TV and film but became Tony nominated with his first Broadway role in the Broadway revival of The Music Man and he continues his stellar work in this play.

Harry Townsend (Cariou) is an 84-year-old man stuck in his ways and not about to change. When his 45-year-old divorced real estate broker son Alan (Bierko) from San Diego shows up at the family cottage in rural Vermont for the first time in 18 years, Harry knows something is up. Scotch is drunk by the bottle, as the two bicker and banter in a a cat and mouse game of its time to move into an assisted living facility.

Harry knows this is the inevitable but fights for his dignity, his memories and his freedom. It is a losing battle. We know it Harry knows it and Alan knows it. For years Sarah has taken care of her father, ever since his beloved wife died. But even her mother wanted this journey. It is the only time the couple fought. Now Sarah needs to move with her husband to New York and Alan has been enlisted to help his twin accomplish this sad but inevitable process.

There is no choice. Harry has let the bathtub overflow, forgets to take 14 pills a day, has put the coffee pot is in the oven, the filters in the freezer, his underwear under the sink, has locked himself out of the house and more importantly has fallen more than once.

Cariou and Bierko are touching, funny and a fantastic team working in tandem to bring this experience to life. It is amazing the amount of lines they have memorized, especially Cariou. In their deft hands they have taken this writing to a new level.

Director Karen Carpenter, keeps the action moving and gives the play moments of humor, but Eastman’s has drawn this out for over two hours with an intermission and it needs to be 90 or less with no break. We go round and round in the same circles. Sadly the circle of life has gone in this direction, if you have the funding. Old age is no longer considered a gift but a burden and this show makes that point clear. At least harmony can be achieved with the passage of time.