Oh, you all look so snazzy. Just bursting with cheer.

You remember me, right? Oh, Im sure that you do.

When I was a youngster? I was Cindy Lou Who. 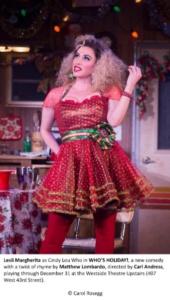 You remember Cindy Lou that adorable little tot, who the Grinch down in whoville patted on the rear. Well now Cindy Lou has grown-up, lives in a trailer, abandoned, still hopeful and speaks rather off handed. We have been invited into her home on the side of Mount Crumpit for a rather off color holiday tale of woe. This satirical spin by playwright Matthew Lombardo (Looped, Tea at Five, and High) on Dr. Seuss’ How The Grinch Stole Christmas, opened last night at the Westside Theatre Upstairs.

You recall my big eyes. My pink one piece pajama.

It was a present that year from my now dead great gramma.

Such an innocent I was. Oh, the ignorance of youth.

Then life starts to unfold and you get kicked in the tooth.

Who’s Holiday! has also had a long tale. It was originally announced for a 2016 premiere at New World Stages starring Tony nominee Jennifer Simard. The production was abruptly canceled less than a month as cease and desist letters arrived like unwanted presents from the Dr. Seuss Enterprises, citing copyright infringement. After a year-long legal battle, a United States District Court judge ruled in Lombardo’s favor, stating that his use of “outlandish, profanity-laden, adult-themed scenarios involving topics such as poverty, teenage pregnancy, drug and alcohol abuse, prison culture, and murder” subverted the expectations of the Seussian genre, and dismissed counterclaims of copyright infringement, trademark dilution, and unfair competition.

I can understand why Dr. Seuss would be perturbed, as this isn’t the cherry version you will have remember as a child. In this day and age of politically correct, get ready to be offended as Mr. Lobardo doesn’t leave anybody out.

But I’m getting ahead. I don’t mean to confuse.

I just hate Christmas Eve. As do some of you Jews.

See? My loathing stems from a deep-rooted place

In a town known as Who-ville, where I can’t show my face. 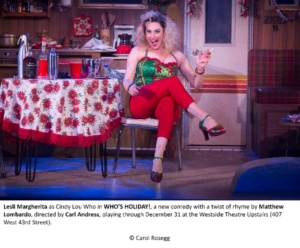 Olivier Award winner Lesli Margherita (Matilda) shines past this material creating a warm, gleeful, profanity spewing, lovable and oh so over the top performance. Dressed up like a Christmas present for hookers or drag queens by Jess Goldstein, Margherita takes tacky to a new high. She is Cindy Lou at 40, who after years of thinking of the Grinch, as her best friend gets defiled by him on her 18th birthday.

I’m really a homebody and just stay in this shelter.

And the liquor and pills well – Mama needs a ‘lil helper.

Where were we? Oh. Right. The first time I got laid.

And if you think black men are hung? Honey, try goin’ jade.

When she finds out she’s pregnant, they marry and she has a  green-tinged child named Patty. However the Grinch pushes Cindy Lou over the edge and well things go down hill from there.

We meet Cindy in her dilapidated trailer as her guests keep cancelling. Cindy takes it in stride by drinking, boozing and smoking up a storm. Her language in rhymed iambic pentameter couplets with four letter words thrown in. Some of this is witty, if not a like vulgar. She explains her sad little tale through story and song, where Margherita excels.

Carl Andress, directs this piece allowing Margherita to twist us around her little finger, which she does effortlessly.

This show is outlandish and if it had played before camp became improper and nobody could take a joke, I could see this running every Christmas. The audience I saw this with was laughing hilariously. Maybe irreverent is what we need to break this fear based obsession with what is naught or nice.

And yet you remain. None of you stir.

Maybe I was wrong about who my friends really were.

All of this time you’ve been in front of my eyes.

We laughed and we talked. I had fun with you guys.