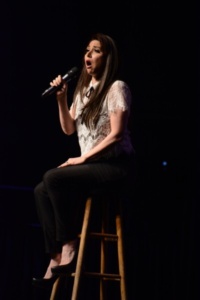 Lesli Margherita  recently seen as Mona Kent in Dames at Sea on Broadway. She won the 2009 Laurence Olivier Award for her performance as Inez in Zorro The Musical on London’s West End. Lesli starred on Broadway in Matilda as Mrs. Wormwood, a role she originated. Film work includes Opening Night opposite Topher Grace and Taye Diggs, and Lucky Stiff with Jason Alexander. Born and raised in California, Lesli trained at UCLA and her television credits include the upcoming “Donny!,” “Fame LA,” “Major Crimes,” “The Suite Life on Deck,” “Charmed,” “NYPD Blue,” “The District,” and “On The Lot.” Additional stage credits include The Gronholm Method at The Falcon, Aldonza in MTW’s Man of La Mancha opposite Davis Gaines for which she received an Ovation Award nomination, Kate in Reprise Theater’s Kiss Me Kate for which she won an Ovation Award, Julie in Show Boat at the Goodspeed, Audrey in Little Shop of Horrors at La Mirada, Lady of the Lake in Spamalot at Sacramento Music Circus, Ilona in She Loves Me at CLOSBC, the West Coast Premiere of Michael John LaChiusa’s See What I Wanna See at the Blank Theatre, Rated RSO at the Boston Court, and Gloria in Damn Yankees for Reprise Theater. Lesli’s book Neck Punch and Carry On: Advice from the “Queen,” a series of “inspirational” messages inspired from her Twitter feed (@QueenLesli), is available exclusively on iBooks. Lesli’s critically acclaimed nightclub act All Hail the Queencontinues to play to audiences in New York and LA. 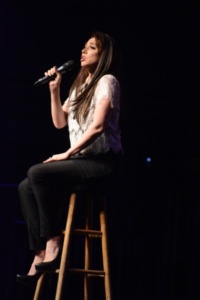 Yesterday at the BroadwayCon Cabaret Leslie sang “The Man That Got Away” and we got her on video. We apologize for the quality of the video, but the press was stuck on the side which is really hard to film. 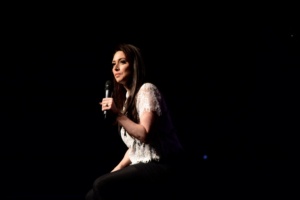 You can catch Leslie today at BroadwayCon at 6pm at the MainStage for the Leslie Margherita Variety Hour. 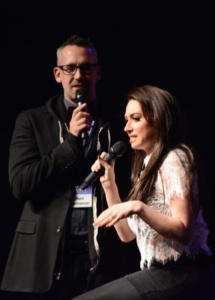