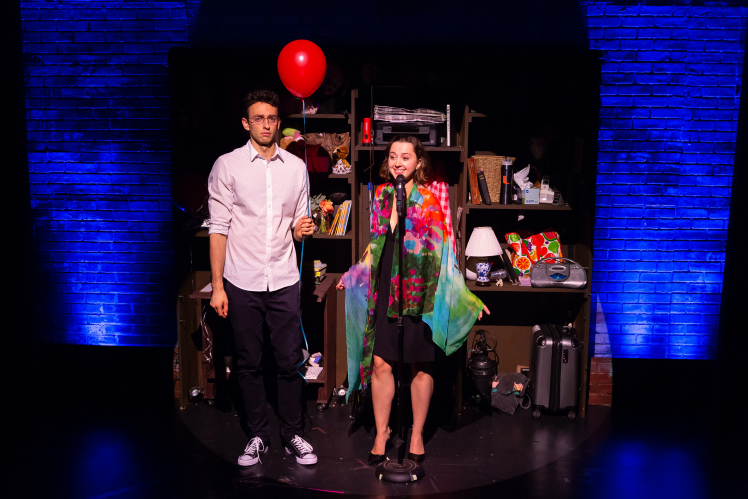 Less Than 50% Survives the Curvy Road, But Almost Sinks in the End

Less Than 50% Survives the Curvy Road, But Almost Sinks in the End

Less Than 50%, the one man (+ one woman) show is billed as an “unromantic comedy“, tracing a young actor’s on and off again relationship with a darling young actress he meets at college.  He has basically studied the Woody Allan/Seinfeld handbook on comedy and skepticism, especially in regards to marriage and the power of that one big word, “love“. You see, the show, created by its star, Gianmarco Soresi (web series: Matza Pizza), uses the statistic that Less Than 50% of marriages fail, so in the lead character’s mind, the self-named Gianmarco just can’t see why one would do that, dive into the pool of love and marriage if you are only going to drown, fifty per cent of the time…

But it begins with a big laugh and a groan, much like a Seinfeld television episode in its first few seasons, using the structure of standup to draw us in to this episode’s theme and story. Soresi, a true-to-life regular at Carolines on Broadway, West Side Comedy Club, and Stand Up NY, has a great and somewhat goofball presence behind the mic, with a funny in-your-face, big grin style, cracking jokes that land, for the most sake, well (although a few fall fairly flat, especially the overtly sexual ones).  He’s super engaging and quite funny in these spot light moments, pulling us in generously (even though you might think, like I, that he’s that guy that we would hate to be sitting beside at a big Jewish wedding).  He’s loud, bawdy, and somewhat sweet, diving into the set-up with nervous glee, telling us all exactly what kind of show this is. It’s a Woody Allen/Annie Hall telling of a true life relationship between himself and a girl that he met in college named Laura, detailed and dissected in all its glory and its messy ups and downs. And then much to our surprise, breaking the fourth wall, Gianmarco makes a confession to us all. He tells us, enthusiastically, that at tonight’s performance, the real life woman at the center of this story, Laura Cataland ,will in fact play herself for this one particular performance, enlivening us all with this one large meta-morphic piece of madness.

It’s all true, and it isn’t, all at the same time, the meet-cute, the delightful details, the tense dynamics, the quirky interactions, and the confessions of love and remorse.  They are all told through Gianmarco’s frantic big eyes and strong perspective, with Laura and the very fine and funny actress, Hanna Hale making multiple appearances in this delightfully deep story. Laura changes her clothes and her demeanor on a whim and often. “Why am I the only one changing clothes?” she says, courtesy of costume designer Samantha Rose Lind, and it’s a solid question that can only be answered with the simple fact that this is Gianmarco’s memory speaking and organizing the scenarios, and we should all be wary, as we are seeing exactly what he wants us to see and believe.

It’s wildly told, starting with that fun and funny intro and everything that follows.  The wedding dance party scene is solidly played, much like the altered perspective performances of a backward play within a play that places us right in the moments of creation, time and time again, sometimes on fast forward, and other times, not.  It’s quite strongly meta-layered, thanks to the slick directing by Jen Wineman (Animus’ Surfer Girl), in what at first seems to be a very well choreographed reincarnation of the events leading up to this very end moment.  It’s twisted like a winding road in the mountains, with moments feeling like the two might scarily just drive off the cliff because of the fast speeds they are going. But for the first two-thirds of the 80 minute piece, the curved road is tight but the driving is expertise. Meta to the maximum, we are amazed and entertained with the on and off again antics of this wildly engaging couple as they jump back and forth with ease from the ‘time back then‘ and the facsimile of the somewhat fake ‘here and now‘.  They slide the set pieces around, designed with an exacting eye by Ashleigh Poteat (NLTP’s Still Dance the Stars) and props person, Leila Ben-Abdallah, expertly recreating moments of interaction and disintegration with ease. Compellingly, Gianmarco flips between stand-up moments in the spotlight (strong lighting by Driscoll Otto, and sound design by Emily Auciello) and strongly worded two-handed scenes with Laura starting with the adorable first scene reading moment.  Both are charming and electric, especially in the well crafted moments of emotional distress via both Skype (good projection work by John Erickson) and a chaotic dress rehearsal all the way to performance mash-up.  To tell you more would ruin some of the fun, but its smooth sailing even through the rough patches for these two. That is until the big stormy crisis, and then, as if hit by a title wave, the boat starts to take on water as the sky grows dark and the winds shift.

In the end, it’s almost nightmarish, the Seinfeld stream of consciousness that comes in at approximately the two-thirds mark. It’s overly drenched in cynical drama and dark quirky cartoonish negativity.  It’s uncomfortable to partake in, throwing us into dark waters after what, at first, felt like a well paced romp. The highly stylized nighttime episode is overly long, oddly shaped, and unfortunately, it casually tosses away any smart dissertation on coupledom and family life. It snaps the connection away, leaving us detached and at a loss. Gianmarco somehow manages to almost right the two-manned rowboat just in the nick of time, paralleling his perplexed character as the actor/playwright tries his hardest to find an ending to his own play within the play. What the real life man ends up with doesn’t really save us from completely sinking, although the waters we find are selves in don’t seem so deep that we are afraid of drowning. Both the character and the real life playwright desperately try to wrap things up and patch the holes of this quirky tale with a love bandaid of sorts, but never fully manages it.  The boat has taken on too much water of the disappointing variety, so quickly that in the end Less Than 50% drops down to about 40 or less. You won’t drown, but you will have forgotten some of the fun you had before the Seinfeld iceberg came along and messed things up.

Be More Chill: The Awesome New Musical Taking the Off-Broadway World by Storm
Coming to Grips With the Past in Swan Song