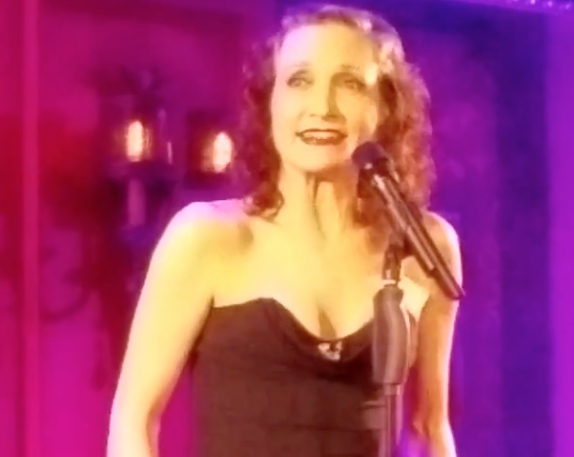 There are some people you just like to be in a room with. One of them is the stunning Bebe Neuwith. Everyone in the room with me cheering at Feinstein’s/54 Below last night seemed to agree about that. Ms. Neuwirth was at 54 Below to present an encore engagement of her one woman cabaret show, Stories with Piano #1.  The #1, she tells us, is just because “one is the loneliest number!”

Let’s start with what a show biz babe she still is, pure and simple. Even though she’s pushing sixty, she’s trim and strong like a racehorse. She rocked an outfit of black sequined pants and a stylish, low cut, fitted black top, her sexy shoulders glowing with a dewy youthfulness. This made her the envy of every woman in the room, and raised the blood pressure of every heterosexual guy there, including me.

Not only does she still look great. She also has a youthful energy and fluidity of movement that makes her almost girlish, in a good way. This distinguished her cabaret performance, also in a good way, from that of another trim and pretty but far less physical cabaret performer I saw last week, Karen Akers.

Add to that Ms. Neuwirth’s well honed acting chops, sense of humor, and mesmerizingly sexy speaking voice, and you get what makes a real star.

But this is supposed to be a musical evening. From a musical point of view, sad to have to say, it left a lot to be desired. Ms. Neuwirth has never really been known as a great singer. This was a big issue for some people when she played Morticia in The Addams Family. The trouble is, she desperately needs someone to help her understand what she does and doesn’t do well vocally.

As an actress, she is formidable. When she speaks, it is compelling. When she speaks on pitch, without trying to sing, she manages to sound like she is singing and it’s perfect for her. Ms. Neuwirth was touching, funny, natural, and always convincing whenever she approached her material this way.  She was particularly effective in her dramatic renditions of the Kurt Weill story songs, The Bilbao Song and Surabaya Johnny, both from their musical Happy End. She also was very engaging  in her introduction to The Trolly Song from Meet Me in St. Louis by Hugh Martin and Ralph Blane. Her approach to  Real Live Girl by Cy Coleman and Carolyn Leigh which was nice to hear, because she spoke it singingly and without effort.  On a few occasions, she managed to combine a more spoken approach with singing effectively, as in her rendition of Kander and Ebb’s Cabaret, made particularly poignant by the presence of the original M.C., Joel Grey, in the audience.

But when she tries to actually sing, we encounter a voice with lots of tensions a good teacher should address, and  a cavernous vibrato that hammers at her sense of pitch. It makes her voice so heavy that it kills the tone in her lower range.Her rendition of Sondheim’s Pretty Women from Sweeney Todd tonelessly scraped the basement of her voice and lacked the lilting lift which the song demands. In her upper range, her voice gets very small and pinched when she tries to sing, with the vibrato issues on top of it. In those moments, she sounds like Bernadette Peters doing Katherine Hepburn. Neither sound is very pretty. It also limits her ability to have any subtlety of vocal expression from a musical perspective. That was especially true in her rendition of Another Hundred People from Company,which was relentlessly toneless.

Until she gets with a vocal coach who can teach her to use sustained speech and straighter tone when she wants more energy, she will likely continue to sing like a wobbling Kachina doll about to fall over. It’s not a sound that I could enjoy for a full hour, as much as I enjoyed her style, her acting, her presence, and her beauty.

Her musical director, Scott Cady, should have known better on a lot of fronts.  He obviously isn’t a vocal coach, and didn’t offer her any useful advice in this area. But he wasn’t a great accompanist, either. He was so focused on his own piano playing, to the point where I don’t recall him looking at her singing once during the show. If he’s going to accompany singers, he needs to learn to listen to them when they sing, and adjust himself accordingly. His playing was sloppy on several numbers, possibly because he was overplaying his arrangements so hard. You shouldn’t play Another Hundred People if you can’t play it cleanly, period. His playing of her encore song, Shiver Me Timbers by Tom Waits, was one of the few times he really seemed to know what pianissimo meant. Overall, his playing lacked dynamics, and was just plain too loud.

Also, as good an actress as Ms. Neuwirth is, everybody can use a little coaching and direction. Her rendition of The Bilbao Song was wonderful dramatically because it had been directed for her one woman show,  Here Lies Jenny, by fellow performer and frequent collaborator Roger Rees before he died. But her rendition of I Never Do Anything Twice, Steven Sondheim’s deliciously sexy and innuendo filled song from The Seven Percent Solution, was surprisingly pushed. I’ve never heard anyone else sing this song and totally fail to set up the double entrendre line, “I know that it’s…hard.” Of course, if Mr. Cady had not barreled through it when he played it, she might have figured that out for herself. It seems an outside director would help this show before she does it again.

Ms. Neuwirth did a lot of lovely arm and hip wiggling. But I couldn’t help thinking, after seeing Tony Yazbeck’s show here on the heels of his starring appearance in On The Town, that she could have really danced more, too.  She ended her regular show with Kander and Ebb’s And the World Goes ‘Round,  giving a Fosse-esque tip of an imaginary hat… which she probably should have been wearing…to her audience.