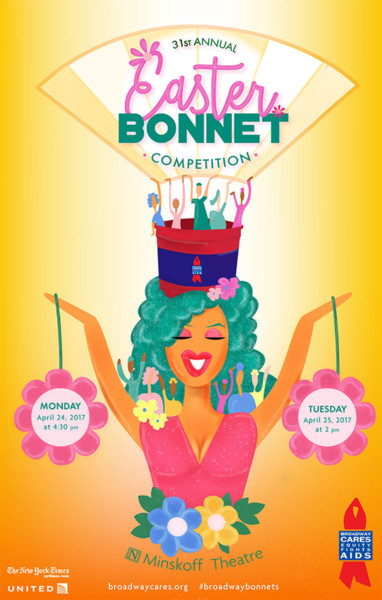 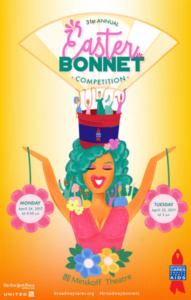 The 31st annual Easter Bonnet Competition is slated for today and tomorrow at the Minskoff Theatre. The 2017 edition will include guest appearances from Denée Benton and Lucas Steele from Natasha, Pierre & the Great Comet of 1812; Barrett Doss and Andy Karl from Groundhog Day; Bongi Duma and Tshidi Manye from The Lion King; Gideon Glick and Sas Goldberg from Significant Other; and Rachel Bay Jones and Ben Platt from Dear Evan Hansen. Nick Kroll and John Mulaney will reprise their curmudgeonly characters of Gil Faizon and George St. Geegland from this fall’s smash hit Oh, Hello on Broadway.

More than 150 Broadway actors and dancers will come together to celebrate the theatre community’s fundraising efforts at Broadway’s Minskoff Theatre, home to Disney’s The Lion King.

At Tuesday’s performance, Gavin Creel, Bette Midler and David Hyde Pierce will present the awards for best presentation and best bonnet design and to the top fundraisers from the preceding six weeks. Christine Ebersole and Patti LuPone will introduce the competition’s.

Shows scheduled to perform original numbers include Avenue Q; A Bronx Tale The Musical; Cats; Chicago; Dear Evan Hansen; Kinky Boots; The Lion King; Natasha, Pierre & the Great Comet of 1812; Sunset Boulevardand Wicked. A unique parade of bonnets will honor The Price, Sunday in the Park with George and Waitress. The cast of The Play That Goes Wrong will make a special appearance. And there will be numbers honoring national touring productions and Broadway Cares’ fundraising volunteers, affectionately known as the Bucket Brigade. The Lion King‘s L. Steven Taylor will perform Easter Bonnet Competition‘s stirring anthem, “Help Is on the Way.” Performers and shows subject to change.

A limited number of tickets, starting at at $30, are still available. Get tickets.