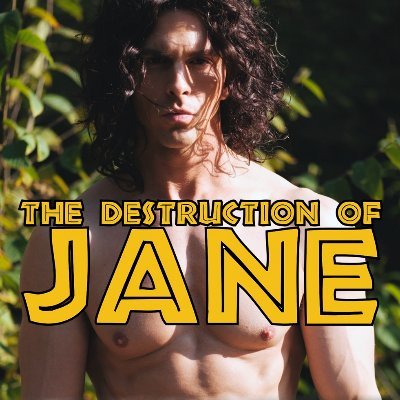 This “Filthy, Hilarious and Lewd” 7-part miniseries just simply sounds like a whole lotta fun. Written and starring Paul Pecorino, The Destruction of Jane is set to debut April 29th on their YouTube, co-starring the impressive Rob Eco, with special cameo appearances by the always fabulously fun Mario Cantone and the incomparable Randy Rainbow. How could we not want to tune in for this jungle adventure. It is sure to make Edgar Rice Burroughs spin in his grave this COVID pandemic spring.

In the new seven-part miniseries, titled The Destruction of Jane, Pecorino was most deliciously inspired by the infamous film Tarzan the Ape Man (click on the title for the film’s trailer), starring Bo Derek and Miles O’Keefe (for which Derek was proudly named Worst Actress at the 1981 Razzie Awards, and it’s pretty obvious from the trailer exactly why). This new YouTube miniseries is an unauthorized parody of that impressive King of the Jungle, told from the point of view of Miss Jane Parker. It will begin weekly installments on Thursday, April 29 at 8 a.m. on their YouTube channel: The Destruction of Jane. A new episode will premiere on every subsequent Thursday with the final entry being a short film summing up the series.

The Destruction of Jane stars Paul Pecorino and Rob Eco as Jane and Tarzan respectively, and features special cameo appearances by Mario Cantone and Randy Rainbow. Written by Paul Pecorino and directed by Drue Pennella, The Destruction of Jane was filmed on location in the Catskills and New York City. Set in the current COVID-19 pandemic, this outrageous comedy follows Jane to the African Jungle where she meets and falls in love with the spectacular specimen we all know as the legendary Tarzan. Rob Eco certainly fits the bill.https://www.youtube.com/embed/go4w-9Rdyr0?version=3&rel=1&showsearch=0&showinfo=1&iv_load_policy=1&fs=1&hl=en&autohide=2&wmode=transparent

The 1981 Tarzan film became a massive financial hit due to its dizzyingly unintentional bad taste, and screenwriter Paul Pecorino has set out to push these offensively vulgar boundaries even further. “Tarzan remains one of the most successful fictional characters to this day and is a cultural icon. Many people don’t know this, but Tarzan was born out of the Spanish flu pandemic to lighten the mood and bring some joy back to the population. I thought what better time than now to do the same,” states Pecorino.

Paul Pecorino has starred Off-Broadway in Devil Boys from Beyond (New World Stages), The Crumple Zone (Rattlestick) and as Sylvia St. Croix in Ruthless! He starred as Frank ‘N’ Furter in the international tour of The Rocky Horror Show. His popularity in recreating the Sweetest of Transvestites throughout Europe led him to record a tribute Solo CD entitled Perfectly Frank in collaboration with author Richard O’Brien. Model/actor Rob Eco scored the role of Tarzan in The Destruction of Jane largely from his viral and now iconic photographs, which first appeared in The Advocate under the headline “Artist Spotlight: Tarzan in New York.” Rob is also an accomplished physical trainer and competitive bodybuilder.

Mario Cantone achieved fame as the brutally honest, bitchy Anthony Marantino on “Sex and the City.” His numerous Broadway credits include Love! Valour! Compassion!, Assassins, The Tempest, and Laugh Whore. Randy Rainbow, if I need to tell anyone, is a comedian, singer and international YouTube sensation, where he spoofs interviews with famous figures and parodies musical numbers with a political focus (and once with Patti LuPone).

Check it out. I know I will be wanting to swing on that vine (especially with almost any Tarzan), while giving a good jungle yell in approval.