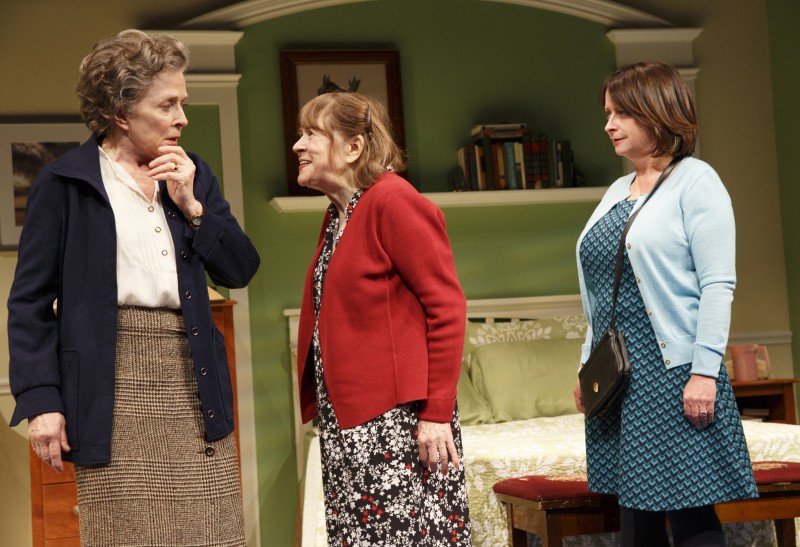 David Lindsay-Abaire Ripcord has Marylouise Burke and Holland Taylor waging war. One for a better view ad the other to be left alone. David Hyde Pierce directs this madcap comedy that is sure to have you laughing as well as being appalled at what steps we will take to get what we want.

In the zany Burke, the dry witted Taylor has met her match. As the hilarious line hit you like a speeding train the subject of growing old and losing your joie de vivre is looming. Domestic violence, drug addiction, familial estrangements are peppered with death.

Abby Binder (Ms. Taylor) and Marilyn Dunne (Ms. Burke), share a room at the Bristol Place assisted living facility. Marilyn doesn’t mind nothing makes her mad. Abby however wants to be alone. When Abby tells Marilyn nothing scares her the bet is on for each to get what they want. As the battle of wills each pushes the others hidden buttons. Rachel Dratch and Daoud Heidami are Marilyn’s daughter and son-in-law and partners in crime who help Marilyn get her one uppance. Nate Miller is the tortured health aide who tries to be there. Glenn Fitzgerald is the son who may or may not have it all together.

This cast is a riot and I adored Ms. Burke. I would have loved Ms. Taylor’s mike a little louder as it was hard to hear her wonderful delivery. Pierce directs this like a fabulous sitcom. The sets by Alexander Dodge were perfectly fitting. Mr. Lindsay-Abaire’s script had me truly enjoying this production. It’s witty, heartfelt and one of best nights of theatre for 2015.