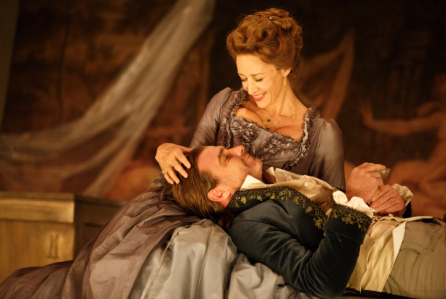 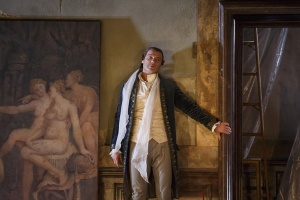 When I first saw Les Liaisons Dangereuses, I wanted Vicomte de Valmont (Liev Schreiber) to seduce me. I knew he was a rack, much along the lines of a young Donald Trump but Alan Rickman had the skill and voice to pull it off and I fell in love with Mr Rickman right then and there. 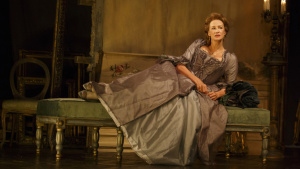 Les Liaisons Dangereuses was a novel by Choderlos de Laclos, published in 1782. In 1987 Christopher Hampton turned it into a seductive, alluring award nominated and winning play. In 1988 Glenn Close, Michelle Pfeiffer and John Malkovich went on to be nominated and win Oscars for their version “Dangerous Liaisons.” In 1989 Colin Firth and  Annette Bening enticed in Milos Forman’s version, Valmont. At the Booth Theatre Janet McTeer and Liev Schreiber have no chemistry, no seething wit or malice and are terribly miscast. This should be like a match between Hillary Clinton and Donald Trump when they were young and in their prime.  They are two rivals and ex-lovers) who use seduction as a weapon to humiliate and degrade others, all the while enjoying their cruel games and boasting about their manipulative talents. Here it is just words, words, words. 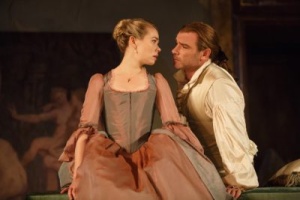 Liev Schreiber has no layering and when he seduces and falls for chaste, beautiful and deeply religious married woman, Madame de Tourvel (Birgitte Hjort Sorensen) we feel nothing. This is the moment when the rouge breaks through his hardened exterior and actually has a heart.  Valmont then turns on himself not to lose a bet and loses everything. There should a mired of emotions shaping out through this man and yet there is none.

“I was born to dominate your sex,” states the Marquise de Merteuil, played by Janet McTeer. The Marquise uses her beauty to manipulates men. When her lover leaves her to marry a 15-year-old  innocent virgin Cecile Volanges (Elena Kampouris), the Marquise is out for revenge. She enlists Valmont to seduce the girl before the wedding. Valmont, has his eyes set on Madame de Tourvel and refuses. The Marquis offers a night in bed so Valmont agrees. Cécile in the meantime has her heart set on Chevalier Danceny, her young music tutor (Raffi Barsoumian). The Marquise and Valmont pretend to help the lovers in order to gain their trust, but end up using them for their own purposes. In the end nobody wins and everybody has been manipulated just for the fun of it.

For three hours Josie Rorke fails to bring the play to life. I blame this dull uneventful stagnate production. Ms McTeer is neither sexy, powerful, or cruel enough. She is like a tall cool glass of water who the posing Schreiber does not connect an ounce with. This time the Donmar Warehouse fails.

What succeeds here is the costumes and set by Tom Scutt and the lighting by Mark Henderon.

In this election time there is plenty to pull from to make Les Liaisons Dangereuses crackle and fizz, but there is more chemistry between Hillary and Trump than in this production.