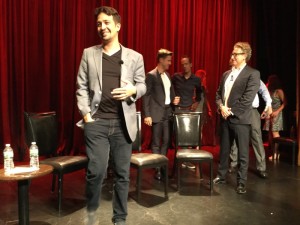 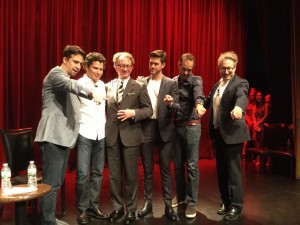 This was part of the Emmy bid for wins. This is the second part of the talks. If you missed part 1 click here. 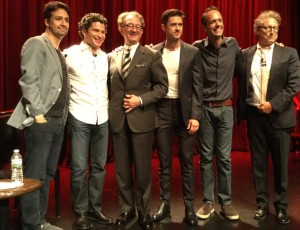 Several easter eggs from the original film were used.

Recognize the punch bowl at the school dance? If so, you either have a great eye for partyware or you remember its use in the original Grease film.

Each of David Korins’ 21 sets only contained 3 basic colors.

Creatives toyed with the idea of having a real drag race or filming toy cars during the racing scene. Both ideas were scrapped in favor of the lighting design used for the scene.

William Ivey Long said that if there was a musical about his life, the main song would be “I Am Changing” from Dreamgirls.

The cast rehearsed for a total of 52 days.

Fox’s Grease: Live stared Tveit, Julianne Hough and Vanessa Hudgens, first aired Jan. 31 as a live TV musical. Manuel-Miranda declared himself a fan of the production when he enthusiastically live-tweeted the entire broadcast.

The live production is nominated for a total of 10 Emmy’s this year, including outstanding directing for a variety special and outstanding casting for a limited series, movie or special.
Related ItemsAaron TveitAlex RudzinskiBernard TesleyEdison BallroomGrease LiveLin-Manuel MirandaNewThomas KailWilliam Ivey Long
Broadway