Saturday Night Live had Lin-Manuel Miranda hosting this week and the ratings went up. Miranda has become a smash since his Broadway musical Hamilton. His opening monologue joked about how most people watching SNL in middle America probably have no idea who he is and if they didn’t before last night, they do now. Miranda to a Trump photograph sang “Never gon’ be president now,” sung by Alexander Hamilton’s enemies in the wake of a damaging sex scandal. Miranda’s monologue quickly spilled out into the audience and hallway, and included writer and creator Lorne Michaels about how difficult it still is to procure Hamilton tickets.

Here are the highlights of Lin’s night: 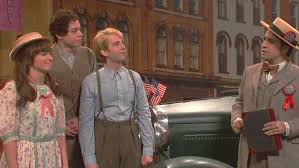 Turning the Wells Fargo fraud scandal into a parody of The Music Man. Miranda played the consummate traveling salesman, except this time he was selling unwitting townspeople fake bank accounts rather than musical instruments.

In a hilarious skit, which essentially parodied every inspirational teacher movie in Hollywood, Miranda tried to his best to connect with the class, but they saw right through his tired methods.

“What up, fam,” he says as soon as he walks in the door, before introducing himself as Dale Sweeze. “You can call me Dale, you can call me Sweeze, but let’s take the Mister out of the picture.”

While trying to convince the class that Shakespeare was the greatest rapper alive.  “Yeah dude, we know. You’re not the first well-meaning sub to try and reach us through hip-hop.”

Last night was a win win for SNL, Broadway and Lin Manuel Miranda.