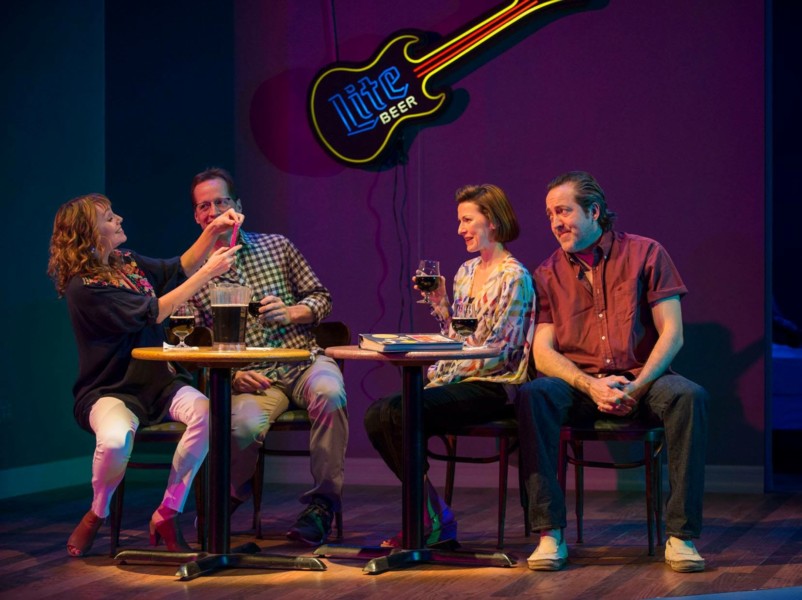 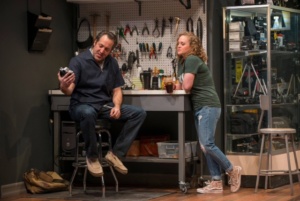 Divorced and starting over at age 50, Steppenwolf’s latest comedy, Linda Vista, written by Pulitzer Prize and Tony Award-winning playwright and ensemble member Tracy Letts (his fifth world premiere production at Steppenwolf) has a little something for everybody. Sharp banter, topical political witticisms, and enough flawed characters to fill a psychiatrists couch and an array of mid-sized theater audience seats for decades. Directed by Dexter Bullard, Vista works in circles far beyond just the ever rotating stage design of Todd Rosenthal and his revolving set. Repeating the same intrinsic mistakes without learning much, the protagonist, Wheeler, continued to wear his ever present condescension like a medal of valor. It is clear he strongly felt he was and is the smartest guy in every room. What was not so clear to him, his rapidly inching into the undesirable role of cranky old man. Moving to the sunny San Diego’s Linda Vista apartment complex was a superficial attempt to temporarily ban the sad sack attitude while contemplating his next step. 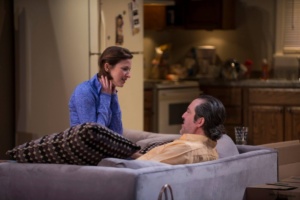 This show was all about Dick Wheeler (Ian Barford) and his existential midlife crises. Recently divorced and under-employed, working as a camera repairman in a small strip mall shop, the former photographer for the Chicago Sun Times is a man with no shame. This flawed hero quipped “I let myself down. Welcome to planet Earth.” The relocation to the new residence theoretically opened new opportunities for dating and romance. To help nudge Wheeler along in that direction, best friends from college, Paul (Tim Hopper) and Margaret (Sally Murphy) played matchmaker, determining  life coach, Jules (Cora Vander Broek) a plucky type, could be just what Wheeler needed to jumpstart his routine. After a monologue discussing how he loathes karaoke, they all met for a drink at the local, you guessed it, karaoke bar. Despite his modern day Archie Bunker grumpiness, Jules became quickly smitten with Wheeler, exclaiming her love for him within a month of dating. Next, enter neighbor Minnie (Kahyun Kim) a Vietnamese-American younger woman, currently in the middle of her own relationship calamity. After a brief meeting at a bar, and in an act of total desperation, Minnie became Wheeler’s new roommate. It wasn’t long before both woman end up sharing Wheeler’s bed and young Minnie became pregnant. Stifled by Wheeler’s newfound enthusiasm and hopes for a chance of some warped version of second-fatherhood, Wheeler found himself alone, yet again. 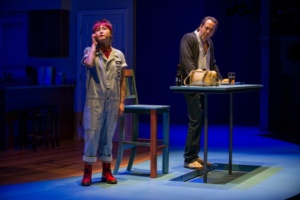 The third woman in Wheeler’s crosshairs was his droll co-worker Anita (Caroline Neff) blonde and ambitionless, these two “clicked” while discussing photography at the nearby mall’s food court . This after a particularly heated exchange with Michael (Troy West) the graphically misogynistic owner of the camera repair shop. It is no spoiler to report Wheeler doesn’t end up with any of this trio of ladies. Does he deserve a happy ending after committing so many repeated mistakes and rejecting all of the inevitable consequences? This is a  Steppenwolf play we are talking about, so of course not. The language is crass, vulgar and solidly heterosexual. Wheeler’s failure at forming substantial relationships with any woman is at the very heart of the material and we, as an audience, wouldn’t want it any other way. While it may appear on the surface the women in this production of Linda Vista are disposable, it is Wheeler himself who was the easiest to discard by the show’s conclusion. His wife didn’t want him and he has no relationship with his child beyond shared contempt. His career(s) have passed him by. He is now just existing, not flourishing at anything, including trying to be the best version of himself.

Edgy, smart, clever and yet purposely uncomfortable and awkward, Linda Vista is quintessential Tracy Letts and Steppenwolf. Some may draw comparisons between the Wheeler character and Letts himself, but I don’t know the man well enough to draw a similar conclusion. Being such a talented writer, I am confident Letts is much more prolific in the self-examination department than his fictional counterpart. Pointedly reflective, Linda Vista is a merger of loneliness, intimacy, white privilege, sexism, and second chances. Some deserved, some not. As we were leaving the production, my friend with whom I attended the play, shared with me she had both dated and been married to men like Wheeler in the past. This exchange instantly explained to me her reluctance to ever dip her toe back into the dating pool. What was so charming in art would be utterly exhausting to experience in life.  Linda Vista is best a shared comedic experience on stage, where you can then leave the sad sack that is Wheeler behind, discarded with the disposable wine glasses and candy wrappers.

Steppenwolf’s Linda Vista is now playing through May 28, 2017