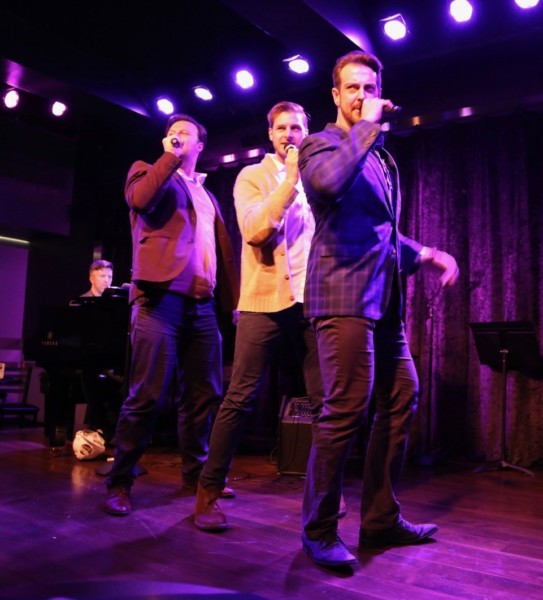 Line Up for Susie Mosher at Birdland Theater

Line Up for Susie Mosher at Birdland Theater

If you’re a Japanese tourist coming to Broadway, go see King Kong. Really. You came a long way. Check out the big monkey puppet. It’s cool. But then, dude-san, as well as all the rest of you out there, check out some real, flesh and blood ,New York performing talent. This town is full of performers who are the real six hundred pound gorillas of local entertainment.

When those talented people aren’t performing in the big venues, they often stretch their performing legs in small cabaret venues around the city like the new Birdland Theater, where a new, bi-weekly variety show, The Line Up with Susie Mosher, played on Tuesday night. The Birdland Theater, in the lower level of the Birdland Jazz Club on 44thStreet, is a classy, comfy, welcome addition to our cabaret scene. 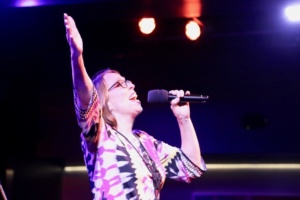 If you haven’t experienced Susie Mosher, you haven’t seen New York, or at least, its most neurotically entertaining performer. Ms. Mosher is a frequent guest  upstairs in Birdland at Jim Caruso’s Cast Party on Monday nights, and this event is sort of a spin off from that, with the same free wheeling sense of fun. This uber-talented, utterly wacko (at least on stage), proudly lesbian, singing comedienne is herself a Broadway veteran, now appearing in the long running, off Broadway topical revue, Newsical.  Her cabaret specialty is a stream of consciousness, improvised song that captures her observations of the world around her with manic, self-deprecating wit.  As she admitted candidly, singing at the top of her voice, “I’ll give myself nodules tonight.  I’m not dead, and I’ll over-sing. That’s who I am!” You go, girlfriend. 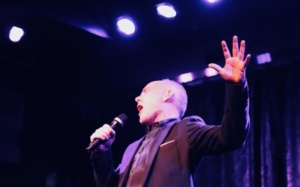 She was accompanied in her musical raving by the talented Brad Simmons on the keys.  He created music to follow her unfiltered flow as if joined to her by the Vulcan mind probe. Mr. Simmons also did a fine job of accompanying most of the evening’s musical guests.

Another Broadway veteran, Michael Winther, performed “Take a Look at Me” from John Mercurio’s “Diva Diaries.”  It’s a kind of “I Am What I Am” confessional from a gay man in which the singer confesses he wishes he could have been like his macho dad.  But, as the son tells the father, you get what you get.  Winther is a classy, confident and dynamic performer who focused on the power of the music rather than what could have been self-pity in his performance. 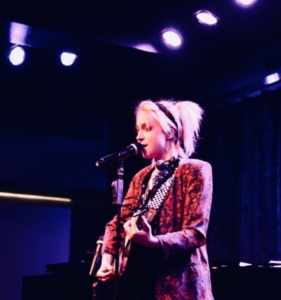 From the Birdland staff, Allie Sciulla accompanied herself on guitar with her original song “Trophy Wife.”  Ms. Sciulla is more a satirist-comedienne than a singer or instrumentalist.  Her rather loosely structured musical diatribe raged jealously against those women of privilege, then confessed that she wouldn’t mind also to “find a rich husband, say fuck it, and just stay home.” Most of the audience, male or female, seemed to agree. 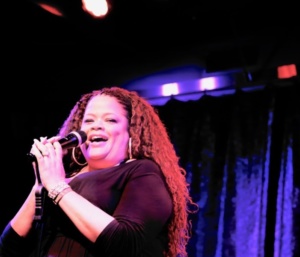 Birdland regular and ten time MAC award winner Natalie Douglas, a powerful and versatile singer, performed “Table 32”, a song about a waitress reluctantly serving what looks like an inappropriately  May-December couple, who turn out to be a young woman just reunited with her birth father.  Natalie confided that she was also adopted, and there wasn’t a dry eye as she told the story. 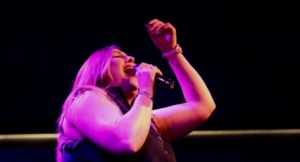 Carly Sakolove, currently winning accolades as Ethyl Merman in The Book of Merman off Broadway,sang “I just Want to Be a Star,” alternating her own fine voice with the stable of other top female performers she imitates so well, and who kept popping out of her unexpectedly.   She told me that she, Christina Bianco and Christine Pedi, the other top female singer impressionists in town, are friends who have performed together.  A flock of divas.  That I want to see! 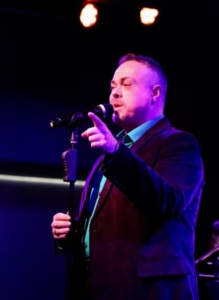 Sean Bernardi brought in a thoughtful tune, “I Don’t Believe in Heros Anymore” from Three Guys Naked From the Waist Down. The lyrics tell of fallen heros in our troubled times, and offer only a glimmer of hope for happiness in the end.  I can’t say I’d ever want to hear this song again, but it was interesting once. 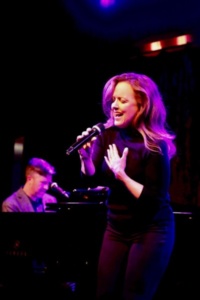 Tony Award winner and audience favorite, Alice Ripley, a long time friend of Ms. Mosher’s, wearing her new “beatnick black” sweater and pants, dropped in to share her soulful version of the 60’s hit, “Tell It Like It Is.”  You can see her entire cabaret show this weekend at 54 Below. 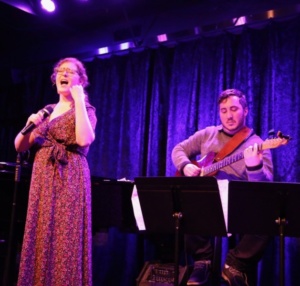 But the highlight of the evening was a talented new face (to me), Kira Goidel. This young jazz songbird has a fine, floating soprano voice and easy style. Accompanied tastily on jazz guitar by Alex Frondelli, Ms. Goidel presented her own arrangement of “Home” from The Wiz,andmade it sound like another, even richer piece of music entirely.   Her performance was effortlessly beautiful.  She has her own show coming up on February 24 at Birdland, with her group called Ktet.  I urge you to get a ticket to it while you can. 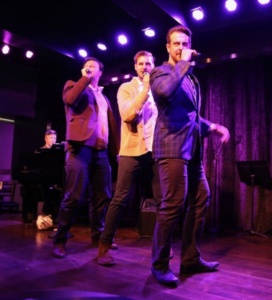 To close out the evening, Joe Hager, Kyle Hinds and Edward Miskie, three strapping tree trunks of hunky Broadway beefcake who call themselves Baritoned,  surprised us with a medley of show tunes meant for female singers.  As they explained, they felt that baritone leading men in Broadway shows often are given a narrower emotional range in which to sing than their female counterparts.  They  will return to the Birdland stage on March 19.

At only $25 plus a $10 minimum, The Line Up with Susie Mosher is a lot of entertainment bang for your buck in this neighborhood.   Check it out when it returns to the Birdland Theater on February 12.