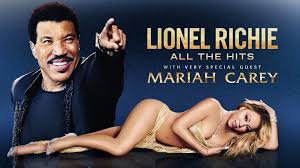 Lionel Richie and Mariah Carey Will Their Concert Be This Summer’s Biggest Hit or Flop?

Lionel Richie and Mariah Carey Will Their Concert Be This Summer’s Biggest Hit or Flop?

Singer/songwriter Lionel Richie and Mariah Carey will be performing in NYC at Madison Square Gardens August 19th. Richie got his start with the Commodores in the 1970s, before becoming one of the biggest solo artists of the ’80s with such hits such as “All Night Long” and “Hello.” He is currently in negotiations to fill one of two judges’ seats for ABC’s “American Idol” reboot. ABC secured Katy Perry as the first judge shortly after announcing the show’s reboot in May. Richie, 68, is currently on his “All the Hits Tour” with co-headliner Mariah Carey, who spent one season on the original series.

The concert is having trouble selling tickets. There are a lot of “Buy one, get one free”or $19 advertisements. Mariah has been on a downward spiral since New Years Eve. Her reality show and her  comeback single, I Don’t, with rapper YG, were both flops.

Also the concert has bee plagued with cancellations.

Suzanna BowlingJanuary 13, 2022
Read More
Scroll for more
Tap
The Stars Come Out For Rose: Opening Night of Michael Moore: The Terms of My Surrender
Calling All Writers and in This Case Performers: Part 1 BMCC Tribeca Performing Arts Center