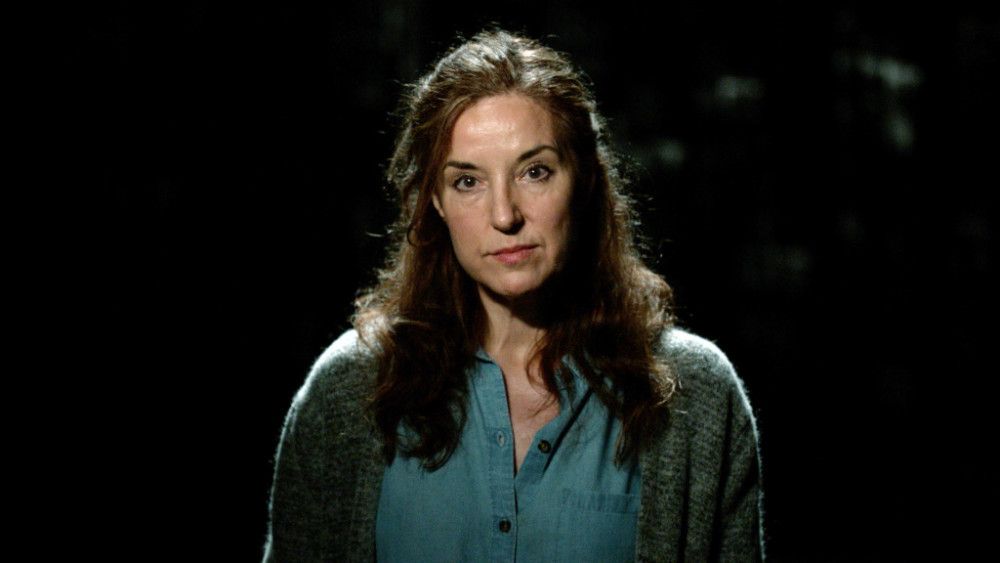 “Listen to The Sound Inside“, we are told, and that call and those same five words repeated over and over again resonate with a “hauntingly attractive” beauty. The tender desperate space inside is filled with a heady power and insight from the opening credits onwards, where everything feels different. As “certain as old trees“, the TheaterWorks Hartford finds their way to deliver this powerfully mysterious play by Adam Rapp with gusto, fortitude, and grace, streaming on demand April 11–30, 2021 to members and single ticket buyers through the company’s website. Rapp’s play engages, dangling the unique drama before us like a feast on fire. Directed with a strong sense of the tense aroma the play elicits by TheaterWorks Hartford’s Producing Artistic Director Rob Ruggiero and Pedro Bermudez, The Sound Inside finds its way to its poetic edge, delving into the complications of these two, without ever giving it all away.

The production tries with some success to utilize the limitations of this COVID time to expand and explore the boundaries of theatre by organizing and tasking Ruggiero, a theater maker, to work with Hartford filmmaker Bermudez to form a collaboration with hopes that some unique quality can be born from the mixing of processes. The team set out to film the live production for future streaming, with the communal desire of deepening the mystery of Rapp’s gripping and complicated play, with a strong intention of pushing through the structures of live performance and viewing the dynamic through the clear eyed lens of a camera. It’s a solid thesis and a “sound plan“, especially with a play filled to its dark edges with masked asides voiced and directly shared to the audience, mostly from a fascinating narrator who describes herself, quite wrongly, as “unremarkable“. The gamble doesn’t disappoint, although the overall outcome, while being “pretty enough to paint” never seems to rise to the high collaborative ideal, nor use all that the two mediums could do for and offer one another.

Premiering in 2018 at the Williamstown Theatre Festival, the initial production, directed by David Cromer and starred Mary-Louise Parker and Will Hochman, quickly forged its way to Broadway, opening at Studio 54 with the same cast and creative team officially on October 17, 2019. It eventually closed on January 12, 2020 a few months before Broadway went dark, with the production receiving six Tony Award nominations, including for Best Play and Best Actress in a Play for the well-deserving Parker. It was a wonder of composition and structure, seemingly filling the stage with these pools of light emerging out of the darkness. The magnificent Parker (“Angels in America“) in the lead role of Bella, basked in that hallowed spotlight, tearing into our connective tissue with intelligence and tenderness. Her performance and the play left deep and profound questions hanging in the air: “Is she writing her new novel, speaking it out loud to the tree gods for approval, or is she telling us her tale so we may understand or collude with her? Or is it something more obscure?” (as I wrote in my review of the Broadway production). The Broadway production was transcendent, mysterious, and powerful. Unfortunately, somewhere within this strongly focused virtual production, some of that abstract questioning never made its way out before us.

A master of those small intricate moments that can truly define a character, Rapp created a play that teases its action and purpose forward, without ever worrying about finding “the perfect thing to say.” The characters struggle and make mistakes, which The Sound Inside relishes in its angled perspectives. The play truly embraces the idea that the “readers only need a few detailed clues” to find their way in all that darkness, giving the cast ample legroom to stretch. The straight talking Maggie Bofill (Signature Theatre’s Between Riverside and Crazy) dynamically digs her way into the role made magnificent by Parker. She is, in some ways, more attuned to the role, authentically filling out the frame of Yale creative writing professor Bella Baird who comes face to face with her humanity. When life takes her down a familiar pathway, her distinct persona slams headfirst into her challenging, but brilliant student Christopher Dunn, played with a convincing sense of guarded purpose by Ephraim Birney (Studio Theatre’s Admissions). The Sound Inside opens with Bella addressing the audience directly with a brutal honesty that engages, bringing us into the unremarkable world she inhabits with ease, as well as enticing us with the familial history that will plague her moving forward. She walks us through and in to that moment when the brash talented student storms her office without the required appointment. The energy between the two is compelling and provoking. She is drawn to him, pulling him inside her bubble with a bravery that we can see even confuses her own sense of self. The tension is leading us one way, but the playwright has greater steak to fry, and the rush to the stunning conclusion reveals “new things with each reading“.

With a strong creative team that includes set designer Lawrence E. Moten III, costume designer Alejo Vietti, lighting designer Amith Chandrashaker, and composer Billy Bivona with sound recording & mixing by Massive Productions, The Sound Inside draws us in with its skillful storytelling. Ruggiero (TWH’s American Son) states, “it is, after all, a story about people who tell stories – and it held me with the unfolding and unconventional friendship between these two complex and guarded people.” Birney’s Christopher Dunn ensnares us through his choice of words inside his sound and fury, just as easily as he does with Bella, coaxing us to invest ourselves in his pointed storytelling process. It’s as intoxicating as a 12 year-old scotch, making us sit up and take notice, especially when she states, “and then he does that!” How could we not lean into all that? It’s a shame the collaborative possibilities are never fully realized with the film, especially with the abundance of possibilities those asides could have delivered out. As directed here, they fall flatter than they ever would on stage, as the medium of theatre encapsulates and embraces the technique without effort. Film asks for more, or at least something that individuates the compulsion. That sharp unique creation, like Parker did with the part on Broadway, is noticeably missing in this otherwise strongly performed and tasty feast.

Suzanna BowlingMay 3, 2021
Read More
Scroll for more
Tap
John Cullum’s An Accidental Star is Personable and Full Of Theatre History
What to Watch in The New Year: April 14