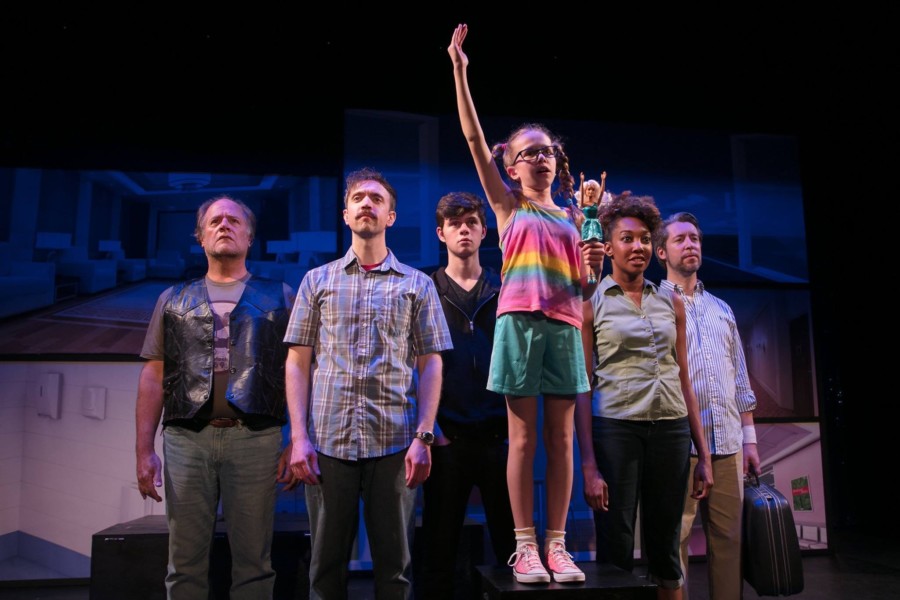 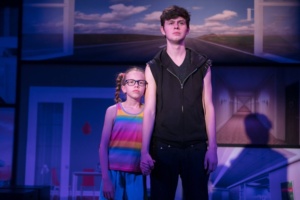 There is always a risk when adapting a well-known movie into a musical. Obviously, the advantage is the name recognition of the project to their perceived built-in audience. I would refer to Sara Bareilles’ hit, Waitress the Musical, currently playing on Broadway at the Brooks Atkinson Theatre, as a solid example of successfully transitioning a well-loved cult hit flick to the stage. Which now brings me to the regional premiere of the new musical Little Miss Sunshine, now playing at the Edge Theatre. Adapted from the 2006 Academy Award-winning film, this Sunshine sadly is blocked by the heavy clouds of the largely forgettable score written by William Finn and an insipid book by James Lapine. The delightfully offbeat charms of the characters that connected so well with the  film’s audience are lost in this rendition. Directed and choreographed by Maggie Portman and produced by Chicago Theatre Workshop, this low budget concept ran out of gas long before the curtain dropped after the overly-stretched climax. 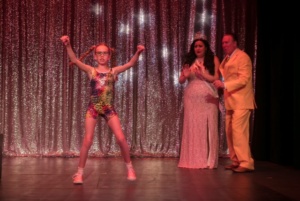 For those who have not seen the movie, the story of Sunshine revolves around the eccentric Hoover family. The main attraction here, and certainly the best piece of casting, is Sophie Kaegi as Olive. A scene stealing ham with a golden voice, this girl will be sought after long after this production closes. Her delightfully dorky Olive has won a children’s beauty pageant by a technicality. The crux, she now has just three days to make it to the next round of out of town competition with the hopes of being crowned the next Little Miss Sunshine. Joining her on the road trip are parents, Richard (Greg Foster) a flailing motivational speaker and Sheryl (Sharyon Culberson) his exasperated wife, her brother, Uncle Frank (George Keating) fresh out of the hospital after a failed suicide attempt, brother Dwayne (Kyle Klein II) a sullen teen who recently took a vow of silence and Grandpa (Ken Rubenstein) a saucy senior recently kicked out of Sunset Village retirement home for his sexual antics and drug habit. What a collection. Each family member spends the rest of the performance individually facing their personal demons through song played out over their cross country escapade. The addition of a trio of Mean Girls (Chayce Davis, Jersie Joniak and Tatum Pearlman) was a clever attempt to distinguish this from the film, although their taunts of Olive were uncomfortably close to crossing the edge. Robert Groth and Jennifer Thusing’s minimalist set, the cast sitting on movable boxes to simulate their position in the family van, didn’t detract from the cast’s performances.

The biggest payoff came toward the end as the family arrived at the actual Little Miss Sunshine pageant. It was clear most of Martha Shuford’s costume design budget was well spent here. Bit player Jennifer Ledesma nailed her cameo as the former Miss California, serenading the crowd with an overtly toothy grin while performing the original ditty “Little Miss Sunshine.” Sweet Olive nailed her pageant solo, hastily and frenetically working the entire stage, adorned in a rainbow hued leotard, singing “Shake Your Badonkadonk.” This number was the show’s most outrageous and righteous laugh. Had the show ended at that point, Sunshine could have gone out with the bang of a  lightning strike, but instead it drizzled on for another ten minutes.  At one point, the mother desperately sang  “Something Better Better Happen,” a tune which, ironically enough, summed  up the entire show. Sadly Little Miss Sunshine played like a piece of experimental theater, nowhere near a cohesive narrative or completely satisfying showcase.