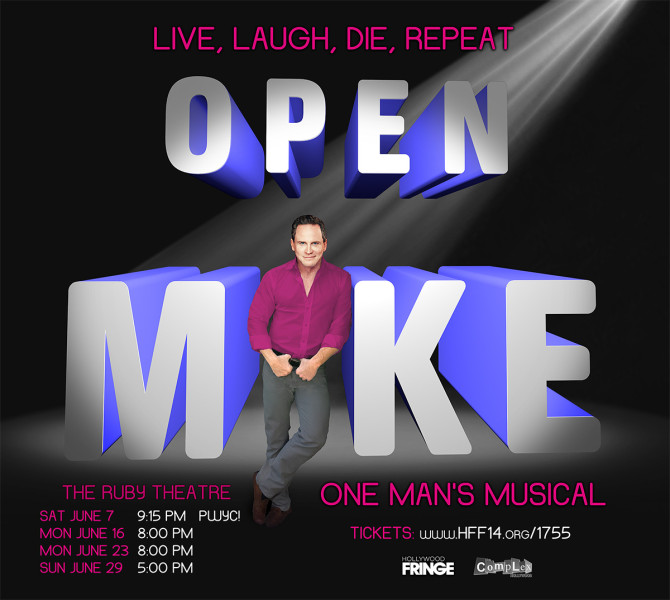 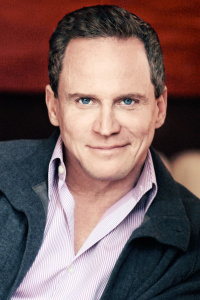 Michael Cline’s one-man musical “OPEN MIKE” directed by Randy Brenner, is not only moving and hilarious, but also heartbreaking and hopeful. This true tale of survival and resilience is premiering at the Hollywood Fringe Festival June 7-29, 2014. 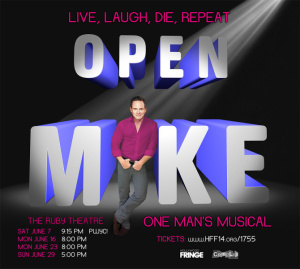 I first saw a workshop of OPEN MIKE two years ago and was impressed by its’ poignancy, but in his latest preview Mike Cline (that’s Cline with a “C”, not Kline with a “K” as he parodies to the tune of “Liza with a Z”) has cut away the fat making this show one not to be missed. His sharp comedic timing deftly carries us through heavier topics such as HIV and a severely schizophrenic mother, but quickly moves on to witty tales of plastic surgery, Daddy complexes and being a Chippendale’s dancer.

The 75 minute show starts with Mike in a bright, white light, negotiating with God to extend his adult life as he realizes that he can’t leave now, he has too much to do! He then transitions into a hilarious “Take me OUT of the Ballgame” song about being forced to play baseball as a young boy when all he really wanted to do was to be a Sears Winnie the Pooh clothing model.

Mike’s dramatic chops are at their best during a dining room scene where he morphs between playing his elegant but bi-polar grandmother, stubborn Texan grandfather, live-in maid Williemay (who essentially raised him) and mentally ill mother. Showing how he often escaped his family through imaginative play, Mike conveys schizophrenia from a child’s view- plunging into the hell that was his mother’s reality with a naïve innocence that just wants to understand why. When she has a rare moment of clarity asking, “Michael, will it ever stop?” his struggle to help her is heart wrenching.

Just when all seems lost in young Mike’s world, he parodies how his two Uber- Christian Aunts took it upon themselves to indoctrinate him into the church and convert him into a teenage missionary proselytizing to poor, starving, Mexican children with “the more flies and mucous around their eyes the better”.

After surviving almost being molested by his older cousin during a game of strip Monopoly, Mike talks about finally coming of age and embracing being gay. Clever lyrics in act one’s exuberant patter finale “I’m Leaving Texas”, shares how he was finally pushed out of the Lone Star State after he was busted for public lewdness for “dancing with a guy” in his first ever visit to a gay bar.

OPEN MIKE begins its’ second act in New York with a witty montageof doing anything to survive until he “makes it” on Broadway, including being a singing Dr Pepper can and a tap dancing, Mary Kay pink, powder puff cheerleader. In the hilarious, raucous song, “A Little Lift”, he laments being “a fresh new face in L.A.- at forty” and running to the plastic surgeon every time he gets cut from a film or TV gig.

Not shying away from the topic of AIDS, Mike does a loving homage to his best friend, the well-known Broadway arranger/conductor, James Raitt, (Bonnie Raitt’s cousin), who passed away from the disease in 1994.

After acquiring guardianship of his grandparents at thirty-four, Mike then unexpectedly dies, which brings us back to the afore-mentioned white light. In his magnificent expression of truth, Michael Cline conveys his life’s mantra- to keep moving is essential. His message is clear: if he can thrive despite his past, so can you.

Michael Cline is an award-winning actor, having performed on Broadway (in the original cast of Me and My Girl), Off-Off-Broadway (To Whom It May Concern) and in tours of Jesus Christ Superstar, 42nd Street and Singing in the Rain among others. On TV and film, he’s been seen in “Dreamgirls”, “Legally Blonde”, “Sabrina” and “Sex and the City”. www.miketcline.com