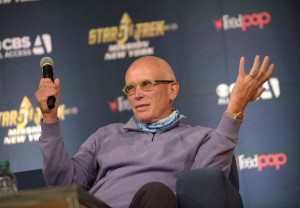 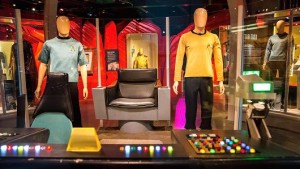 Appearances by former cast-members, William Shatner and LeVar Burton, among others, Star Trek merchandise galore and three days of panels discussing everything a “Trekkie” fan could want are drawing 1,000s of fans. 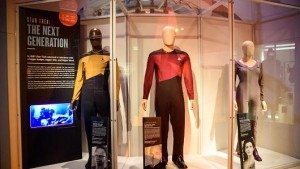 The Star Trek franchise started on Sept. 8, 1966, with the premiere of Star Trek: The Original Series. Television viewers fell in love with William Shatner as Capt. James Kirk and the late-Leonard Nimoy as Dr. Spock. Phrases like “Space: the final frontier” and “Beam me up Scotty” became infamous. Now “It’s the 50th anniversary of the original series, with six different [TV] series, 13 movies to boot. Over 15,000 to 30,000 Star Trek fans are expected to attend the Jacob K. Javits Convention Center.

Fans can enter the  “gaming zones” and play various video games based on the franchise, including the massive online role-playing game Start Trek Online, which will soon be available on Microsoft’s Xbox One and Sony’s Playstation 4. There’s also a tour of recreated set pieces from Star Trek: The Original Series, featuring the bridge and the transporter console from the original U.S.S. Enterprise.You can even sign up for a Star Trek cruise set to sail in 2017. Want your own Personal Starfleet uniforms or a Tribble, here us where to get them. Be the first to preview the Smithsonian Channel’s upcoming documentary “Building Star Trek.” Real life NASA scientists and astronauts are on hand to talk about the real-life technology that enables space travel. 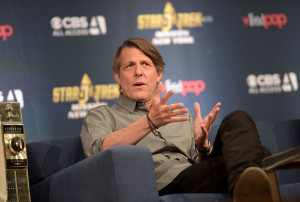 Yesterday LeVar Burton, Jonathan Frakes, Gates McFadden, Michael Dorn, and Marina Sirtis addressed a packed house at the Star Trek: The Next Generation panel with Adam Nimoy sitting in the front row watching. When reminiscing about their days on TNG, Dorn talked about Jonathan Frakes bouncing off the walls, that he went right through one, Sirtis stated that there was one director who after two episodes in the first season said he was never coming back because they were “too rowdy.” Dorn talked about the differences between the mood on the TNG set and the Deep Space 9 set. Frakes talked about going to his first convention in Syracuse in the 80s.

In addition to the conventions in New York and Las Vegas, the celebration of 50 years of Star Trek has already featured a 100-city concert tour with a live symphony orchestra and a touring art exhibit that launched at San Diego’s Comic-Con earlier this year. The  Starfleet Academy Experience at New York’s Intrepid Museum, and the Smithsonian Institution’s restoration of the original shooting model of the U.S.S. Enterprise are also happening.

Shatner and Kate Mulgrew appear today so you still have time to fork over $65 and attend from 10-5.