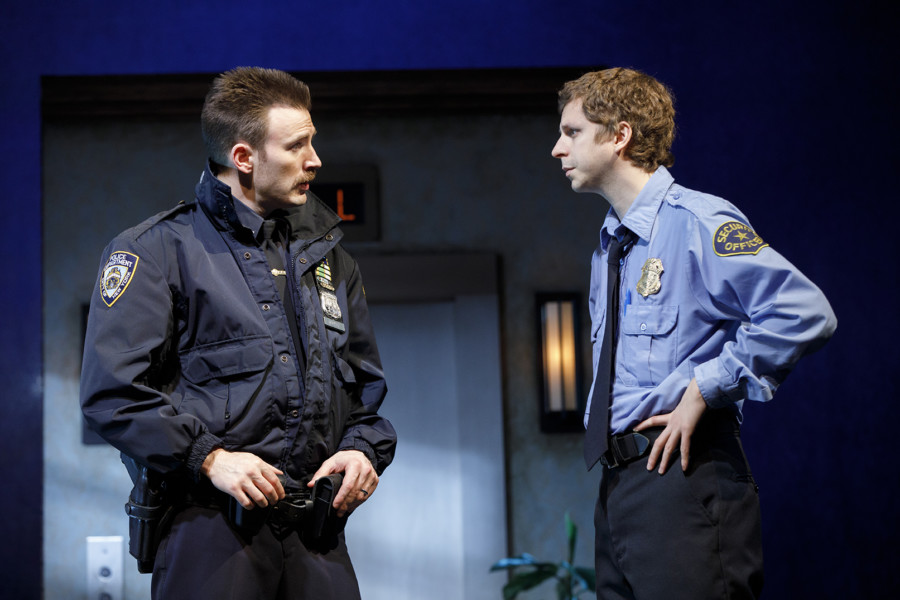 Lobby Hero: Where Lying and Betrayal are the Norm

Lobby Hero: Where Lying and Betrayal are the Norm 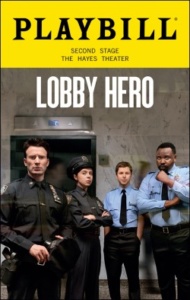 Dawn (to Jeff): “…but it’s still your responsibility to tell the truth and obey the law. You just can’t make it up when there’s some part of it that you don’t like….” 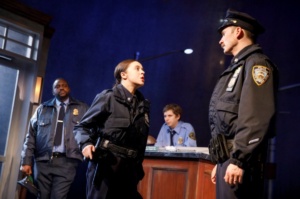 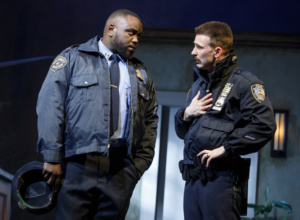 Lobby Hero takes on loyalty, betrayal, ambition, sexual harassment, police brutality, and ethics. In this piece, nobody succeeds in escaping the pitfalls and traps. This modern morality play takes place during 24 hours in a Manhattan high-rise apartment lobby. 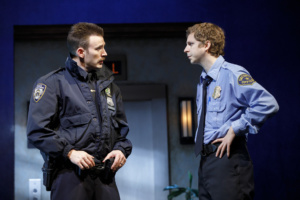 Jeff (Michael Cera, “Arrested Development”) is a night security guard in an apartment building. In reality, he’s a doorman but takes pride in the other title. This luckless young security guard is trying to get his life together after being thrown out of the Navy for smoking pot. Incapable of keeping his mouth shut or holding a job, he longs to move out of the room he rents from his brother. Jeff also longs for a friendship with his moral, “by-the-books” supervisor, William (Brian Tyree Henry “Atlanta”). William keeps giving Jeff self-help books to motivate him but hasn’t a clue as to why. When William confides in Jeff that his brother has been arrested for the murder of a young nurse, Jeff asks “is she white?” We never learn that answer. 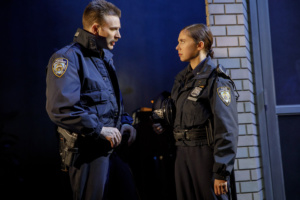 In the meantime, beat cop Bill (Chris Evans, “Captain America”) and his rookie partner Dawn (Bel Powley, “A Royal Night Out”) enter the lobby. Jeff is infatuated with Dawn, but she’s crushing on her macho, narcissistic partner. They’ve slept together once, but he’s married and having a series of booty calls with women in the apartment building.

As friendships form, they are quickly betrayed as the secrets that are told in confidence last less than a minute.

The cast is at the top of their game. Michael Cera is irresistible and believable as he over shares. When he commits the ultimate betrayal then lies to keep his job, we see the calculating shrewdness that lies beneath the innocent act. Brian Tyree Henry’s performance runs the full range of emotions and we see an honorable man wrestling with his strict code of ethics. I just wish Mr. Henry had better diction, as it was hard sometimes to understand what he was saying. Bel Powley is endearing, but her Dawn sometimes seems more like a “Law and Order” character. TV and film star Chris Evans impressed in his Broadway debut. As the manipulative cop who uses his charm and good looks to hide his true nature, he is the perfect portrayal of a psychopath.

Trip Cullman keeps his ensemble on track. He builds the emotional tension, allowing us to become entangled in just how deep the betrayals here are and how deep the lies flow. David Rockwell’s revolving set gears us to see this show in different perspectives.

Lobby Hero is mostly banter, hitting on issues that are striking nerves such as #Metoo and police brutality. Ethics have always been a dilemma and doing the right thing takes strength of character. I found some of the betrayals too quick and unrealistic, but maybe that is where we are now.