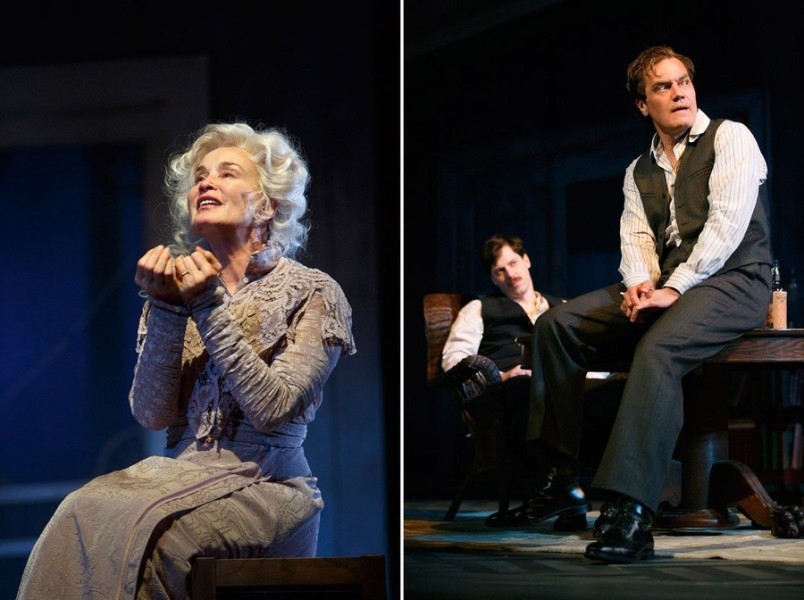 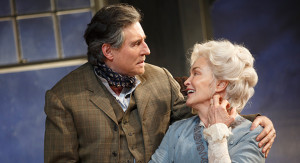 The Roundabout Theatre Company’s wonderfully revival of Eugene O’Neill’s, Long Day’s Journey into Night breathes new life into this 1956 look at dysfunctional family living or should I say surviving. Seeing this show is a commitment, as you will spend almost 4 hours at the American Airlines Theater, 227 W. 42nd Street. Standing the test of time Jessica Lange, Gabriel Byrne and Michael Shannon give mesmerizing performances that were recently honored with Tony nods, as well they should be. Out of the shadows the Tyrone Family emerges haunted, broken and in need of redemption. 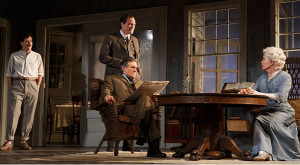 I’m not blaming you, dear. How can you help it? How can any one of us forget? That’s what makes it so hard – for all of us. We can’t forget.

The time is 1812 and we are on the shores of a Connecticut in a house that has never been a home. The patriarch James (Byrne) is an actor, who sold his soul for a play that made money but sucked the life out of him. He is an alcoholic, a penny pincher with a temper that is easily satisfied. He loves his wife Mary (Lange) who is a drug fiend, partly due to her nerves and a painful birth, where the doctor gave her morphine. She has just come home from a long line of treatment centers, but they have not helped. Their sons Jamie and Edmund in a sense never stood a chance at having a happy life. Jamie (Shannon), also an actor is jealous, vengeful and an alcoholic to escape the fact his mother blames him for everything. Edmund (John Gallagher Jr.) is suffering from consumption (TB) and tires to escape life. As we spend one very long day into its night we see this family try to fight its way out of the past, as they relive the hurts, deal with their demons and hurt each other to the core of their souls. The Tyrone’s love each other but it is not enough.

Yes, forget! Forget everything and face nothing! It’s a convenient philosophy if you’ve no ambition in life except to –

The play is a semi-autobiographical story about O’Neill’s life, so through his words we love them, feel sorry for them, pity them and understand them wanting to help but that time has long past.

Jonathan Kent treats this play like it is a haunting of the past that has already happened and we are seeing the trails of hope that have yet to have left this earth. He brings out a truth from each of his actors and because of this Byrne, Lange, Shannon and Gallagher Jr. are a real family bonded together as if by super glue. These performances are layered and so heart wrenching it is painful to watch. Even Colby Minifie as the maid has her moments of truth.

I have been privileged to see the great Colleen Dewhurst and Katherine Hepburn in the role and Jessica Lange gives as good as these giants before her. Her Mary goes into to decline before our eyes as we watch her disintegrate into a ghost of herself. We feel her pain, her loss, her weakness, her cruelty and most importantly her humanity.

There is a reason why O’Neil is considered one of our greatest playwrights and why Long Day’s Journey into Night has survived and is still as relevant today as it was when it was written. Thankfully Kent understood that nothing had to be added, his signature did not need to be stamped and he let the work and his actors stand on their own.