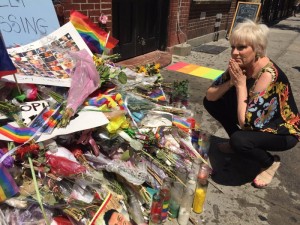 Being the daughter of an beloved gay icon buys you a lot of applause and respect. This was never more evident than when Lorna Luft took to the stage at Feinstein’s/54 Below. As part of Gay Pride Week she paid honor to the June 12th mass shooting at the Pulse nightclub in Orlando, Florida. Earlier this week, Luft visited the Stone wall Inn, where a memorial to the 49 victims of the Orlando.To mark the 47th year of her mother Judy Garland’s passing on her 47th birthday audiences members were rewarded with a tearful surprise, a first time live performance of “Over the Rainbow,” the song made famous by her mother, Judy Garland. Luft told the audience that she had never performed the song “not because it was too hard for me emotionally, but because I always felt you can’t improve on perfection.” 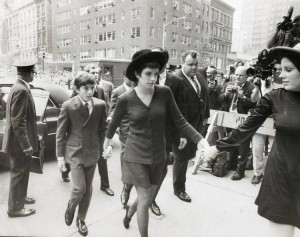 Garland is culturally linked to the 1969 Stonewall riots, which are considered the symbolic start of the LGBT rights movement. The riots took place in the early morning hours of June 28, less than 24 hours after Garland’s funeral. “My mother would have loved the fact that people fought back, because she hated bigotry, and she hated injustice,” Luft told the crowd. “And don’t ask how much she would’ve loved that rainbow flag!”Luft performed songs from her sister husband and her mother’s protege Peter Allen, 70’s dance king Paul Jabara songs from the White Christmas which she has and is touring with and the iconic “Over the Rainbow.”

Colin Freeman, her musical director, conductor, arranger and husband, lead a terrific 3 piece ensemble where Freeman played the keys, Josh Priest (Drums) and Jim Donica (Bass). It is hard to criticize such an icon, but Mr Freeman’s arrangements do not help out Ms. Luft who is strong on the emotional connection and the acting. but her belt is rough and brassy with a wide, vibrato. Singing softly is not her forte. Her energy and heart, however do make up for the inconsistent vocals.

Lorna represents to many the sad loss of her mother. She gives her audience a connection to what has been lost, taken away and given back in her daughter. That in itself makes Ms. Luft worth seeing.