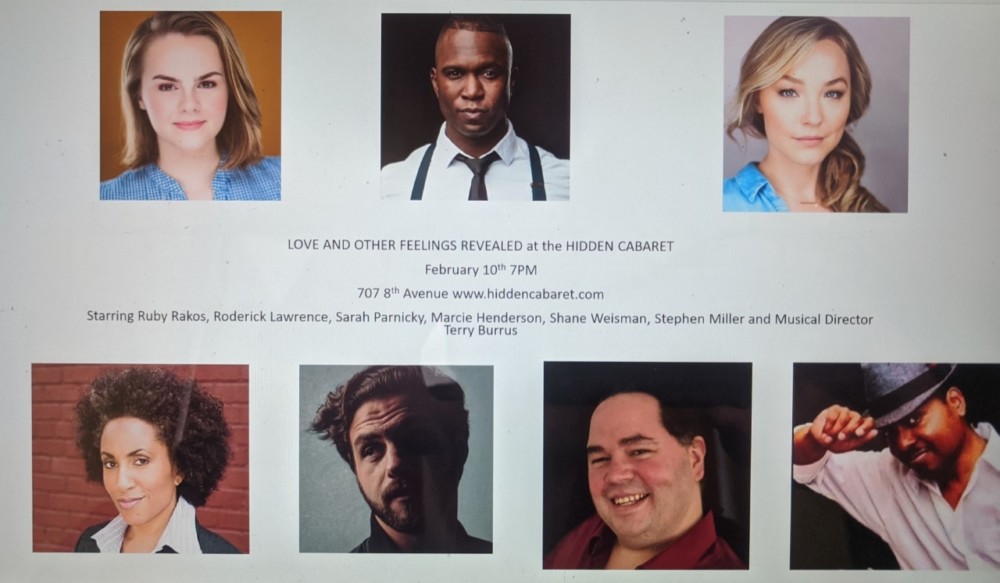 The Hidden Cabaret, the new cabaret series at the Secret Room at 707 8th Avenue, will unveil its latest production on February 10th at 7PM. Love and Other Feelings Revealed at Hidden Cabaret, is subtitled Valentine’s is One Day a Year – What about the 364? The host of the show Craig Horsley, states that, despite the show’s timing on February 10th, “this is not a Valentine’s Day show. This is a show about feelings: love, anger, lust and happiness and will be relatable to all, whether you are single or a couple.”

Terry Burrus is the musical director. Terry is an internationally known pianist and musical director who has worked with Mariah, Diana, Aretha, Lena, Michael, and Bjork as well as multiple other performers who are not known only by their first name. His career has spanned all forms of entertainment from Off Broadway at an early age in “Young, Gifted and Broke” by Weldon Irvine to the iconic film “Fame” to TV with Letterman, Johnny Carson and Arsenio Hall as well as eight solo albums. Terry plays solo concerts around the world and is the music director for the world famous “New York Times Symphony Orchestra” as well as the “Washington Post Symphony Orchestra” in the classical pop scene.

Selected songs will range in genre and time period from Broadway to rock and from 1936 to 2015 each relevant to telling the story of our emotions and relationships.

Hidden Cabaret is a production of Redhorse Theatrical. Go to www.hiddencabaret.com for tickets and information on other programmed events. Love and Other Feelings Revealed at Hidden Cabaret begins at 7PM but doors open at 6PM for dining and beverages at 707 8th Avenue.