Nora Davis thanks the crowd.

On December 27, 2016 magic was made and money was raised at the famed Metropolitan Room, with a glittering cabaret event benefiting the Human Rights Council and Planned Parenthood called, “Love Trumps Hate”. 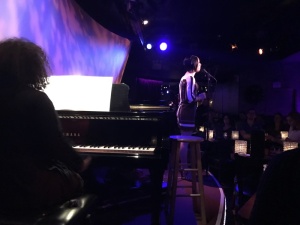 Hosted by chic, drag queen Shirley U Jest and accompanied beautifully by Tracey Star on piano, the varied line-up that included Broadway babies, jazz legends, musicians and comedians did not disappoint. Comps to future shows at the Metropolitan Room and floral arrangements by co-producer Joseph Macchia were raffled off throughout the night. 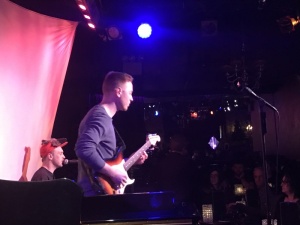 Wickedly talented/bound for Broadway, Nora Davis (who also co-produced) did an adorable duet of “Suddenly Seymour” from Little Shop of Horrors with crooner Carlos Knauth.  The powerhouse duo was last seen together performing their original show, “A Marvelous Moment.” 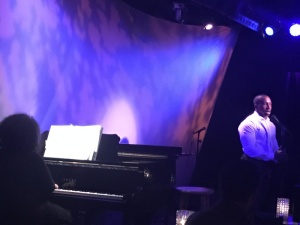 Jazz legend Laurie Krauss was a pro, allowing her pianist to shine as she massaged “You Must Believe in Spring” ala Lainie Kazan. Miguel Edson (Amazing Grace) sang a velvety rendition of Godspell.  Lexi Dorsett Sharp gave a Jessica Rabbit-esque version of “Come Rain or Come Shine” and talented Clifford Ray Berry lamented how “She Used to Be Mine”.

Comedienne Rachel Joan killed with her stand up among a night full of ballads.  She took down the house with confident banter and off-color jokes, not afraid to push the envelope.

John Zisa was pure sex on the piano.  This season 4 semi-finalist of American Idol, truly moved the audience with his passionate message of hope and to “Keep Loving Each Other”.

Band of Brothers duo- the witty Tom Gamblin and Joshua Bennett (“The Vibrato”) did a touching duet to “I Know Him So Well”.   Winding out the night (and the year), Gamblin’s final solo left the audience with the prolific message to stay in the present to avoid heartache.