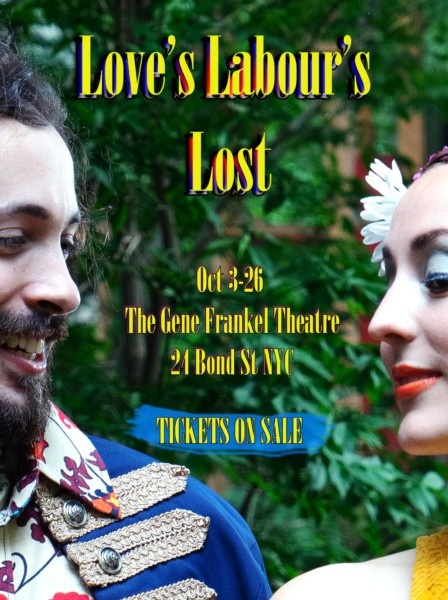 You always know when a cast is non-equity and not well trained. They have no control over their physicality, cadence or nuances. This much and more is true at TGW Acting Studio’s production of a musicalized version of Shakespeare’s Love’s Labour’s Lost now playing at The Gene Frankel Theatre, 24 Bond Arts Center.

Director and adapter Thomas G. Waites, has set this to the music of the 60’s and the 50th anniversary of Woodstock. Great idea if the songs matched what was going on in the play and the actors could act.

The story is basically the same, a King (Joshua Lazarus) and his three noble companions, the Lords Berowne (Steven Smith), Dumaine (Luis Guillen), and Longaville (Daniel Kornegay), take an oath not to give in to the company of women. The King declares that no woman should come within a mile of the court. Don Adriano de Armado (Brandon Hynum), a Spaniard visiting the court, tells the King of a tryst between Jaquenetta (Annie Sizova) and Costard (Jonathan Mastrojohn), as he wants Jaquenetta. However, seconds before he was involved with his male servant (Josh Rubenstein) and it seemed that he swung the other way. Is this the reason they put this play in the Woodstock time zone? if you weren’t confused from the beginning, you would be by now.

When the Princess of France (Grace Langstaff) and her ladies arrive, wishing to speak to the King about seeking the cession of the Aquitaine, he makes them camp outside the court due to the decree. As the King falls in love with the Princess, so do the lords with the ladies (Julie Spina and Chandler Robyn). Berowne gives Costard a letter to deliver to the lady Rosaline (Melissa Molerio), which Costard switches with Don Armado’s letter that was meant for Jaquenetta.

Jaquenetta and Costard enter with Berowne’s letter and accuse him of treason. Berowne confesses to breaking the oath, explaining that the only study worthy of mankind is that of love, and he and the other men collectively decide to relinquish their vows. The men then dress to court the ladies in disguise and the ladies trick the men by disguising themselves as each other. Impressed by the ladies’ wit, the men apologize.

In the meantime The Doors, Jackson Browne, Jesse Colin Young, and more are performed live by this cast who play guitars rather well, sing presentably, but then go off key. Like the text it doesn’t seem that anyone here truly knows why or what they are singing or performing.

The PR agent made this sound great and though they did state “Presented by The TGW Acting Studio with the generous financial support of The Jeff Hunter Charitable Trust, I thought this was a professional company. Veteran agent Jeff Hunter, who passed away in early 2018, represented and discovered Kevin Kline, Raul Julia and Mandy Patinkin who definitely knew how to do Shakespeare.

I found the direction and adaptation poorly conceived. The acting sub-par. The choreography by Marlene Wallace, not based in any period and sloppy.

Nothing in this production seemed thought out. When you invite a critic in Manhattan to review, you have to be able to keep up with the big boys. In the Drama Desk, Off, Off-Off and Broadway are all considered in the same vein. Sadly this just seemed amateurish.

Suzanna BowlingJune 18, 2022
Read More
Scroll for more
Tap
I Can’t See – A Must See
Slave Play has Broadway Processing Up a Grand Entanglement