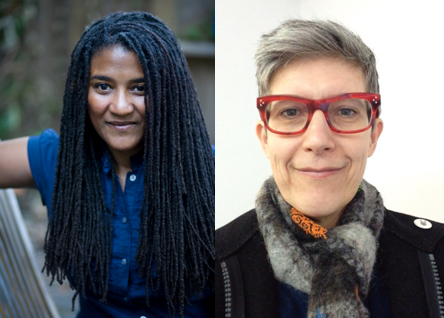 Lynn Nottage is a playwright and screenwriter; she is the first (and remains the only) woman to have won the Pulitzer Prize for Drama twice. Her plays have been produced widely in the United States and throughout the world. The revival of her play Fabulation, or the Re-education of Undine finishes its run at the Signature Theatre on the 13th. Her play By the Way, Meet Vera Stark (Lilly Award) will take over at the Signature on the 29th. Her most recent play, Mlima’s Tale, premiered at The Public Theater in May 2018. In the spring of 2017, Sweat (Pulitzer Prize, Obie Award, Susan Smith Blackburn Prize, Tony Nomination, Drama Desk Nomination) moved to Broadway after a sold-out run at The Public Theater.

Ms. Nottage will be interviewed by Elisabeth Vincentelli, who covers the arts for publications such as The New York Times, The New Yorker, Newsday, and The Hollywood Reporter. She was chief theatre critic of The New Post and Time Out New York’s arts and entertainment editor.

Suzanna BowlingFebruary 21, 2021
Read More
Scroll for more
Tap
The National Theatre and the American Associates of the National Theatre Celebrate Network at The Rainbow Room Tonight
The Stars Come Out For Rose Opening Night at Choir Boy