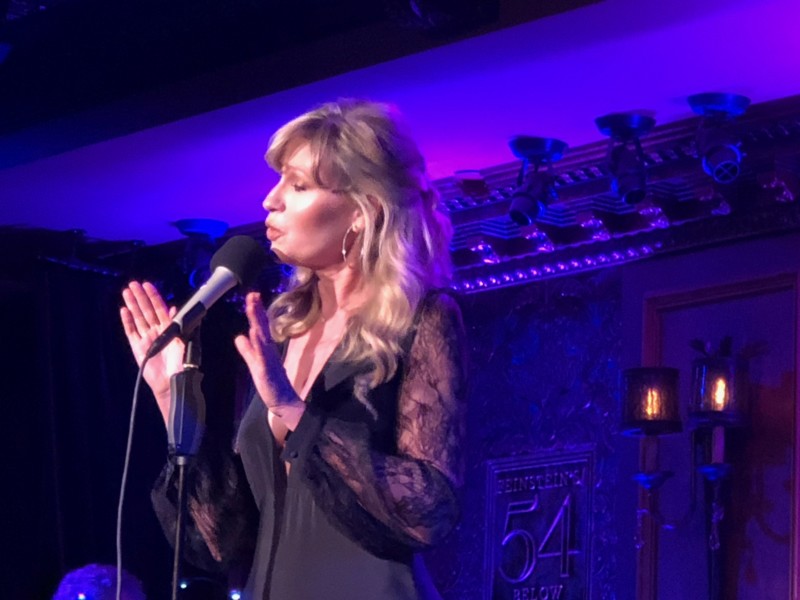 Ms. Mason’s 30 year career earned her a Lucille Lortel nomination for her role in the acclaimed Public Theater production Girl From The North Country, headed to Broadway. Standing 5′ 10″, Luba is lithe, with long blonde hair, and was looking stunningly sexy in a lace dress. Married to actor/singer Ruben Blades for 21 years, Luba’s life has not always been as perfect as it seems.

Together with pianist & music director the legendary Billy Stritch! Luba sang a Broadway centric set list that describes her life in song. With just an easel Luba leads us on a journey that was captivating. Starting with Barry Mann & Cynthia Weil, Jerry Leiber & Mike Stoller’s “On Broadway”, we learned how she changed her name from Lubica Anna Gregusova to Kim Freshwater to Lubitza Gregus, and finally to Luba Mason. She did not change her name to Luba Blades, because she was finally comfortable in her own skin.

With Irving Berlin’s “I Love a Piano” we are led through her days with Lee Theodore and The American Dance Machine and the NYU Tisch School of the Arts, as well as auditions and shows she did not get.

After seeing Dreamgirls, Luba wanted to be in that show, instead she got cast in Tommy Tune’s The Will Rogers Follies. Finding her perfect audition song Harvey Schmidt and Tom Jones “Raunchy” from 110 In The Shade Luba showed off her 3-octave range. This song got her working for Des McAnuff in How To Succeed in Business Without Really Trying. Recreating her role, Frank Loesser’s “Love From A Heart Of Gold” showed off Ms. Mason’s comedic chops.

Falling in love for the wrong man steamed from an abusive childhood. Unfortunately that led to marrying an abusive man, as she emotionally recounted the pain in Harry Warren and Al Dubin’s “I Only Have Eyes For You”.

Paul Simon’s The Capeman, brough her not only a strength to leave that marriage but also a new love with Blades. Richard Carpenter, John Bettis, and Albert Hammond’s “I Need To Be In Love” expressed that transition.

Replacing Linda Eder in Frank Wildhorn’s Jekyll & Hyde, brought the achingly “Someone Like You” to life.

Playing Velma Kelly had Ms. Mason recreating “All That Jazz” from the hit musical Chicago. In the show she worked with her long time idol Ann Reinking.

Ending the concert for me was the biggest surprise. With Luba at the helm, David Yazbek’s “Haled’s Song About Love” from The Band’s Visit made me love it and admire the lyrical poetry.

Together with Billy Stritch, who accompanied Luba vocally on some of the numbers, made the night musical brilliant. There was an emotional connection to each and every lyric.

In Girl From The North Country, Luba plays drums. For her encore she gave us a preview of what’s to come. Luba’s cast mates were there to cheer her on including Mare Winningham.

Luba is also currently finishing a new album Triangle, produced by Renato Neto (who was the Keyboardist for Prince for over 15 years). The album will be released in 2020 and features James Genus on Bass (the Saturday Night Live band, has toured with Herbie Hancock, Branford Marsalis & Bill Evans), and internationally renowned Joe Locke on Vibraphone (who has toured with Rod Stewart).

You can also catch Luba on Broadway February 7th in Girl From The North Country.

The Phantom of The Opera Comes to Broadway At The Pierre
‘Tis THE Season….Rock Center Tree is Lit!!!