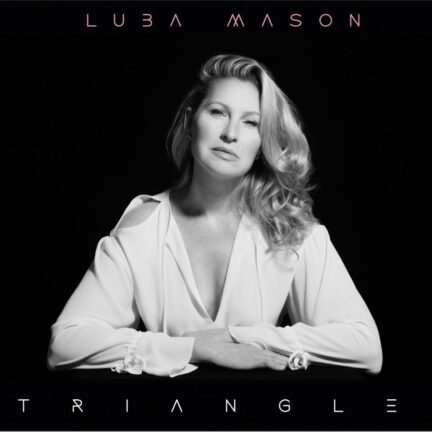 With eight Broadway shows under her belt and a two-time Lucille Lortel and Drama Desk-nominated performer, Luba Mason’s stunning renditions of songs also makes her a recording artist to collect and listen to. She has just released her 4th new solo album Triangle. Using just voice, Joe Locke on vibraphone, and James Genus on bass and tuba, this music, jumps out with a new take. A prime example is “Toxicity” by System of a Down, that hauntingly weaves its way into every cell of your body.

Recorded at the legendary Power Station before a small, invited audience, this CD is produced by longtime Prince collaborator, Renato Neto, who Mason termed the phrase Mixtura, to describe her sound. Mason signature style brings to life pop, Broadway, classical, jazz, standards and world music. These electric paired down renditions are unique without the traditional piano arrangements. Mason’s voice is crystal clear and this CD embraces an International flare within these 10 tracks. She embraces her Broadway roots with David Yazbeck’s “Haled’s Song About Love,” from  The Band’s Visit. Mason’s version gives a new appreciation for this song, with its Brazilian vibe.

Joe Locke’s solo’s ring out with a vibrance, as does James Genus, who also plays tuba for Sxip Shirey’s playful ”Bach, Stevie Wonder, and Janette Monae”. Mason’s voice slides effortlessly over the notes as she brings the lyrics to a clarity.

Returning to her heritage Mason sings “Cersne”(Cherries) a duet with Locke in Solvack and English. This is a coming-of-age folk song. Emotionality it is in deep contrast to the swinging “In Walked Bud.” Thelonious Monk’s song brings beat to a thrilling new level.

“Inolvidable” sung in Spanish offers Mason’s Latino fanbase a number to call their own with its tender embrace of language. Frank Loesser/Jimmy McHugh standard “Say It” brings simplicity of phrasing. Closing out the album is Paul Simon’s “50 Ways to Leave Your Lover,” a high spirited closing to a wonderful thought out concert.

With plenty of swing and syncopations Triangle, is a must CD to download and own. In a time when we need to get back to simplicity, laid back joy that embraces life, Luba Mason gives us music that is clear, guide on how to achieve those goals.

Triangle on Blue Canoe Records is available on Amazon, iTunes, Apple Music and all streaming platforms.

Luba Mason’s Triangle in Concert will be held on 11/20 9pm. This concert was filmed at an intimate gathering of invited friends, family, and fans at Manhattan’s renowned Power Station studio at Berklee NYC. This event is sponsored by The Power Station at Berklee NYC, Good Idea Slovakia, Morell Wine Company, and Girl From The North Country on Broadway. There are also specials for the concert and the album.

Suzanna BowlingSeptember 19, 2022
Read More
Scroll for more
Tap
The Glorious Corner
What To Watch November 9th To Take Away The Blues