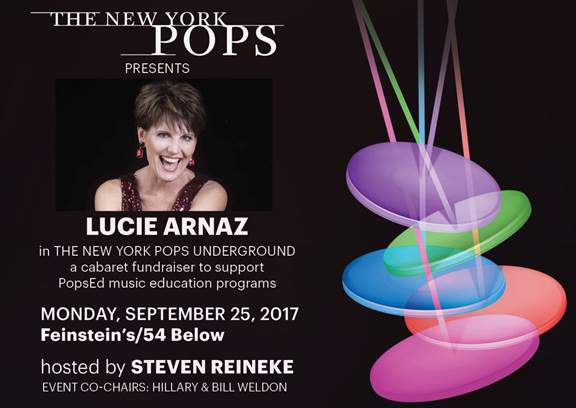 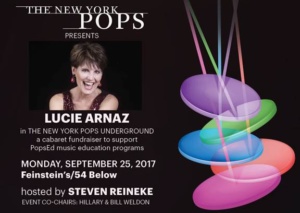 On September 25, 2017, Lucie Arnaz and The New York Pops will return to Feinstein’s/54 Below to raise funds for the PopsEd Teaching Artists. Music, dinner with wine pairings and a performance by Ms. Arnaz and her band make this an event to make time for. The event is hosted by Music Director Steven Reineke and event co-chairs Hillary and Bill Weldon.

“The New York Pops annual cabaret evening is one of our most intimate and exciting events each year,” says Reineke. This is an event that is certainly not to be missed!” All proceeds will support The New York Pops’ PopsEd music programs, which reach more than 5,000 New York City students each year.

Lucie Arnaz has had an extremely diversified career spanning over fifty years in show business. She has starred on the New York Broadway stage in They’re Playing Our Song (Theatre World, LA Drama Critics and Outer Critics Circle Awards), Lost in Yonkers, Dirty Rotten Scoundrels, and Pippin; in First National companies of Seesaw, Whose Life Is It Anyway?, Social Security, My One and Only (Sarah Siddons Award), and Pippin; and in regional theatres in Wonderful Town, Master Class, Cabaret, The Guardsman, Annie Get Your Gun, I Do! I Do!, Educating Rita, Vanities, Li’l Abner, Bye Bye Birdie, Once Upon a Mattress, Mack and Mabel; in the London premiere of The Witches of Eastwick; and at Florida’s Coconut Grove Playhouse in Once Removed, A Picasso, Ann and Debbie, and Sonia Flew. She has appeared on television in The Lucie Arnaz Show, Abduction of Innocence, Sons and Daughters, The Black Dahlia, The Mating Season, Who Gets the Friends?, Washington Mistress, Death Cream, and HERE’S LUCY; on the big screen in The Jazz Singer (Golden Globe Nomination), Down to You, Second Thoughts, Billy Jack Goes to Washington, Wild, and The Pack. Lucie has performed on The Academy Awards, at The White House, and internationally in concert. She was Executive Producer of Lucy & Desi: A Home Movie (Emmy winner, 1993) and the I Love Lucy 50th Anniversary Special (Emmy nominee, 2001). She produced two CD-ROMs, and two albums (Just in Time and Latin Roots). She also travels the lecture circuit (Surviving Success). Lucie served on the Board of Directors of The American Theatre Wing for fifteen years. With her brother, Desi, she manages Desilu, too, LLC. With her husband, actor-writer Laurence Luckinbill, she manages five children. Lucie invites you to visit her online at www.luciearnaz.com.

The New York Pops is the largest independent pops orchestra in the United States, and the only professional symphonic orchestra in New York City specializing in popular music. Under the leadership of dynamic Music Director and Conductor  Steven Reineke, The New York Pops continues to re-imagine orchestral pops music. The orchestra performs an annual subscription series and birthday gala at Carnegie Hall and a summer series at Forest Hills Stadium in Queens, NY. The New York Pops is dedicated to lifelong learning, and collaborates with public schools, community organizations, children’s hospitals and senior centers throughout the five boroughs of New York City. PopsEd allows thousands of New Yorkers of all ages and backgrounds to participate in fully customizable music programs that blend traditional education with pure fun. Follow The New York Pops on Facebook (facebook.com/newyorkpops), Instagram (@thenewyorkpops), and Twitter (@newyorkpops).

Steven Reineke is the Music Director of The New York Pops at Carnegie Hall, Principal Pops Conductor of the National Symphony Orchestra at The John F Kennedy Center for the Performing Arts, and Principal Pops Conductor of the Houston Symphony and Toronto Symphony Orchestra. Mr. Reineke is a frequent guest conductor with The Philadelphia Orchestra and has been on the podium with the Boston Pops, The Cleveland Orchestra and the Chicago Symphony Orchestra at Ravinia. His extensive North American conducting appearances include Seattle, Edmonton and Pittsburgh. As the creator of more than one hundred orchestral arrangements for the Cincinnati Pops Orchestra and the composer of symphonic and wind ensemble compositions, Mr. Reineke’s work has been performed worldwide.

The New York Pops is a not-for-profit corporation supported solely through the generosity of individual donations, institutional grants, and concert income. Dates, artists, and programs are subject to change.

Stephen SorokoffJune 23, 2022
Read More
Scroll for more
Tap
Feinstein’s/54 Below Will Present The Timely Rock Musical The Fix: In Concert
5 Tips for Hiring the Best Limousine Service for Your Prom or Bachelorette Party