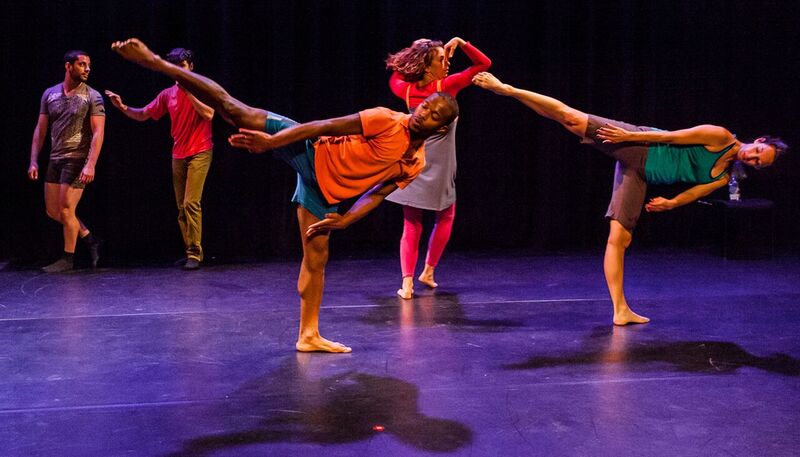 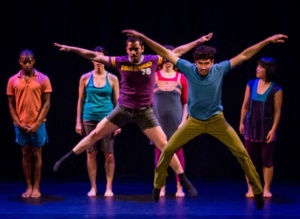 To borrow a song title from The Beatles, I get a feeling the troupe of Lucky/Plush Productions truly are “Happy Just To Dance For You”. Their unique approach to modern dance, blending powerful and precise movements, strength and grace with a unique comedic flair makes them a standout in the Windy City modern dance landscape. Housed on the beautiful, if not larger than it needed to be main stage at the Harris Theater in Millennium Park, Tab Show is the latest production of their successful 18th season. Created and directed by Julia Rhoads, Tab Show blended cleverly choreographed modern dance movements with their signature comic overtones. The Chicago based dance troupe also often jettisons traditional gender roles and norms in their works. The women lift the men just as much as the men lift the women. Powerful equality shines throughout their showcases. 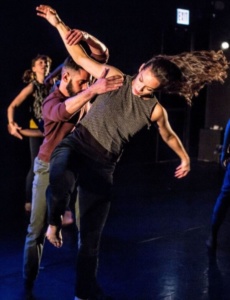 The team of nine dancers, featuring Kara Brody, Michael Rodriguez Cintra, Ethan Kirschbaum, Elizabeth Luse, Jacinda Ratcliffe, Rodolfo Sanchez Sarracino, Enid Smith, Aaron Raheim White and Meghann Wilkinson, crafted their own soundtrack of snaps, whispered conversation snippets, humming and riffing, altering tempos with their both bodies and whispered tones. Sampling popular music “ear-worms” lifting familiar segments of music including The Sound of Music’s “Do-Re-Mi” and Saturday Night Fever’s “Staying Alive”, it was impossible not to smile throughout the show. One of the dancers quipped during a particularly strenuous combination of singing and dancing “I don’t know how Beyoncé does it”. Exactly, Sasha Fierce doesn’t mess around, and neither does this troupe. The moves may appear utterly spontaneous, but they are indeed meticulously crafted. Lucky Plush Productions artistic director, Julia Rhodes, seamlessly subbed in for ailing Meghann Wilkinson on the opening night performance I attended. 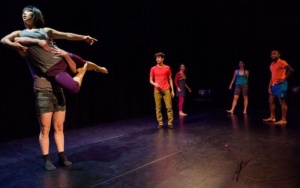 Split into two distinctive pieces, Lucky Plush performed “Rink Life” taking inspiration from child-hood roller skating rinks and the interconnectivity between people and their ever evolving landscapes, and “Curb Candy” a greatest hits melody package reworking several vignettes from previous Lucky Plush pieces, into a new mash up of movement. Syphoning humor from the absurdity of Olympic curling with coffee cups, flying marshmallows, oversized balloons as fashion accessories and the overly used concept of chairs as props in modern dance, all were mined to calculated comedic punctuation perfection. The “Study on a Bench” piece proving my favorite of the night. 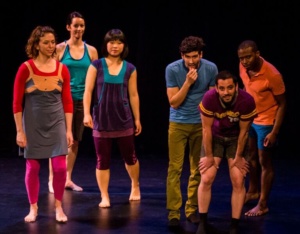 I will give one piece of well intentioned critical advice, this show was truly for the modern dance lover, offering little appeal to just the casual observer. I was fortunate to be sitting closely to the stage. The Harris Theater has over 1,300 audience member seating options. I couldn’t help but feel the people in the back few rows would lose out tremendously on the quiet whispers of the performers on stage. At upwards of $70 a seat, Lucky Plush Productions needs to either up its staging game, or elect to perform in exclusively intimate spaces. The Harris stage is quite beautiful, but swallowed up this troupe like Moby Dick to Captain Ahab and the crewmembers of the Pequod. 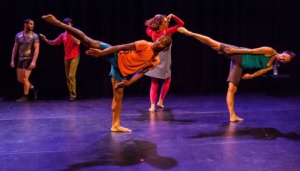 RossOctober 21, 2021
Read More
Scroll for more
Tap
Don’t Miss Dick Van Dyke, John Kander, Carol Lawrence, Ben Vereen and More on Chita Rivera: A Lot of Livin’ to Do
See All The Tony Nominated Shows and More With Stars in the Alley