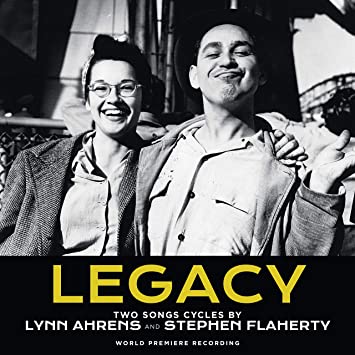 On December 1th, Lynn Ahrens and Stephen Flaherty released with Broadway Records unearthed demos of two song cycles recorded 16 years ago. These never-before-heard songs have been remastered and feature vocal performances from the late Marin Mazzie, Jason Danieley, Sarah Uriarte Berry, and Steven Pasquale. A Hard copy will be out this Friday and you can access the album on Spotify and all music venues.

On 1859: A Farmer’s Diary Mazzie and Danieley sing about their lives from a diary of an upstate New York farmer written over the course of one year. In A Boy With a Camera Berry and Pasquale are inspired by photographs of New York City taken in the ’40s and ’50s by Ahrens’ father.

The project came as the spread of COVID-19 forced Ahrens and Flaherty to pause and reflect on their career.

Legacy is produced by Ahrens, Flaherty, and Michael J. Moritz, Jr. The album features Flaherty at the piano, with Steve Marzullo at the keys for A Boy With a Camera.

Ahrens and Flaherty’s are know for their works on Lucky Stiff, Once On This Island, My Favorite Year, Ragtime which won them the 1998 Tony Award for Best Score, Seussical, A Man of No Importance, Dessa Rose, The Glorious Ones, Rocky the Musical and Anastasia. The pair are currently working on the Broadway-aimed Marie, Dancing Still, which was produced in 2014 at the Kennedy Center under the title Little Dancer. Also Knoxsville starring Danieley which is slated for the Asolo Theatre. Set in Knoxville, Tennessee, in 1915, the musical concerns Jay Follett and his son Rufus. When an unexpected turn of events leaves Rufus’ family spinning, he and his mother Mary embark on a journey through the mysteries of life and death, faith, and doubt, in order to come to terms with what they have lost and what they have found. Based on James Agee’s Pulitzer Prize-winning autobiographical novel A Death in the Family and, in part, on Tad Mosel’s play All The Way Home.

The video is by Magda Katz

Gemma’s Gem of the Week: Top 5 Films and TV Shows to Watch this Thanksgiving!