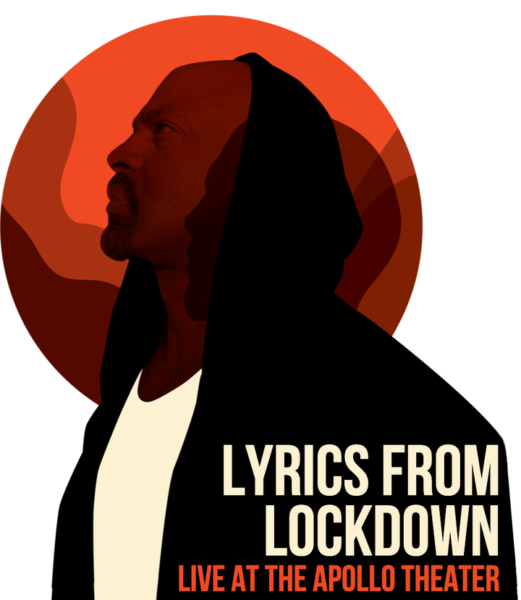 The award-winning theatrical hip-hop and multimedia production Lyrics From Lockdown, written and performed by renowned artist and activist Bryonn Bain, will play one historic performance to a live audience at the world-famous Apollo Theater in Harlem on Monday, August 29 at 7PM. The performance, directed by Gina Belafonte and executive produced by Harry Belafonte and Roger Lehecka, will feature a special simultaneous livestream, made available to over a thousand incarcerated men, women, and youth in correctional facilities across the country and in prisons in Africa and Europe. 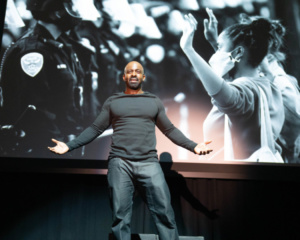 Lyrics From Lockdown is a groundbreaking multimedia theater production, exposing the unresolved contradictions of prisons and policing in America. Weaving together over 40 voices, including California choirboy Nanon Williams, who was sentenced to Death Row in Texas at 17, an immigrant family in Brooklyn, and a wrongfully incarcerated Harvard Law student, this unforgettable performance is a one-man tour de force. Fusing hip hop theater, spoken word poetry, comedy, calypso, and blues — with a live band and video DJ — this extraordinary production exposes systemic injustice in the nation incarcerating more people than any other in the world. 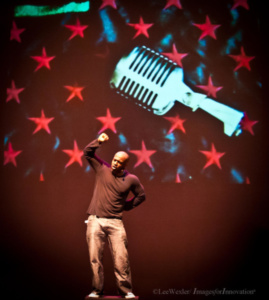 Following life-altering encounters with police, Bryonn Bain was wrongfully imprisoned during his second year at Harvard Law School. Once exonerated, he put his pain on the page and penned the powerful Village Voice exposé called “Walking While Black.” His story was the most widely read piece in the newspaper’s history, led to a “60 Minutes” feature with Mike Wallace viewed by over 20 million, and planted seeds for Lyrics From Lockdown. The solo show debuted at the National Black Theater in 2013, originally directed by Mei Ann Teo, with legendary artist/activist Harry Belafonte and Gina Belafonte as Executive Producers of the World Premiere. 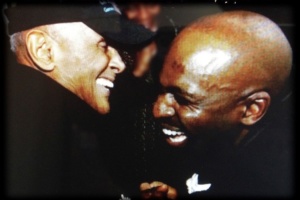 Lyrics From Lockdown has gone on to earn rave reviews for productions on three continents including a record-breaking, sold-out run at Academy Award winner Tim Robbins’ Actors’ Gang Theatre in Los Angeles, The Kennedy Center for the Performing Arts, Carnegie Hall, and more. It won the LA Weekly and NAACP awards for “Best Solo Performance.” Bain developed the show while working with Blackout Arts Collective, the grassroots organization he founded, through which he organized the annual Lyrics on Lockdown Tour, to bring arts-based political education behind bars. The program reached prisons in over 25 states, spawning performances, lectures, workshops, courses, conferences, and residencies at prisons including Sing Sing, Folsom, Rikers Island, DC Jail, Luzira (Uganda), Brixton and Whitemoor (UK), in addition to over 250 universities worldwide, such as Juilliard, Harvard, Yale, Cambridge, and Oxford. 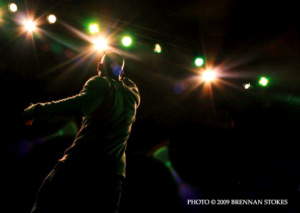 The production has garnered widespread attention from activists, theater artists, hip hop pioneers, and media including the New York Times, who raved that Lyrics From Lockdown is, “…truly polished, meaningful, and entertaining… and [Bain’s] lyrics — a stirring mix of lament and demand — pack a punch”. Harry Belafonte, who has championed the show for a decade, says: “The world needs to see how Bryonn Bain’s Lyrics From Lockdowncarries the tradition of joining art and activism as an instrument for justice – at a time when the prison system has our communities in crisis.” “Every moment on stage is filled with a thing of beauty,” added legendary actor and playwright Anna Deveare Smith. The Father of Hip Hop DJ Kool Herc called Bain, “a legend in the making,” and scholar and activist Angela Davis thrillingly calls Bain’s Lyrics from Lockdown a, “Tour de force.” Legendary labor organizer Dolores Huerta remarked after seeing the production for the first time, “Every person in the United States should see this show!”

Lyrics From Lockdown at The Apollo Theater is produced by Claudia Peña, Lisa Carnoy, Shamya Ullah, and four-time Tony Award Winner Dr. Ron Simons (Ain’t Too Proud, Jitney). The Associate Producers are Rosie Rios and Cheryl Dennis. It is a collaboration between the Centers for Justice at UCLA & Columbia University. Lyrics From Lockdownis presented by For Freedoms and is co-sponsored by Columbia University’s Office of Alumni Affairs and Office of the Dean of Students and Art for Justice Fund, a project of Rockefeller Philanthropy Advisors.

Bringing together the nation’s most marginalized and most privileged, this historic performance of Lyrics From Lockdown – live from the Apollo Theater – will be followed by a Town Hall discussion with Lee Walton (the mother of Nanon Williams), K Bain (Founder and Executive Director of Community Capacity Development (CCD) – the nation’s leading community-based, anti-gun violence organization), Cheryl Wilkins (Co-Founder of the Columbia University Center for Justice), Claudia Peña (Co-Director of the Center for Justice at UCLA & Executive Director of For Freedoms, a national arts organization working to model and inspire civic engagement), and moderated by the show’s director, Gina Belafonte.

Bryonn Bain is a Tony nominated theater maker, Bain hosted an award-winning talk show on BET called “My Two Cents,” appeared on “The Rachel Maddow Show” on MSNBC and was featured on the Emmy Award-winning TV series “LA Stories.” He has written multiple books including, The Ugly Side of Beautiful: Rethinking Race and Prisons, published by Third World Press with a foreword by Mumia Abu-Jamal and introduction by Lani Guinier. His most recent book, Rebel Speak: A Justice Movement Mixtape, was published by UC Press, with a foreword by Angela Davis. Read more athttps://www.bryonn.com/

A limited amount of $25 General Admission tickets are available for purchase at Ticketmaster.com.