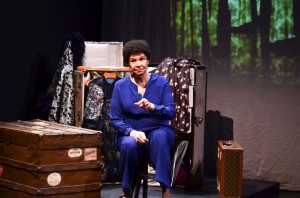 Mabel Mercer was an English-born cabaret singer who was was a featured performer at Chez Bricktop in Paris. Due to the Nazi’s treatment of blacks, Ms. Mercer came to the states and performed in such clubs as the Carlyle and the St. Regis Hotel. Eventually she even had her own room, where Frank Sinatra, Tony Bennet and Leontyne Price studied her and made no secret of his emulating her phrasing and story-telling techniques. Ernest Hemingway, Gertrude Stein, F.Scott Fitzgerald and Cole Porter were among her admires.

In January 1981, she was honored by the whitney Museum of American Art with “An American Cabaret,” the only musical event of its kind at that point in the museum’s history. Mercer was the first guest on Eileen Farrell’s program on NPR and she received the Presidential Medal of Freedom, in 1988 for being “a singer’s singer” and “a living testament to the artfulness of the American song.”

We meet Mabel Mercer in fear that this is her last show, that her long-time friend/manager is abandoning her and that she is too old. On stage for the last time, she confronts the events that has led her to this moment. The moment she confront her British white mother who has refused to acknowledge her black daughter is touching. Through Ms. Beverly’s eyes we get to meet the real Mabel Mercer as she reveals her life as she is about to take her final bow.

Ms. Beverly is a powerful actress with a rich alto register. She also has a strong soprano, but there is a break within the two registers. She does best with the two original songs by Mr. Levitt and  Mr. Napolitano. She sings these songs rather that imitate Ms. Mercer, who spoke through them. She rarely allowed the melody  to linger as she made each word count.

Ms. Beverely was award the emerging new playwright award by Urban Stages. This $500.00 award is not bestowed every year, but when Frances Hill and Urban Stages is impressed and this play impressed them.

Nicholas Blade Guldner’s projection design’s allow us into the time period and let us look inside this incredible singers world.

Suzanna BowlingNovember 9, 2022
Read More
Scroll for more
Tap
Cat Fights Flare in Women Without Men
Elizabeth Taylor’s Pick’s For The Oscars as She Goes Behind The Scenes