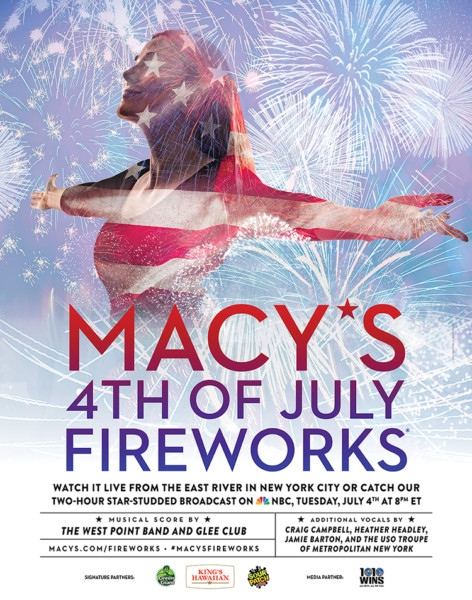 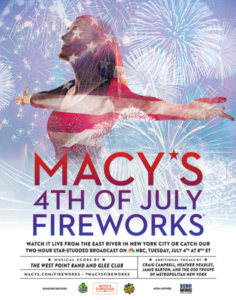 The 41st “Macy’s 4th of July Fireworks Spectacular” once again returns to the East River. Join the nation’s biggest birthday party, at 9:25 p.m. This magnificent 25-minute display will feature pyrotechnics with brand new designs that incorporate color changing chrysanthemums, purple crackling ghost peonies, orange bees, and pulsing happy faces in 23 electrifying colors including fuchsia, lemon and aqua. More than 60,000 shells will launch from five barges along the East River. That’s a significant increase over last year’s show where only 52,000 shells were launched.

The score for the firework choreography, will feature performances from the West Point Band, which has lent its instrumental talents to create Anthem, the show’s inspiring all-American musical tribute. Featured are new arrangements of Independence Day favorites like “Yankee Doodle,” “You’re A Grand Old Flag,” and “America the Beautiful.” Opera singer Jamie Barton will sing “The Star Spangled Banner.” Nashville’s Craig Campbell will sing a tribute to our vetern’s with “American Anthem.” Grammy and Tony winner Heather Headley brings the Elvis Presley gospel classic “If I Can Dream.” These lyrics were inspired by Martin Luther King Jr’s, inspirational message. For the finale and “Golden Mile” a new arrangement of “The Battle Hymn  of the Republic,” is sure to inspire.