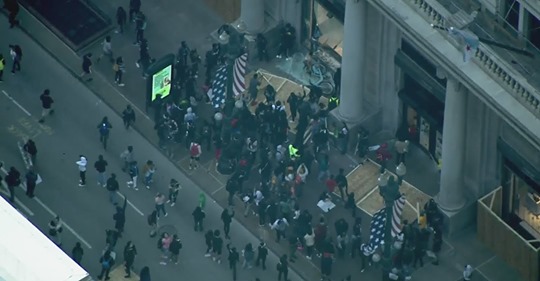 Macy’s was on the verge of bankruptcy before tonight and still they gave us The Macy Thanksgiving Day Parade and the 4th of July Fireworks. Tonights mischief just might have pushed the company over the edge. 5th Avenue’s luxury stores and those on Madison and Lexington were also ransacked.

In 1858, the first Macy’s Department Store opened a store in New York on 6th Avenue. The grand opening made a whopping eleven bucks, which in 1858 was equivalent to around $300. In 1902, R.H. Macy and Co. moved to its location in Herald Square, at 34th Street and Broadway. Macy’s was the top employer in New York, from garment buyers to sales clerks. By the 1920s, many women were entering the workplace, and Macy’s offered a ladder to climb.

In 1924, the staff of Macy’s collaborated to create the first Macy’s Day Parade. A quarter million attended. The first parade was held on Christmas Day, later to be moved to Thanksgiving, just in time to kick off the holiday shopping season. During the 1940s, Macy’s biggest competitor was Gimbels. The movie “Miracle on 34th Street” boosted sales at both stores for decades.

Stephen SorokoffSeptember 21, 2022
Read More
Scroll for more
Tap
The Mayor’s Daughter is Arrested, People Are Being Bused in As New York is Still in Lockdown
The Take Down of NYC Continues