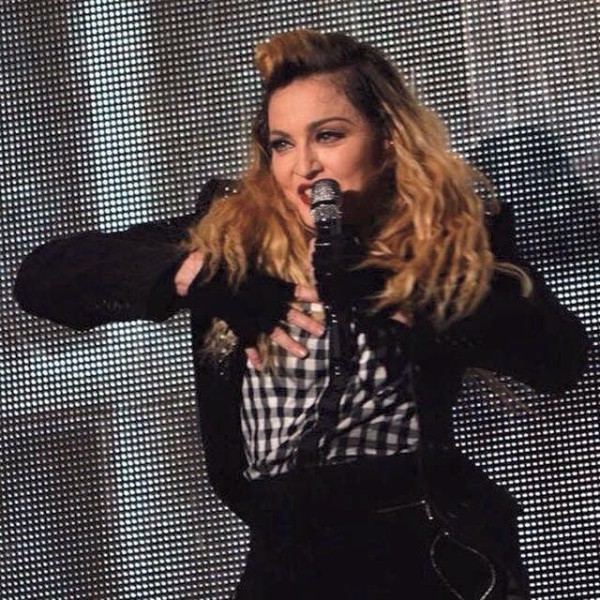 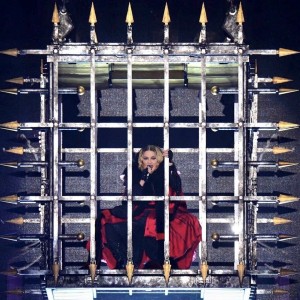 When you look at this artist by the sheer numbers alone, Madonna Louise Ciccone is a one of a kind, iconic entertainer. This 5’ 5” Bay City, Michigan native has amassed 12 Grammy Awards, 3 American Music Awards, 39 Billboard Magazine Awards, 2 Golden Globes, 20 MTV Video Music Awards, recorded 13 albums, released 82 singles, produced 69 music videos, headlined 10 world tours, appeared in over 26 movies, and sold a staggering 520,000,000 records, globally. Not bad for a 57 year old pop star, with a song book featuring 4 decades of solid hits, and of whom Time Magazine once famously stated in 1985 “Cyndi Lauper will be around for a long time. Madonna will be out of the business in six months.”  Whoops.  Let’s add a few more numbers to the lexicon that is Madonna stats.  9/28/2015 is when Madonna brought her sold out Rebel Heart Tour to the United Center in downtown Chicago. Finally 9:38 pm which is the time when the “Material Girl” took to the stage for over two hours of song, dance, video montages, costume changes, and all things Madonna. 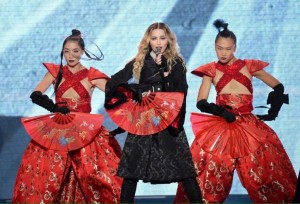 Descending to the stage in a steel cage from high above the stage, wearing a red and black couture cloak with black stiletto boots, Madonna opened her show with newer releases “Iconic” and “Bitch, I’m Madonna” while fighting off a dozen well muscled, armored, back-up dancers.  “Alright, are you with me Chicago?” Madonna probed after stripping down to a transparent black mini-skirt and stockings. Grabbing a bass guitar, she next entertained with some wicked guitar licks of her own to the 1980’s dance floor classic “Burning Up.” “I’m hot in here” she purred as she strutted. It is not a Madonna show with out a little Catholic School girl scandal, so out walked a team of sexy, pole dancing performers, scantily clad in frilly panties and nun habits to the soundtrack “Holy Water” the bridge of “Vogue” and “Devil Pray.” Seeking inspiration from world renown Renaissance paintings, Madonna finished this first set with her hands securely bound in red ropes, much like what an alter boy would wear, joining a litany of dancers in a sexy silhouette impersonating a very salacious Last Supper scene.  The last temptation of Madonna, as it were. 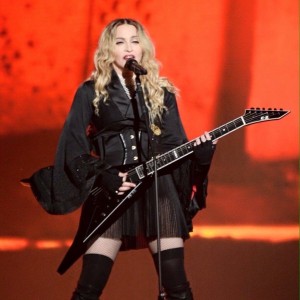 If the first set was to push political buttons, the second set was strictly a walk down memory lane. Set in a mechanic’s garage, and dressed in blue and black Prada plaid, the audience was treated to “Body Shop” and “True Blue,” a song she performed acoustically for the first time since 1987.  Making this moment of nostalgia perfect, a competitive audience sing-a-long while Madonna perched atop a chair of over-sized car tires. Joined by a dozen dancers doing their best country line dancing choreography, the 1990”s were revisited with “Deeper and Deeper” off the “Erotica” album.    Rounding out this set the new ballad “HeartBreakCity”sung on a spiral staircase at the edge of her set. Proving she has cultivated her singing chops, a chilling rendition of “Love Don’t Live Here Anymore” and being Madonna, a tongue-in-cheek, bump and grind, twerk filled rendition of 1984’s “Like A Virgin.”  Take that Miley. 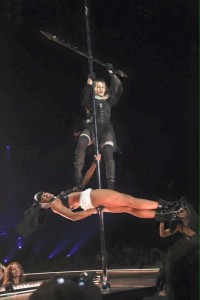 The following vignette featured an all Latin theme concept. Once again performing “Living For Love” in a long purple cape, The Material One stumbled with her balance when approaching the steps of her stage. You may recall last year when Madonna was famously videotaped being pulled off stage at an awards ceremony in Europe performing this same song , wearing a similar cape. Perhaps she should just leave the capes to Superman, but ever the consummate performer,  she soldiered on, undaunted. Reminding the audience she was once a University of Michigan Dance Scholarship recipient, we were treated to a fury of Latin choreography;  Flamenco, Paso Doble, Rumba, Samba, and a passionate Tango set to the familiar beats of  “La Isla Bonita,”  “Dress You Up,”  “Into The Grove,”  and “Lucky Star.”  “Come on Chicago, dance with me!”  Madonna jested to an enthusiastic  crowd already on their collective feet.  Slowing things down a bit, Madge spoke of her love of the Windy City.  “I made a baseball film here years ago”  she quipped, referring to the Penny Marshall film A League of their Own. Strumming her guitar, Madonna next sang the title track to “Who’s That Girl?” “Ghosttown” and  concluded this set with “Rebel Heart.” Before leaving the stage she exclaimed “to start a revolution of love, you have to have a Rebel Heart.”

The final treatment was an ode to the roaring 1920’s, Great Gatsby influenced romp with topless dancers inspired by the Madonna of her time, Josephine Baker, with flapper fringe galore. “I know you are in my tribe” Madonna cried out, before a spirited frolic through “Music” and “Candy Shop.” It is not a Madonna show with out  “Material Girl” which she completed, ornamented in a white veil, mimicking a bride walking down the isle.  She exclaimed “I’ve been married a few times” before tossing her bouquet to a same sex couple standing close to the stage.  “It goes downhill from here” she wisecracked.   With two male dancers framing her center stage, one lit a cigarette while Madonna warned  “I don’t smoke,  but I like to start fires.” She next asked the audience to sing along with her, in French, to one of her favorite songs, Edith Piaf’s “La vie en rose.” With a surprisingly strong voice, an emotional Madonna sat, crossed her well toned legs, and serenaded the enthralled crowd. Speaking of legs, her quadriceps are those of a 20 year old marathon runner. Let’s add another number to the statistics of the night, 0. As in zero percent body fat.  Keeping it right and keeping it tight seems to be Madonna’s mantra. Finally, selecting a bridal clad drag queen from the front row in audience to come on stage, Madonna finished with “Unapologetic Bitch.” 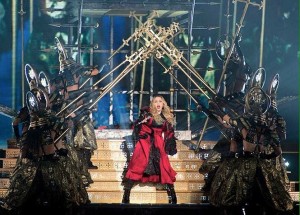 After about ten minutes of thunderous applause, Madonna returned to the stage, one last time, for her final encore. Draped in the American Flag and a red top hat, she finish the show with her first pop hit, “Holiday.” Joined in jaunty merriment on stage by over 20 back up dancers, with images of National Flags from all over the globe were projected on large video screens behind her.  A global holiday indeed.  Over two hours of song and dance and over 40 years of hits, Madonna’s reign continues. While she may not get the radio play she once had, Madonna spent the evening uniting all the Rebel Hearts of the Windy City for a night of jubilant celebration.  Strike a pose for endurance. 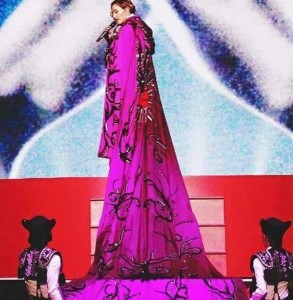 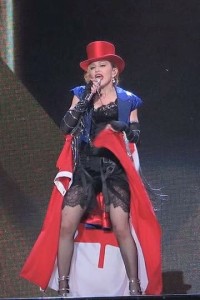 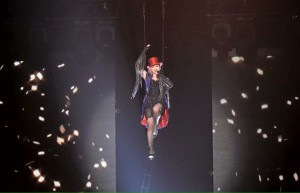 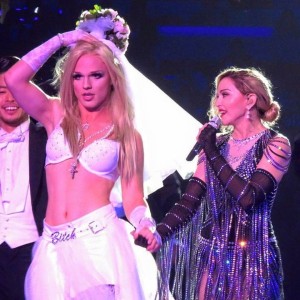