Maestro Misses the Musicality of Toscanini

Maestro Misses the Musicality of Toscanini 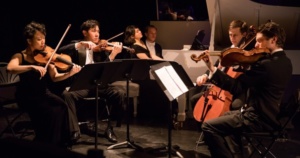 The merging of extremely well done classical music, glorious projections, at times dance, along with stories of famous artists, makes the Ensemble for the Romantic Century unique.  I have long been an admirer of what the Ensemble for the Romantic Century is trying to do, however in Maestro, it is hard to concentrate, as the actor playing Arturo Toscanini hasn’t a musical bone in his body. He hits the music stand not with authority, but with a limp wrist, so of course the orchestra would be unimpressed. His down beats are out of sync with the music and his other hand flails around like some odd butterfly. Within the first five minutes of this play, I wanted out, because to me this was like nails on a chalk board, as I have a background in music.

Under the direction of Donald T. Sanders, John Noble as Toscanini, is an unintelligible, one-dimensional, inconsistent actor. He is either raging or seems as if he is in the TV movie of the week. Vanessa James (costumes) have not helped, nor has the dialect coach or wig designer, if there were one. Nobel and Maestro, has made Toscanini unlikeable.

Toscanini is a fascinating man who defied Mussolini’s Italy and refused to play concerts for Nazi Germany. He retaliated by conducting concerts in Palestine. Relocating to America, he served as Music Director of the Metropolitan Opera, the New York Philharmonic and the NBC Symphony Orchestra. He was well known for an outrageous temper and you can hear it on youtube., but according to every musician who ever worked with this accomplished conductor they claimed his temper was worth it because he brought out the best in them.

Written by Eve Wolf (the company’s Founder and Executive Artistic Director), the play concentrates on his love letters to his much younger lover Italian pianist Ada Mainardi who was  the wife of Enrico Mainardi, one of the most important cellists of his generation. The letters were only found in 2002. The play also tries to subliminally equate the holocaust with the immigrants of today, which I find highly insulting. The immigrants of the holocaust were fleeing for their lives. There’s a difference.

What does work is the brilliant chamber orchestra headed by Mari Lee and Henry Wang on violin, Matthew Cohen on viola, Ari Evan on cello. Their playing is exquisite. Zhenni Li’s piano playing is an emotional journey. Maximilian Morel’s arrangement and multiple trumpet playing, brings down the house with George Gershwin’s Rhapsody in Blue.

Inter-spliced are recordings of period music, radio newscast on World War II (featuring the voice of Paul Sorvino).  The projections by David Bengali, blend visual imagery, time period footage and abstract images. I do wish the running texts would have been on both sides, so I didn’t miss a lot of the history. 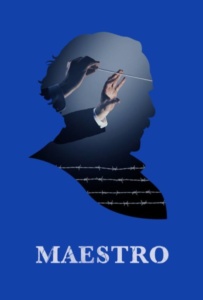 Maestro had the possibility of really blending all creative crafts to tell a story of our past, so that our future does not repeat itself. Bravo however to the brilliant musicians and David Bengali for his creative projections that are haunting and timely. Also kudos to the Ensemble for the Romantic Century for their brave attempts to merge art forms. Sometimes they work, sometimes they don’t.

Maestro: Ensemble for the Romantic Century at The Duke on 42nd Street, 229 West 42nd St. until Feb. 9th

Suzanna BowlingJanuary 13, 2022
Read More
Scroll for more
Tap
Ethan Slater and More to Star in Benefit Reading of Significant Other
Harry Potter and the Cursed Child at BroadwayCon