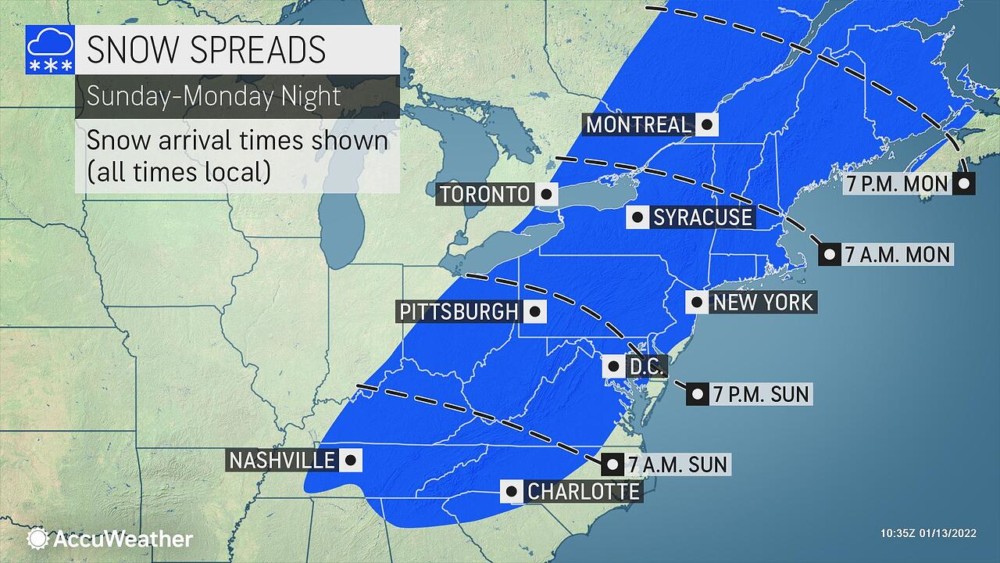 A storm is expected to produce a large area of snow and ice from the Plains and Upper Midwest to the Southeast and then Northeast through this weekend into early next week.

The storm will initially dive southeastward across the nation’s midsection and deliver significant snowfall from the eastern Dakotas to Arkansas.

The storm is then expected to rapidly strengthen along the eastern seaboard Sunday night and Monday as it moves toward the north and northeast. This storm will likely cause widespread snow and ice that can lead to significant travel disruptions and potential power outages.

This storm has the potential to produce a damaging ice storm over portions of the interior Southeast later this weekend. This may lead to temporary road closures.

Farther south, there is the risk for locally severe thunderstorms Saturday night into Sunday.

At this early stage there is still some uncertainty with the eventual track, especially from Sunday through Monday, which will be critical to the placement of the heaviest snow and ice.

In addition to heavy snow and ice, there is the risk for strong winds, especially along the coast from the Carolinas to Maine. Residents from the Southeast to the Northeast should be prepared for possible power outages.

Based on the expected track, it appears that the snow may mix with or change to ice then rain along the I-95 corridor from Virginia to southern Maine.

If the storm ends up weaker and a little more offshore the highest accumulations may end up between the I-81 and I-95 corridor with less snow from the Appalachians on north and west.

In the Washington D.C. area, snow is expected to commence late in afternoon on Sunday and then change to sleet and possibly rain Sunday night. Total snow and sleet accumulation before any changeover is expected to be 1-3 inches.

This storm has the potential to cause widespread, major travel disruptions. Any people planning on traveling through the affected regions during the period should closely monitor AccuWeather for additional updates on the progress of this storm.

AccuWeather meteorologists will continue to update you on this dangerous winter storm through the weekend.

For more information on this event, see the AccuWeather.com story here: https://www.accuweather.com/en/winter-weather/saskatchewan-screamer-could-leave-a-foot-of-snow-for-some-in-midwest/1125077