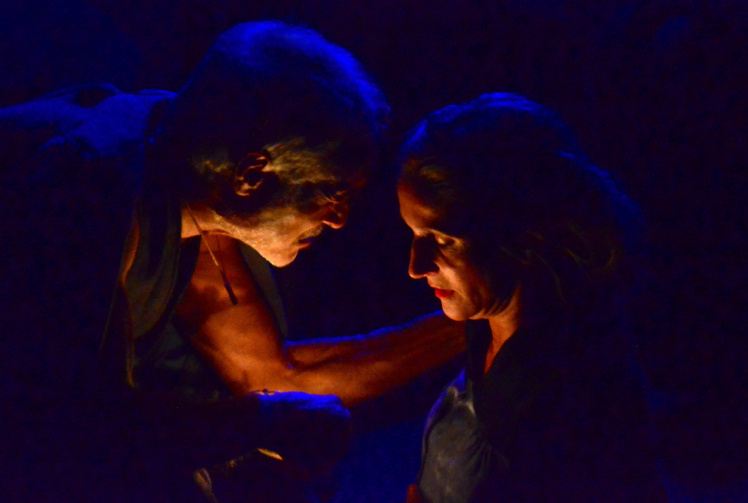 Makbet: Bring a Cushion, And Get Ready For Some Shakespearian Role Play.

Makbet: Bring a Cushion, And Get Ready For Some Shakespearian Role Play. 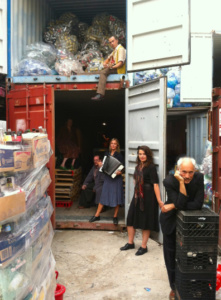 Better brush up on your Shakespeare if you plan on taking in this very fun and inventive staging of MAKBET being produced by Dzieci Theatre in Bushwick. The show takes place in a closed door storage container at the Sure We Can non-profit recycling center, community space, and sustainability hub in Williamsburg (site supervisor: Rene DelCarmen; Executive Director: Augustina Besada). I kid you not.  It’s a bit tight and hot inside the long metal rectangular box, with rows of milk crates for chairs where this Gypsy-infused take on Shakespeare’s Macbeth will materialize out of nothing more than a few hats, scarves, and a pair of reading glasses. An ensemble of pretty incredible actors take turns spontaneously trading off parts at the drop of a hat, quite literally. As adapted, directed, and designed by Matt Mitler (New Victory Theater’s Sofrito), the ageless tale of greed, murder, omens, and magical incantations springs up and captivates us all, more or less.

1/ Actors must know the entire text. 2/ Actors may not play the same role in successive sequences 3/ Roles can be taken or given, embraced or refused. 4/ Three actors alone will play the principle roles 5/ We begin and End in ceremony 6/ Nothing else is planned.

The three players of all parts swap hats, glasses, scarves, and a coat, each representing different specific characters (costumes: Karen Hatt) within this pared down Macbeth.  Megan Bones, Yvonne Brechbuhler, and Matt Mitler seamlessly go in and out of character (and odd accents sometimes) switching at a moments notice from one role to another, regardless of gender or age. It is quite the achievement as it truly does appear to not be planned in advance. The casting off of a role almost, at moments, feel like a game between these actors, as if they are trying to stump one another into messing up a line here or there. Not that anyone would notice.  I know this play like the back of my hand as it is one of my favorites, but this edited down version moves so quickly through the story that a line lost here and there would probably go unnoticed.  Whether that happened or not the night that I saw it, it doesn’t take away the astonishing ability the three have to stay focused and attuned to the text and each other.

The only problem that arises from this tricky game of role playing is that at points the swapping of hats muddles and confuses the movement of the story.  It would be difficult to enter this space to see this telling of Macbeth without a solid knowledge of the true Shakespearian play. At times the actions, especially the loud screams and shrieks that accompany moments of violence make it almost impossible to hear the lines being said, and for a virgin to Macbeth, I can only imagine how confusing this story could become. It’s also such an interesting environment to stage such a play, and generally the action, lighting, and maneuvering is chaotic but inventive.  The spontaneity of role play probably is to blame for the lack of a smoother blocking style, and even though the space could be better or more grandly used, the feistiness of the ensemble makes the cacophony palpable.

Ultimately, the story is told simply and somewhat on a dizzying swirl of similar levels.  Subtlety is not a word I would use for any of the scenes and performances, as rambunctiousness is the main go-to volume.  I was hoping for more levels and shades as we move through this complex story, especially with moments like the death of Lady Macbeth.  It was handled as expected with loud wailing and deafening cries, which felt far too similar to other moments of pain or death. The fight scenes were equally loud, and oddly choreographed with what looks like a lot of karate chops.  But in the end, the story unfolds dramatically, and we are engrossed (for the most part) in the telling of it.

Sitting around the space, are the other members of this ‘Old Country’ gypsy chorus. They are the same ones who greeted us as we arrived with exuberant songs, libations, and divinations before leading us into the box. Ryan Castalia, Felicity Doyle Golan, Jesse Hathaway, and Chris Cook, all help create mood with sound and song that have the stereotypical flavor of old Russian transients.  They hum and play musical drums that magically create quite the atmospheric soundtrack during the play, sometimes even using the metal walls quite expertly like a percussion instrument. Even though too much space is given to the singing of what sounds like gypsy folk songs (music supervisor: Ryan Castalia) in-between scenes, the choral direction by Hathaway is surprisingly effective.  Less might be more here, although I find it almost comical that I’m thinking the 100 minute telling of Macbeth could be done tighter and smoother.

This production is not for the comfort seeking theatre goer by any means.  If you complain about the level of physical ease in a typical small theatre seat, or the long lines at the not-so-well equipped Broadway house, than you might want to pass on this stuffy and claustrophobic environmental theatrical experience. But for the adventurous soul, who loves the experimental aspect that Shakespeare plays can sometime gift us with, than by all means, take the ‘L’ train out to Brooklyn, grab a bite, a drink, and a bathroom visit along Bushwick Ave, and find yourself drawn into an ritualistic and riotous production of the Scottish Play.

Suzanna BowlingMay 17, 2022
Read More
Scroll for more
Tap
The Rape of the Sabine Woman by Grace B. Matthias: A Dark Comedy About R. A. P. E. Culture.
2017 Chita Rivera Awards: The Winners and the Star Studded Carpet