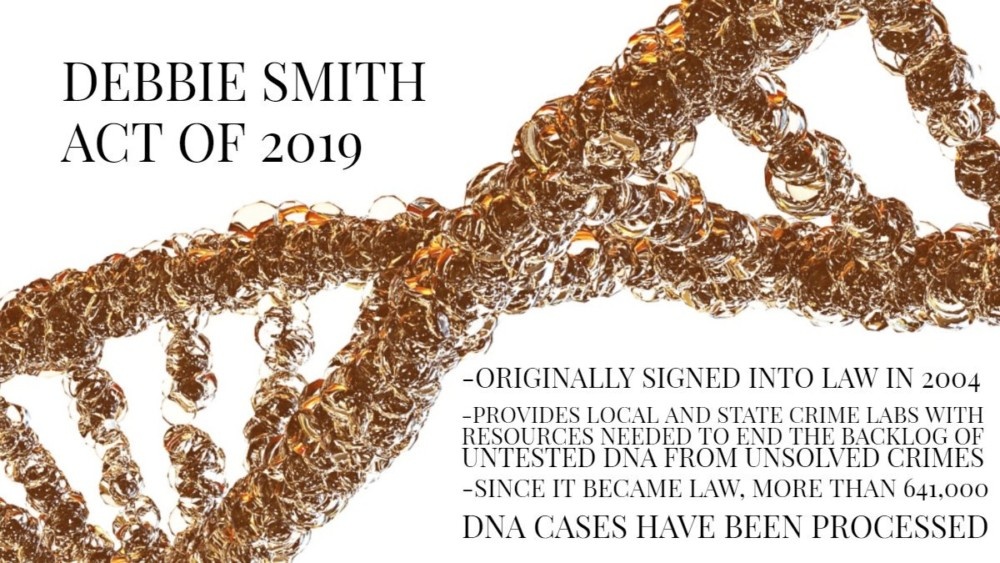 Do you know what The Debbie Smith Act is?  It is a law that ends the backlog of untested DNA evidence in rape cases.  Since it’s passage in 2004, The Debbie Smith Act has funded hundreds of thousands of backlogged rape kits, and has led to the identification of over 200,000 sexual assaulters. To lose this funding would be a devastating blow to rape victims, who are all too often failed by our criminal justice system.  The bill will expire on September 30th if the House doesn’t Act NOW.  What can you do?

Take one minute TODAY to call Nancy Pelosi, (202-225-4965) and urge her “to reauthorize the Debbie Smith Act before it expires on Sept 30th”

DNA evidence is often critical for achieving justice in crimes of sexual violence, but there are still challenges in the way it’s used to hold perpetrators accountable. The backlog of unanalyzed DNA evidence, often referred to as the rape kit backlog, is a major impediment to prosecuting perpetrators of sexual assault. The backlog includes evidence never sent to a lab for testing, often called the “hidden backlog,” as well as evidence that arrived at a crime lab but was never tested. The Debbie Smith Act, named after a survivor who eventually found justice through DNA evidence, was the nation’s first piece of legislation aimed at ending the backlog.

In 1989 Debbie Smith was sexually assaulted by a stranger who broke into her home. Although she underwent a sexual assault forensic exam, the DNA evidence went unanalyzed for over five years. In 1994, the forensic evidence was finally entered into CODIS, the FBI’s national database, and yielded a “hit” identifying the perpetrator. At the time, the perpetrator was already incarcerated, serving 161 years for robbing and abducting two women. He was brought to trial and eventually convicted for the rape of Debbie Smith.

If anyone you know has been affected by sexual assault, please alert them to this deadline and pass along Nancy Pelosi’s phone number if they’d like to make a call.

For more info on The Debbie Smith Act: https://www.rainn.org/articles/debbie-smith-act

My View: Norm Lewis…Show Stopper at The New York Pops Underground
My View: The Cabaret Season Has Started in Palm Beach