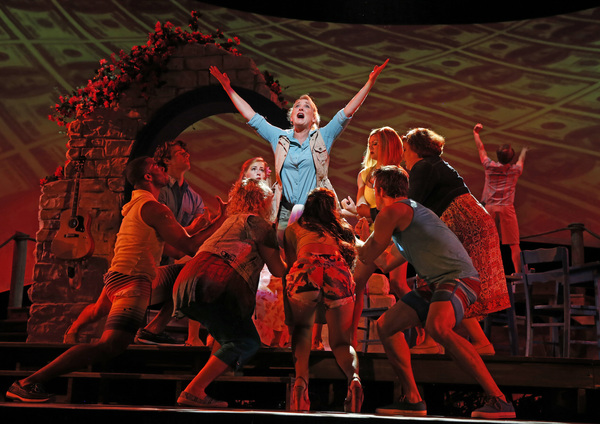 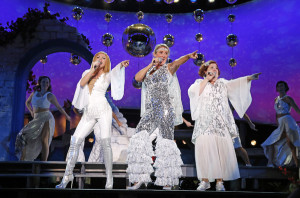 It was with great anticipation I ventured down to Aurora’s Paramount Theatre to see the regional debut of the winning jukebox musical hit, Mamma Mia. Generally, this show is one of the most reliably delightful, raucous, foot stomping, guaranteed bang for your theater going buck spectacles. Featuring music from the genius disco Swedish pop band ABBA, Mamma Mia has grossed over 2 billion dollars to date during its global run. Initially premiering in London in 1999, then making its American Broadway debut in 2001, just one month after the horrific September 11 attacks on New York City and Washington DC. Mamma Mia came along just as the wounded nation required a healthy dose of healing and a much needed laugh. The glitter of the pop soundtrack matched the sparkle of the spandex sequin bell-bottoms each of the outrageous characters wore. This was no small debut. Mamma Mia concluded its 14 year run on Broadway, closing on September 12, 2015 after 5,773 performances, making it the eight longest-running show in Broadway’s history. I should also mention the 2008 film adaptation of the musical, featuring Academy Award-winners Meryl Streep and Colin Firth with Pierce Brosnan, Christine Baranski and  Amanda Seyfried, as well as its global box office of $609.8 million. It was the third highest grossing film of that year and one of the most successful movie musicals of all time. To say I am a rabid fan of this internationally successful, hit jukebox musical would be an understatement. Unfortunately, what is currently unfolding nightly on the stage at the Paramount is not the Mamma Mia I know and love.  It is a shell of its former self. 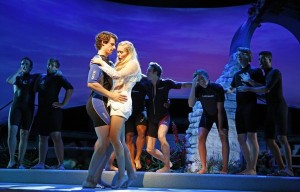 Now beginning its sixth season of its Broadway Series, Paramount Theatre has been on quite a role. I raved about their previous hits, including a version of RENT that was Broadway transfer ready, a commanding The Who’s Tommy, a visually powerful Les Misérables and a West Side Story that should do very well during next month’s Jeff Awards. The grittier take on that particular American classic will most likely win Jim Corti a well deserved trophy for Best Director. With that said, Corti’s grittier spin on Mamma Mia is a massive misfire.  I can understand wanting to put a signature spin on the Midwest regional debut of a massive crowd pleasing hit, but so much of the fun has been meticulously and surgically removed, I was left scratching my head instead of giggling infectiously. As this is a Regional debut, there isn’t a requirement to faithfully follow the previous incarnation. Financially, I am certain it wasn’t feasible. However cut from this show; Donna’s signature overall’s, Tanya’s blow up mattress act one oral sex joke, the hysterical chorus line of male dancers in swim flippers performing “Lay All Your Love On Me”, the provincial Greek peasant back-up singers predominantly on stage, the side-splitting intricate chair maneuvering during “Take a Chance On Me”, and sadly all of Anthony Van Laast’s exuberant original choreography. Many of the production numbers are performed with the cast simply standing still, or just wiggling their hips in unison to the music. Chicago may have a reputation for talent that sings far better then they dance, but the troupe here wasn’t even given much of a chance to showcase their individual abilities. Much of the eye-popping costuming was gone too. Inexplicably, all of the cast’s shoes disappeared, performing barefoot for over 80% of the show. Clearly in this version, Donna’s hotel doesn’t have a No Shirts, No Shoes, No Service policy. 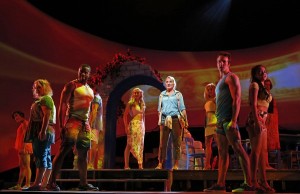 The story itself has remain intact, commencing with ingénue, Sophie Sheridan (Kiersten Frumkin) and her two bridesmaids, Ali (Sara Reinecke) and Lisa (Janelle Villas) sharing an all important secret. Sophie has perused her mother’s diary from the year she was conceived and decided to quietly invite her absentee father to her wedding. Make that her three possible absentee fathers to fill that coveted role. Bookish banker, Harry (formerly known as Head-Banger) Bright (Michael GIllis), travel writer Bill Austin (Steve O’Connell) and American architect Sam Carmichael (Jeff Diebold).  What did her invitations read?  “Come to my wedding.  You might be my dad?” Sophie quips. No, instead Sophie has addressed the invitations from her mother, Donna Sheridan (Amy Montgomery) one time front person for the fictional girl-power group, Donna and the Dynamos. Donna shared a passionate summer of love, as it were, with each of these three men. As if history was repeating itself, Donna has invited her two Dynamo best friends, jet-setting, plastic surgery connoisseur, divorcée, Tanya (Jennifer Knox) and earth mother, feminist writer, Rosie (Sara Sevigny) to attend the festivities too. The rest of the story is set to the addictive, surefire hit soundtrack of Abba’s songbook, including “Dancing Queen,” “Thank You For The Music,” “Voulez-Vous,” and the title track, “Mamma Mia” all played with verve by musical director Tom Vendafreddo and the Paramount’s extraordinary orchestra. 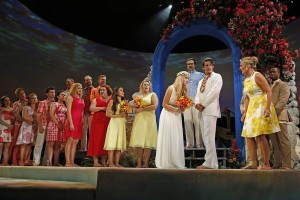 Mysteriously missing, the gifted mockery and playful chemistry between the three mature female best friends, traditionally on display during the vulnerable “Chiquitita” and saucy “Dancing Queen.” William Carlos Angulo’s fleeting choreography is predominately saved for the final 10 minutes of the show, with the exceptions of the finger wiggling “Money, Money, Money” and dream sequence “Under Attack”, which had Sophie spinning, literally and metaphorically, through her nightmare escapade. The ladies mostly step side to side during “Super Trouper,” a number that usually “kills”, and that was about it. I was more wounded by this approach than killed. I was also dumbfounded during what is normally Tanya’s showstopper, “Does Your Mother Know.” Knox’s Tanya and the younger man of her dreams, Pepper (Patrick Craven) a body building beefcake boy toy, just stood there for the first third of the song, surrounded by another half dozen troupe members, also just standing there. Flexing muscles is not dazzling choreography. The Paramount has an expansive stage, fill it up! Thank goodness a couple lifts and one “death drop” were added toward the song’s end, else this number would have fallen completely flat. 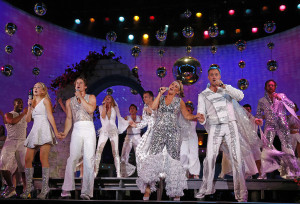 While specifically addressing the character of Tanya, a thrice-divorced woman of extraordinary wealth, I had one more serious issue with this interpretation. At the beginning of the production, she arrives with a dozen bags of luggage carried across the stage, a cute and inspired sight gag. Why in heavens’ name is she then barefoot for the remainder of the show?  What exactly was in those bags? No woman of means that I know or have traveled with would vacation without a half dozen designer shoes to wear and show off. Matt Guthier’s costume design fails the leading ladies terribly.  Each often visually lost in the scenes involving the large chorus. The wedding finale song, “I do, I do, I do, I do , I do” had 27 performers on stage at the same time. I counted.  All just standing there. Why pack a stage and then give the performers so little to do? Pretty, playful dresses does not an intriguing show make. As I write this review, it is currently fashion week in New York City.  Even those cat-walking characters moved more than most of this cast! Jettisoned, the original production’s flirtatious and whimsical concluding couples choreography, for reasons I just cannot comprehend.

All was thankfully not lost, the best thing about this particular rendition is the cast’s superlative vocals, nailing it every time. Montgomery’s “The Winner Takes It All” brought an emotional pathos, Diebold’s “Knowing Me, Knowing You” was simply sensational and for comic impact, “Take A Chance On Me” was still a winner, although here staged with Sevigny laying on the stage floor, pretending to be a mermaid, while O’Connell dropped down to his hands and feet, illustrating a chuckle inducing crab’s walk. A subtle plug for Paramount’s next show, The Little Mermaid, perhaps?

What was undeniably enjoyable and delightful, the disco dripping frenzied curtain call finale of Mamma Mia! Thankfully still intact in its entirety and delivered, concert style, with an enthusiastic mash-up of “Mamma Mia”, “Dancing Queen” and “Waterloo.” Of course you leave the show smiling, having just experienced that rousing conclusion, but a fabulous close does not a great show make. It troubles me to say the original gusto and zest has been painfully whittled out of a production which should shine so much brighter than it does. Mirrored disco ball brighter. The best part of this Mamma Mia was the mega-hit, pop music and lyrics composed by two of the four masterminds behind the global ABBA phenomena, Benny Andersson and Bjorn Ulvaeus. Catherine Johnson’s book may borrow a page (or two) from British novelist Shirley Conran’s popular beach read novels, Lace and Lace 2, of the scandalous lines “which one of you bitches is my mother” and “which one of you bastards is my father” that titillated readers throughout the 1980’s. My final question, which bozo decided to take most of the fun out of this Mamma Mia?

Mamma Mia! is now playing at the Paramount Theatre through October 30, 2016