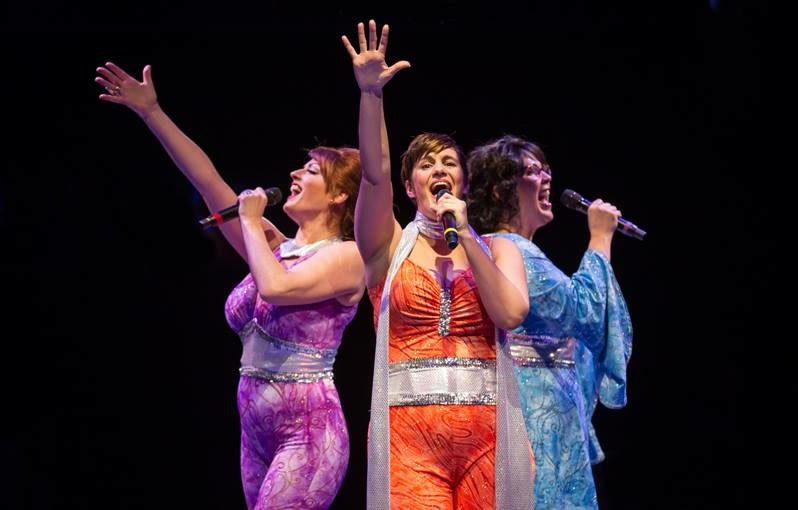 Mamma Mia! – Take a Chance On This Winner

Mamma Mia! – Take a Chance On This Winner 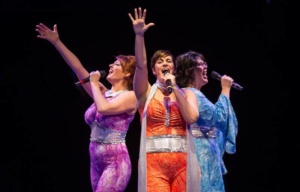 One of the most reliably pleasant, outlandishly raucous, girls-night-out musicals is kicking off the 2017 Season at the Marriott Theatre. This guaranteed bang for your theater going buck show is back and successfully burning up the ‘burbs. Mamma Mia! the delightfully campy, jukebox musical mega-hit, pop singing, party hopping, who’s my daddy, Greek isle delight, with music and lyrics composed by two of the four masterminds behind the global phenomena, ABBA; Benny Andersson and Bjorn Ulvaeus. Some additional songs are also composed with Stig Anderson. Catherine Johnson’s book may borrow a page or two from British novelist Shirley Conran’s popular novels Lace and Lace 2, of the infamous “which one of you bitches is my mother” and “which one of you bastards is my father” that titillated beach readers throughout the 1980’s, but do know, no one is here for heavy drama. Adding in the impressive and athletically rambunctious choreography of Ericka Mac, this funfest is neatly tied with a bright, hot pink feather boa under the direction of wunderkind Rachel Rockwell.  Officially closed on Broadway (September 12, 2015 was the final show after 5758 performances) it is enchanting to see such a faithful rendition, appearing near the Windy City, to a near sell out crowd on a nightly basis. The rabid fans of this modern-aged, treasured gem, ready to sing, clap and dance along, sharing their ravenous enthusiasm with this nonstop cast of twenty seven. 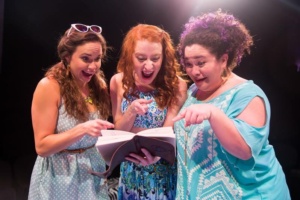 The story began with ingénue, Sophie Sheridan (Tiffany Tatreau) and her two bridesmaids, Ali (Kayla Kennedy) and Lisa (Lillian Castillo), sharing a most scandalous secret.  Sophie has read her mother’s diary from the year she was conceived and has invited her absentee father to her wedding.  The catch is there are three possible men to fill that coveted role. Bookish banker, Harry “Head-Banger” Bright (Karl Hamilton), travel writer,  Bill Austin (Derek Hasenstab) and American architect,  Sam Carmichael (Pater Saide).  What could her invitations have possibly read?  “Come to my wedding.  You might be my dad” Sophie quips. No, instead Sophie has addressed the invitations as though they are from her mother, Donna Sheridan (the luminous Danni Smith) who at one time was the leader of a fictional  1970’s girl-power group “Donna and the Dynamos,” and who also shared a passionate summer of love, as it were, with each of these three men.   As history has a way of repeating itself, Donna has invited her two best friends, jet-setting, plastic surgery connoisseur, divorcée, Tanya (Meghan Murphy) and earth mother, feminist writer, Rosie (Cassie Slater) to attend the festivities as well.  The rest of the story is set to the soundtrack of the highly addictive, surefire soundtrack Abba’s songbook, including “S.O.S,” “Thank You For The Music,” “Voulez-Vous,” and the title track, “Mamma Mia.” 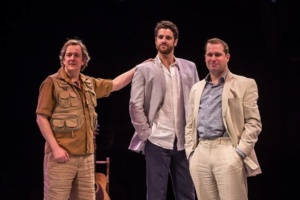 This particular cast is jam-packed with a treasure trove of gifted physical comedians.  Murphy’s Tonya and her fierce, white hot, rendition of “Does Your Mother Know” had me wanting more, more, more!  Packed full of titillating frivolity, Tonya and a half dozen dancing island boys, sporting both washboard abs and Oedipus complexes, Murphy’s Tanya is indeed my spirt animal!  This rowdy, statuesque red-head successfully stole every scene she was in. “Little boys who play with fire get their fingers burnt” she cooed. Slater’s Rosie, the modern day equivalent of fearless funny ladies from days past like Carol Burnett or Lucille Ball, but with a much more pronounced singing voice. Their gifted best friend mockery predominately on display during the vulnerable “Chiquitita” and amusing “Dancing Queen.”  Slater’s brazen take on “Take A Chance On Me” inspired a spontaneous audience clap-a-long, mid-song, while she climbed over chairs and frolicked like an ape to lure the attention of her intended paramour.  Watching these two divas in action was well worth the price of admission. 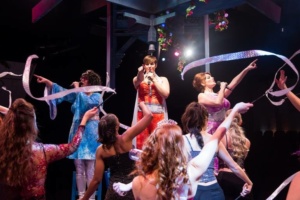 Then there is powerhouse belting, leading lady, Danni Smith, in the title role of Donna Sheridan. Smith is a four time Jeff Award winner and has appeared often in numerous Marriott productions. A proven good luck charm, Smith’s “The Winner Takes It All” brought an emotional pathos and substantive grounding to the aforementioned silliness. Adding to this talent, the lush, bell-bottom brilliance of costumer Theresa Ham’s wardrobe, the rainbow colored, spandex clad “Super Trouper” was an act one show stopper. The sight gag of a team of dancing chorus boys in scuba wetsuits and flipper fins prancing about in unison to “Lay All Your Love On Me” inspired additional audience catcalls from the audience as well.  But here, all the best lines and most powerful deliveries are all of the womanly variety. This show has more “Girl Power” going for it than a dozen Spice Girl albums combined. At its heart Mamma Mia is a show about the power of enduring female relationships, all the while proving itself a lighthearted comedy. “Typical, you wait 20 years for a father and then three come along at once.” 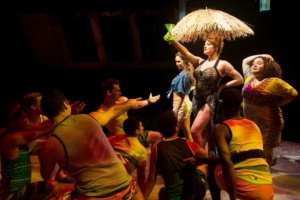 Enjoyable, delightful, frenzied, and a proven crowd pleaser, Mamma Mia!, has delighted the world over for the last 15 plus years. With the recent permanent production closed in New York, Mamma Mia! is now in the hands of regional theaters across the nation. A few months ago, the Paramount Theatre in Aurora attempted a more grounded concept that was not at all to my liking. I am pleased to announce the Marriott nailed it!  The overall gusto and zest of the show captured perfectly. The dynamite cast here working hard to mine the comic gold and life-affirming energy out of this material. Be warned, do expect to leap to your feet at the end for an audience sing-a-long to Abba’s international classics including “Waterloo.”  When it comes to surrendering to the power of Mamma Mia!, all I can say is  “I do. I do, I do, I do, I do, I do.”

Mamma Mia! at the Marriott Theatre is currently playing through April 16, 2017