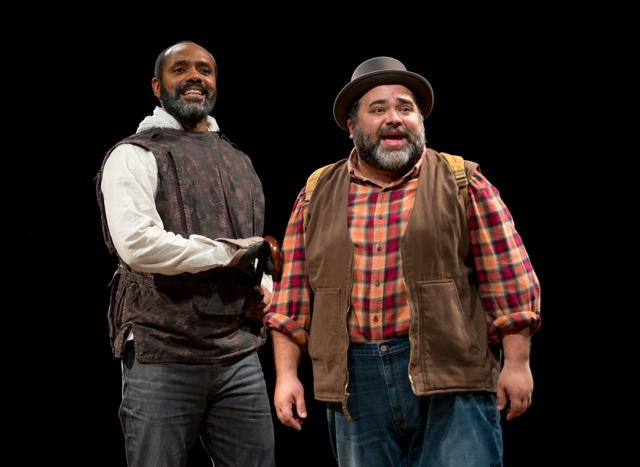 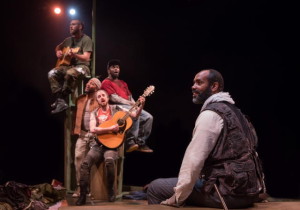 When I initially learned the Marriott Theatre was restaging Man of La Mancha, I have to be honest, I thought this would be “creative filler” at best. I am proud to announce I was dead wrong. Director Nick Bowling jettisoned the old to helm a new, brave yet daring reinterpretation of a classic. Keeping the gorgeous music by Mitch Leigh with lyrics by Joe Darion intact, the classic tale, initially played on Broadway in the mid 1960’s, about the adventuresome, yet delusional, Spanish knight who chased demons disguised as windmills to restore chivalry in his world while claiming his one true one, has been thoroughly updated, set in a stark prison holding cell. Jeffrey D. Kmiec’s set is unpretentious, with the action unfolding center stage. Gritty and unapologetic, with a brisk running time of 1 hour 45 minutes and no intermission, this rendition is revolutionary for the Marriott, who last saw Sister Act and Evita cross its theater in the round stage. Written by Dale Wasserman, the juxtaposition of hero/madman played out in prison makes refreshingly warped sense. 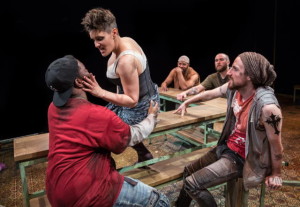 The protagonist of the piece is Don Quixote (an amazing Nathaniel Stampley) of strong voice if not failing mental faculties. He starts the piece as an accountant, and part-time playwright, hauled into custody for foreclosing on a monastery. Within minutes, he is attacked and robbed by his fellow prisoners, a collection of swarthy scavengers, out for themselves. The playwright formally requests an immediate trial by his peers, played out by reciting scenes from his manuscript with all of his fellow prisoners taking supporting roles. As soon as he brandishes a mop for a horse and bellows out his first rendition of “Man of La Mancha (I, Don Quixote)” the audience knows this is not your grandmother’s Man of La Mancha. 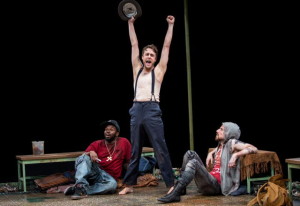 By his side, his faithful sidekick, Sancho (Richard Ruiz) interjecting much needed humor and heart in this world, hastily growing dire. Rounding out this terrific trio of leads, love interest, Aldonza (Danni Smith) a fierce, brazen feminist, more warrior Xena than fleeting fairy princess. Physically as strong as any of her male counterparts, Smith boldly shaved her head on the sides to embrace the required, raw, and complete lack of vanity required to respectively play this part, as evidenced by the numerous bruises on her arms noticeable during the curtain call. Her role is extraordinarily physical and vocally demanding. Ever present, committed and believable, her “Aldonza” and “Dulcinea” are show highlights. Ms. Smith is a four time Jeff Award-winner, and after this, she might consider making mantel space for number five. Dazzling and powerful, her vocal range is unmatched. Being one of the few women trapped in this prison detention cell, she is also used as a punching bag more than once in this is very adult La Mancha. Ryan Bourque’s fight choreography is clearly broken down for the stage, but when the actors grab one another here, it is clearly with the intention to be authentic and alarmingly real. 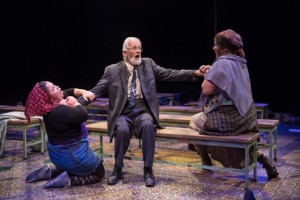 Rounding out this dynamite dirty dozen of a cast, Chicago favorites Lillian Castillo, Jonathan Butler-Duplessis, Bobby Daye, James Harms, Cassie Slater, Craig Spidle, Brandon Springman, Andrew Mueller and Matt Mueller, each a fantastic singer in their own right. Castillo and Slater play the competitive “I’m Only Thinking of Him” for cheeky laughs. Stampley’s “The Impossible Dream (The Quest)” is simply exceptional. The closing number “Finale” sung by the entire cast, as the reality of the leading man’s dementia takes its inevitable toll, brought both chills and a few tears to those sitting around me. Musical direction from Ryan T. Nelson with musical supervisor Patti Garwood and her orchestra of eight, resonates lovingly throughout the piece. Nancy Missimi real world contemporary costuming allowed full range of motion to a cast continually jumping, rolling, climbing, falling, and yes, even riding mop headed horses, across the stage. A tip of the “Golden Helmet” to all involved was well earned. The only impossible dream here would be to miss this alarmingly powerful, daring, rich and chilling robust production of Man of La Mancha. Go see this show.