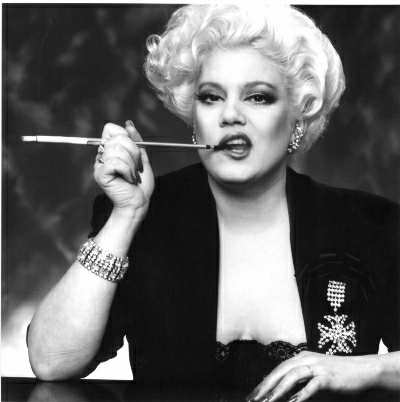 The Manhattan Association of Cabarets (MAC) will present Tony nominee Sharon McNight and Ruby Rims with its 2018 Lifetime Achievement Awards at the 32nd Annual MAC Awards to be held Tuesday, March 27 at 7:00 pm at B.B. King Blues Club & Grill in New York City.

Sharon McNight received a Tony nomination for Best Performance by a Leading Actress in a Musical for Starmites, as well as a Theatre World Award. She appeared in the Los Angeles production of Heartbeats and Nunsense in LA and San Francisco. On TV, she appeared on Seinfeld, Silk Stalkings, and Hannah Montana. She has been a mainstay on cabaret stages around the world. She received the very first MAC Award for Female Vocalist in 1987. She’s also the recipient of two Bistro Awards (1986, 2016). She began her cabaret career in the gay bars in San Francisco in the late 1970s. Her one-woman shows include Songs to Offend Almost Everyone; Gone, But Not Forgotten: Saluting the Late, Legendary Ladies of Song; and Soup to Nuts. In addition to her MAC and Bistro Awards, she has received four Nightlife Awards and four Cabaret Gold awards. Her one woman show, Red Hot Mama, based on the life of the first lady of show business, Sophie Tucker, enjoyed an Off-Broadway run at the York Theatre, and the concert version of that show won the BroadwayWorld.com award for best show of 2014. The Off-Broadway version began the 2017 season of the Cinnabar Theatre, Petaluma, and is part of the 2018 season of Seven Angels Theatre, Waterbury, Connecticut. She has a Master’s degree in directing, and was on the faculty of the Cabaret Symposium at Yale University and a guest teacher at the Eugene O’Neill Theatre Center.

​Drag performer extraordinaire Ruby Rims  received the very first MAC Award for Variety Performance in 1987. He, too, has been a mainstay on the cabaret scene since 1978, having appeared at The Duplex, Don’t Tell Mama, and Eighty Eight’s. He was the first drag queen to perform at the latter two clubs. In 1990, he started an organization called Teddy Care which brought the Cabaret Community together to raise money for AIDS organizations and collected Teddy Bears for children of all ages in New York City Hospitals. Over the years, Teddy Care collected over 10,000. After 25 years, he ended that fundraiser. He then started Ruby Rims and Friends Do the Can-Can, holding benefits to collect canned goods for the Food Pantry at Metro Baptist Church, where he volunteers every Saturday morning. In addition to five MAC Awards, Ruby has received the Channel 1 New Yorker of the Week Award (1997). He served on The Board of Directors for The Manhattan Plaza AIDS Project as well as that of Judson Memorial Church.


​Author James Gavin will receive the 2018 Board of Directors Award. His first book, Intimate Nights: The Golden Age of New York Cabaret (1991; revised and updated in 2006), an extensive history of cabaret in NYC, has become the go-to source for cabaret lovers. It won James his first ASCAP Deems Taylor-Virgil Thomson Award and rave reviews. He followed that with Deep in a Dream: The Long Night of Chet Baker (2002); Stormy Weather: The Life of Lena Horne (2009); and Is That All There Is?: The Strange Life of Peggy Lee (2014). In addition, he has written for The New York Times, Vanity Fair, Time Out New York, the Daily Beast, and Jazz Times. His subjects have included Annie Lennox, Elizabeth Taylor, Frank Sinatra, Nina Simone, John Legend, John F. Kennedy, Jr., Miriam Makeba, Marilyn Monroe, Mae West, Ned Rorem, Edith Piaf, Karen Carpenter, and Jacques Brel. His second ASCAP Deems Taylor-Virgil Thomas Award was for his 2015 feature for JazzTimes: The Gates of the Underworld: Inside Slugs’ Saloon, Jazz’s Most Notorious Nightclub. He has apepared in several documentaries, interviewed on numerous radio programs, and appeared on the Today show, Good Morning American, and PBS NewsHour. He wrote, narrates and hosts a show based on his Stormy Weather: The Life of Lena Horne, which has toured extensively and which stars former Supreme Mary Wilson. He has also created/hosted shows based on his other books which have featured Blossom Dearie, Nellie McKay, Jane Monheit, Mark Murphy, Andy Bey, Mx. Justin Vivian Bond and Kenny Mellman (sometimes known as Kiki & Herb), Spider Saloff, Oscar Brown, Jr., and others.

The 32nd Annual MAC Awards will be held on Tuesday, March 27 at 7:00 pm at NYC’s B.B. King Blues Club & Grill, 237 W. 42nd St. The show is produced by Julie Miller, and directed by Lennie Watts, with musical direction by Tracy Stark. Tickets are available at www.macnyc.com