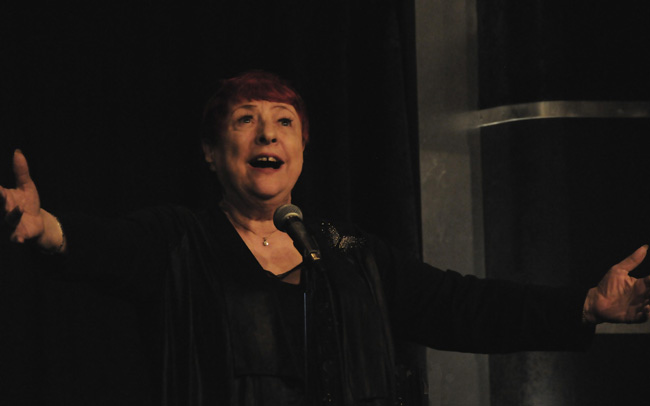 Vickie Philips is a cabaret artist who has been in the business for longer than she can remember. She started out because her favorite teacher told her to sing. Beginning with a trio in clubs, to Philly as a single act, fast forward to Canada, getting married, raising a family, coming back to amateur theatre productions, getting divorced and begining a second life in New York. A dream fulfilled. The first three years she was cast out of New York and touring. Making a commitment to stay in New York she studied with Elly Stone her idol, went to the Neighborhood playhouse and played every club in New York. Getting married a second time she was transported to Massachusetts. On and off she has been doing cabaret whenever her heart heard the calling.

T2C: What drives you to do Cabaret?

Vickie Philips: The one on one with an audience. Material you can create, people who ask you to sing their material. The creative forces that give cabaret it’s life. It’s such a specialized art.

T2C: How have you been acknowledge in this form?

Vickie Philips: Nominated for a MAC award, won two Cabaret Bistro Awards. Won an OBBR Award for Songs Are Like Friends an original cabaret presentation featuring the songs of my musical director Gerry Dieffenbach and Bob Ost. That was a wonderful thing because Gerry, Bob and I each won.

T2C: How many cabaret shows do you have under your belt?

Vickie Philips: Easily over a hundred. I mostly do Brel, Aznavour and Weill because cabaret is nothing without it’s European artists. This material changed my life. It unveiled the deepest truths of my soul. All these things were inside of me and until I heard them I never admitted the truth of them.

T2C: You also write music, why do you not do more of that or showcase it more?

Vickie Philips: I haven’t written anything since I left New York. I am too lazy to commit to that. Where I live does not inspire me.

T2C: When is your next show?

T2C: What advice do you give young cabaret performers starting out?

Vickie Philips: What is the song about… what is this song about. Lyrics should not be repetitious or strident. Pick a song with a strong melody. It if has meaning for you it will have meaning for an audience. If it’s an imitation that’s all it is.

T2C: If you were starting out again what would you do differently?

Vickie Philips: Come to New York earlier and not leave.

T2C: If you were to describe your life in a song, what song most says who you are?

Vickie Philips: “If We Only Have Love.”

T2C: What would like our readers to know about you?

Vickie Philips: I never dreamed at almost 82 years old I would be doing to the degree of what I am doing and believing in miracles.