Mariah Carey Gets a Second Chance For New Years Eve in Times Square. Will She Actually Sing?

Mariah Carey Gets a Second Chance For New Years Eve in Times Square. Will She Actually Sing? 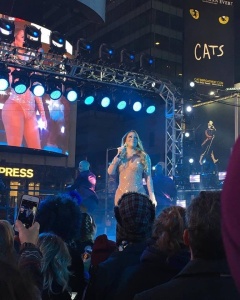 Who says there aren’t second chances. Mariah Carey is back to see if she can get it right this time and the producers of Dick Clark’s Rockin New Year’s Eve, are giving it to her. In a town where perfection is seen every night on a stage, it’s amazing that her dancers could perform, yet she could not. There are 8 monitor speakers on stage blasting out that backing track, but it played a track where she was suppose to sing it live. She had planned to lip sing the entire performance, which is a rip off anyway,  but instead of acting like a true performer on Broadway who perform when they are sick or injured, she just gave up and acted like a diva. She could have least done something with her dancers. Also she failed to show up for a sound check. She even admitted live that she did not have a sound check due to the fact it was New Years Eve. Carey’s own tech team had her in-ears “set to the wrong frequency” and she used a body double for rehearsals earlier in the day. She stood off to the side of the stage, while she had a stand-in do a sound check.

Now maybe I could be sympathetic had she not also botched the 2014 Rockefeller Centre’s tree-lighting ceremony. Again she butcher her own song, after an isolated vocal track (i.e. just vocals with the backing track removed). When the internet went brutal Ms. Carey claimed pharyngitis. Again she did not show up for the sound check.

Sensing a pattern here? Maybe this year Ms. Carey will show up for that all important sound check and is it possible that Ms. Carey will actually sing?

We leave you with a discussion right after last years debacle from” The View.” I agree why not Patti La Belle or Darlene Love, who actually always sing live.

Other performances include Camila Cabello, Nick Jonas and Sugarland.