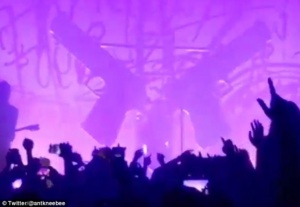 Marilyn Manson, 48 has been crushed by two falling guns right in the middle of singing Sweet Dreams. The props,  giant pistols, toppled on top of him and Manson was stretchered off stage. He had been performing for about an hour and 20 minutes at the Hammerstein Ballroom. 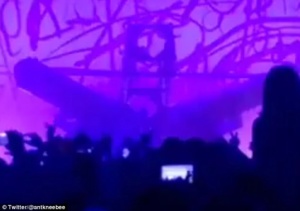 Manson is in the middle of promoting his new album, Heaven Upside Down. Just last week Manson told The Guardian that his career had suffered since the 1999 Columbine school shooting, when two teenage gunmen stormed Columbine High School in Colorado. The boys, who were both 18 at the time, were said to have been fans of Manson.

Video is curtesy of  BrooklynVegan

Suzanna BowlingDecember 11, 2017
Read More
Scroll for more
Tap
My View: An Important Message From Storm Large
Miley Cyrus Knocks it Out of the Park at Madison Square Gardens